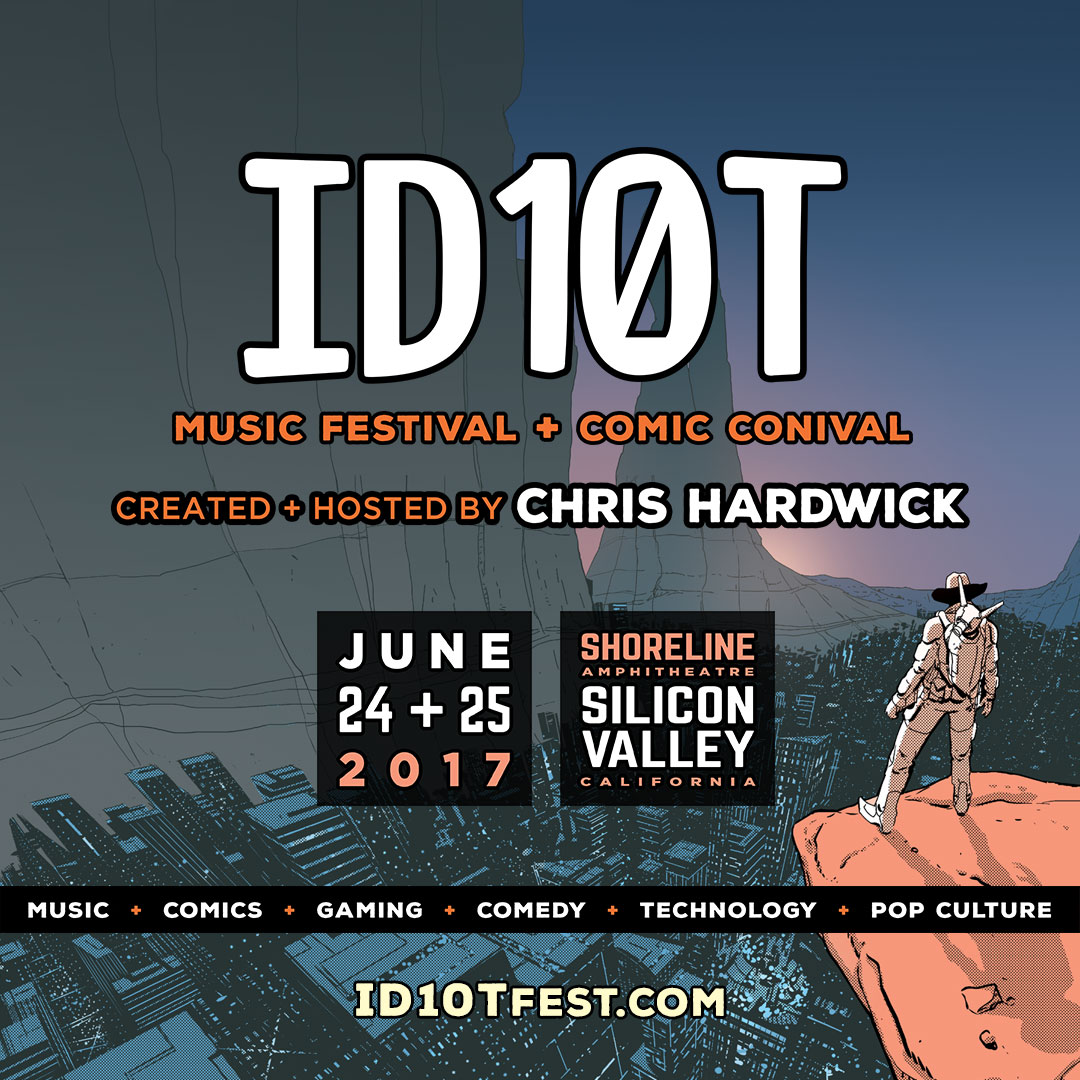 in Silicon Valley, CA at the Shoreline Amphitheatre and Surrounding Grounds

Los Angeles, CA (May 18, 2017) — ID10T Music Festival & Comic Conival, the groundbreaking first of its kind event that will combine chart-topping musicians, renowned comedians, makers, and some of the most influential people in the entertainment industry, together in one place for a once-in-a-lifetime weekend experience, has announced its first wave of panels, which include famed shows Portlandia, Mystery Science Theater 3000, Harmontown, and Stan Against Evil. A second announcement will be released soon, revealing even more exciting panels and guests. Created and hosted by Chris Hardwick, ID10T (pronounced I-D-ten-T) will take over the Shoreline Amphitheatre and surrounding grounds in Mountain View, CA on Saturday, June 24th and Sunday, June 25th.

Confirmed show panels and guests are as follows:

IFC’s Emmy-nominated comedy Portlandia is currently in production for its eighth and final season. Created by Fred Armisen, Carrie Brownstein and Jonathan Krisel, Portlandia explores the eccentric misfits who embody the foibles of modern culture, starring Armisen and Brownstein. The series is executive produced by Lorne Michaels and produced by Broadway Video.

For almost 30 years, the award-winning comedy television series Mystery Science Theater 3000, created by Joel Hodgson, has been known as one of the best cult TV shows of all time.Following its record-breaking #BringBackMST3K Kickstarter campaign, fourteen brand-new episodes of the cult television show Mystery Science Theater 3000 launched on April 14, 2017, exclusively on Netflix.

In the new season of Mystery Science Theater 3000 (aka MST3K) Kinga Forrester (Felicia Day) and her loyal henchman, Max (Patton Oswalt), have revived the infamous experiment started by Kinga’s father twenty-nine years earlier: How many cheesy movies does it take to drive a person mad?

In this latest reiteration of the show, her test subject is Jonah Heston (Jonah Ray), a space pilot for Gizmonic Institute who gets trapped responding to a distress call from the dark side of the moon. Confined aboard the Satellite of Love, Jonah lives with his robot friends, Gypsy (voiced by Rebecca Hanson), Tom Servo (voiced by Baron Vaughn), and Crow T. Robot (voiced by Hampton Yount). Confronted with Kinga’s choices in torturous films, Jonah and the bots band together to ward off lunacy by continuously riffing on the movies in rapid-fire succession.

Stan Against Evil, featuring guests John C McGinley, Janet Varney, and Dana Gould.
IFC’s original horror comedy series Stan Against Evil is currently in production for its second season. Created, written and executive produced by Dana Gould (The Simpsons, Parks and Recreation), Stan Against Evil stars John C. McGinley (Scrubs) and Janet Varney (You’re the Worst). Stan Against Evil follows Stan Miller (McGinley), a perpetually disgruntled former sheriff of a small New England town who was forced into retirement. Stan has trouble relinquishing his authority to Evie Barret (Varney), the tough and beautiful new sheriff in town, but they form an unlikely alliance when both begin to realize things are not quite right in their quaint New England town. Together, they valiantly fight a plague of unleashed demons that have been haunting the town, which just happens to be built on the site of a massive 17th century witch burning.

Information on tickets, pricing, VIP packages, and more is available at www.ID10TFest.com. ID10T boasts a massive festival area directly adjacent to the amphitheatre’s music stage.  All tickets including festival general admission, reserved seating and VIP have free roaming access to the festival area, which includes the Mad Decent Dance/Cosplay Tent, Monster Energy Comedy Tent, and full exhibitor village. Kids 10 and under are free with accompanying paid adult admission.
Each day, pop culture enthusiasts will have the opportunity to roam exhibitor booths, meet comic book artists, and catch their favorite TV and movie casts on back-to-back panels and podcasts, including a special live taping of Hardwick’s own Nerdist Podcast. In the evening, the grounds will transition into a music and comedy hall for live performances from some of today’s top artists and comedians. With panels from 12:30 p.m. to 5:00 p.m., comedy from 4:30 p.m to 8:00 p.m., and music from 4:00 p.m to 11:00 p.m., attendees can expect a full day packed with entertainment, all in an outdoor setting.