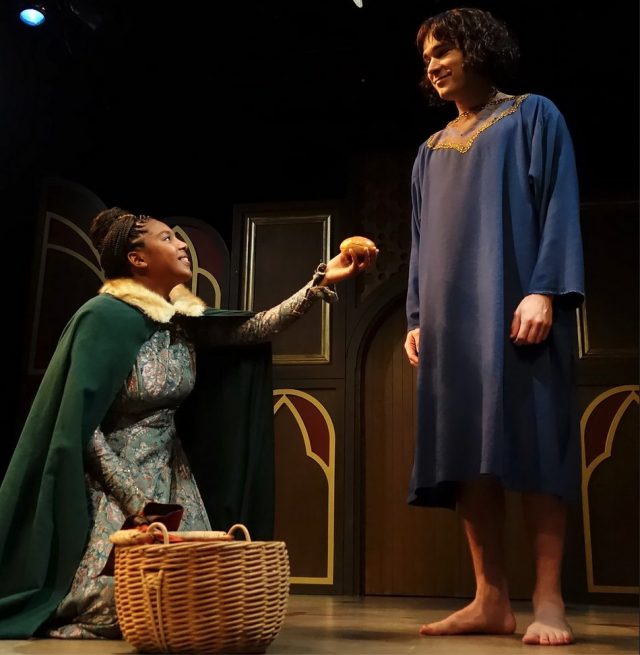 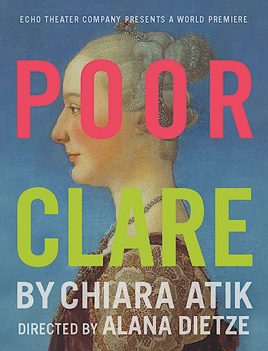 Los Angeles, CA (The Hollywood Times) 10/26/21 – This evening (October 25) was a continuation of the opening weekend of Poor Clare, the world premiere production of the Echo Theatre Company with associate artistic director Alana Dietz at the helm. Poor Clare is a play written by Chiara Atik – a powerful and very funny modern spin on the medieval story of Saint Clare of Assisi, who was convinced by Saint Francis of Assisi to give up her aristocratic heritage and adopt a life of poverty, austerity, and seclusion from the world.  Poor Clare opened the Echo’s 25th anniversary season with a six-week run, Oct. 23 through Nov. 29, at Atwater Village Theatre.

The story of St. Clare or Santa Clara is still a moving one. She founded the Order of Poor Ladies, a monastic religious order for women in the Franciscan tradition, and wrote their Rule of Life, the first set of monastic guidelines known to have been written by a woman. Following her death, the order she founded was renamed in her honor as the Order of Saint Clare, commonly referred to today as the Poor Clares. Clare was born in Assisi during the High Middle Ages in the 13th century. She was the eldest daughter of Favarone or Favorino Sciffi, Count of Sasso-Rosso and his wife Ortolana. Traditional accounts say that Clare’s father was a wealthy representative of an ancient Roman family, who owned a large palace in Assisi and a castle on the slope of Mount Subasio. Ortolana belonged to the noble family of Fiumi, and was a very devout woman who had undertaken pilgrimages to Rome Santiago de Compostela and the Holy Land.  Later in life, Ortolana entered Clare’s monastery, as did Clare’s sisters, Beatrix and Catarina (who took the name Agnes and was later declared a saint herself).

St. Clare, who came from a prominent noble Assisi family, wasn’t actually poor. She was a typical 18-year-old who was fussing with her hairstyle and planning her trousseau in preparation for marriage. Everything changed when she heard that a young man, Francis, (St. Francis of Assisi) had stripped nude in the town square to protest poverty. After befriending him, she ran away from her cushy life and ultimately started a religious community that stressed poverty, austerity and seclusion. Explains the playwright Chiara Atik, “I’ve always known about her,” playwright Atik said. “My family is from a nearby village in Italy. Clare was a happy unquestioning girl when she met Francis and was radicalized by him. She became concerned about poverty in her town and gave up everything to make a difference.  Ultimately her mother and sister joined her in the convent.”

Portraying Clare in Poor Clare is Jordan Hull, a most talented young actress, who is best known for her role in The L Word: Generation Q on Showtime. Here Jordan portrays a regular teenager living in 13th century Italy, trying out hairstyles and waiting to get married – until a man named Francis (Michael Sturgis) starts ranting in the courtyard. The ladies of the household were already gossiping about a young man who stripped naked in front of the main church in Assisi to protest poverty. Clare and her sister Beatrice (Donna Zadeh), worry about the latest styles, and gossip about boys with their live-in help (Kari Lee Cartwright and Martica De Cardenas). Together with their mother, Ortolana (Ann Noble), they do their best to be socially conscious and “give back,” donating leftover food to the poor (Tony DeCarlo) and organizing clothing drives. After meeting with Francis who has adopted a simple robe of grey cloth and eventually a tonsure on his head, young Clare becomes convinced that she must do more for poverty and give up the life of wealth and privilege which she has always known.

To create the play’s ambiance, Chiara Atik set the action in the 13th century, but made the dialogue contemporary so it would be accessible to a 21st century audience. “The play is an allegory about homelessness and wealth inequality in modern life,” said director Alana Dietze of the seven-character play. “Chiara [Atik] has drawn a line from Clare in 1211 to now without saying it outright. She managed to make this person, who did something most of us would consider unrealistic, relatable. We had a lot of discussions as to how Clare got to her decision by the end of the play.”

“Social inequalities are prevalent in cities today,” said Atik, who lives in New York City but is currently staying in Silver Lake. “Homelessness becomes a background. The play explores what happens when you stop and really notice.” “How do we give our lives meaning in the face of the insurmountable problems we see around us every day?” asks director Alana Dietze. “I love the way Chiara has drawn a line directly from Clare in 1211 to now, without saying it outright. She’s managed to make this person, who did something most of us would consider completely unrealistic, relatable. The system that created wealth inequality then hasn’t really changed. Listening to the characters, it feels like it could be me or any of my friends talking — which is really fun when it’s juxtaposed with period costumes and design.” Those costumes were designed by Amanda Knehans, which is evocative of the period with a hand-painted floor simulating marble. Costumes by Dianne K. Graebner are lush and period appropriate.

Chiara Atik’s other plays include Five Times in One Night, Bump, which was recently recorded for radio by L.A. Theatre Works, and Women, a mashup of Louisa May Alcott’s “Little Women” and HBO’s Girls. Founded in 1997, the Echo Theater Company has gained a reputation for producing and developing exciting new work. Under the artistic leadership of Chris Fields, the company has championed playwrights for a quarter century, producing and commissioning numerous world premieres and introducing Los Angeles to playwrights David Lindsay-Abaire, Adam Rapp and Sarah Ruhl among others.

Atwater Village Theatre is located at 3269 Casitas Ave in Los Angeles, CA 90039. On-site parking is free. For reservations and information, call (310) 307-3753 or go to www.EchoTheaterCompany.com.