Los Angeles, CA (The Hollywood Times) 9/8/21 – The American poet Robinson Jeffers built a house for himself, his wife Una, and his children near Carmel on the Monterey Peninsula, in California. The stone cottage known as Tor House was designed in imitation of traditional English rural cottages, but Jeffers added the stone tower as his writer’s retreat. It was in Tor House that Jeffers wrote all of his major poetical works: the long narratives of “this coast crying out for tragedy,” the shorter meditative lyrics and dramas on classical themes. Jeffers’ Tor House is a museum today and maintained by the Jeffers Foundation. Tor House docent Lucas Seastrom has produced an introductory film about Jeffers for poet Jimmy Santiago Baca to use at his speaking events. Many people at Tor House helped with its production.  You can view it on YouTube here: https://www.youtube.com/watch?v=CDERjvAfU-Q 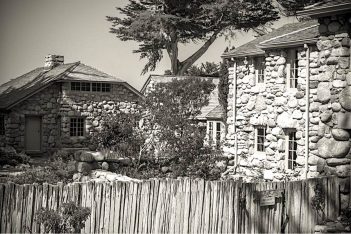 Robinson Jeffers (January 10, 1887 – January 20, 1962) was an American poet. known for his work about the central California coast. Much of Jeffers’s poetry was written in narrative and epic form. However, he is also known for his shorter verse and is considered an icon of the environmental movement. Influential and highly regarded in some circles, despite or because of his philosophy of “in humanism,” Jeffers believed that transcending conflict required human concerns to be de-emphasized in favor of the boundless whole. This led him to oppose U.S. participation in World War II, a stance that was controversial after the U.S. entered the war.

Born in Pennsylvania, Robinson Jeffers attended Occidental College here in Northeast Los Angeles and later the University of Southern California. He dropped out of USC medical school due to a rather scandalous love affair with Una Kuster, the wife of a prominent Los Angeles attorney. Jeffers and Una left for Europe and later returned to live in Carmel, California, by the sea. The two were married eventually in 1913 and lived in the stone Tor House and Hawk Tower in Carmel, which is now a museum of sorts. In the 1920s and 1930s, at the height of his popularity, Jeffers was famous for being a tough outdoorsman, living in relative solitude and writing of the difficulty and beauty of the wild. He spent most of his life in Carmel, California, in a granite house that he built with his own hands which they named “Tor House.”

During this time, Jeffers published volumes of long narrative blank verse that shook up the national literary scene. These poems, including Tamar and Roan Stallion, introduced Jeffers as a master of the epic form, reminiscent of ancient Greek poets. Many books followed Jeffers’s initial success with the epic form, including an adaptation of Euripides’ Medea (1947), which became a hit Broadway play starring Dame Judith Anderson. D.H. Lawrence and Edgar Lee Master were close friends of Jeffers.

University professors of 20th-century American poetry tend to focus on the work of Ezra Pound, T. S. Eliot, Hart Crane, Wallace Stevens, and William Carlos Williams. Somehow Robert Frost has slipped a bit in status and certainly most students of modern American poetry tend to shy away from the poetry of California poet Robinson Jeffers. I have always found it interesting that Robert Frost, who is usually associated with New England, was born and grew up in San Francisco in California. Robinson Jeffers with his understanding of nature and love of the rugged California coast was a precursor of Theodore Roethke and AR Ammons. As one critic has explained: “Jeffers was the only modern poet to read and understand evolutionary theory and cosmology.”