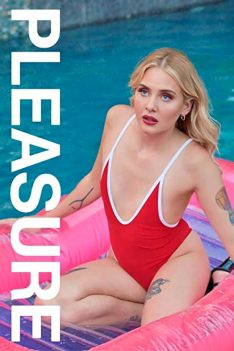 Los Angeles, CA (The Hollywood Times) 5/12/22 – At the annual AFI Film Festival, there is almost always a special place for a shockingly explicit film about sex and power. This year’s plum pick was Ninja Thyberg’s Pleasure (Sweden, 2021), which comes with a trigger warning for its depiction of sexual violence. Pleasure is currently screening at the Landmark Nuart in West Los Angeles and will soon be shown at several Laemmle Theatres in Los Angeles. The Swedish director expanded her 2013 short film by the same name, set amid the adult-film industry, but takes the action to Los Angeles, a production hotspot for this type of content. 19-year-old Linnéa leaves her small-town life in Sweden for Los Angeles to become a big porn star. When asked at the airport whether she was in Los Angeles for business or pleasure, Bella Cherry (Sofia Kappel) answers, “pleasure,” followed by a small, unreadable smile. Pleasure’s writer-director Ninja Thyberg gives us a look into the life of a sex worker through Bella. What Bella quickly learns is that in order to get to the top, she’ll have to cross lines she never wanted to. This film premiered at Sundance 2021 and has been picked up for distribution by Neon.

Thyberg adopts a documentary approach, observing the shoots with an almost clinical precision with none of the detail spared – from rampant erections to fetish gear, ejaculations, and personal plumbing. Once the scenes are finished the men are sometimes observed as considerate and caring for their co-star’s welfare – especially after one scene in which the girl is roughed up by two males, leaving her in a state of physical pain and mental anguish. And Bella seems unclear in her mind as to why she is doing rough sex scenes with violence. Even if the scenarios are fictional and those involved in the production are accommodating when the cameras are not rolling, she is scarred by the hardcore degradation and psychological torture.