Los Angeles, CA (The Hollywood Times) 3/1/22 – Screening on Monday night at the Motion Picture Academy Museum in their retrospective film series was a lesser-known film of Pier Paolo Pasolini – Pigsty (Porcile, Italy,1969), a dense allegorical film that reflect the politics of the late 1960s in Italy. Pasolini wasn’t only an intelligent filmmaker, but also a passionate one, and his zest for his ideas is as pervasive here as ever, so even when one cannot quite keep up with him, he’s still roping you in. Following two parallel stories – one in which a lone scavenger searches a ruined landscape for any trace of food before turning to cannibalism, the other concerning two bourgeois young lovers in conversation about relatively minute issues – Pasolini’s overall condemnation of the wealthy is pretty evident, along with his inquiry into the societal structures that keep the lower classes low. 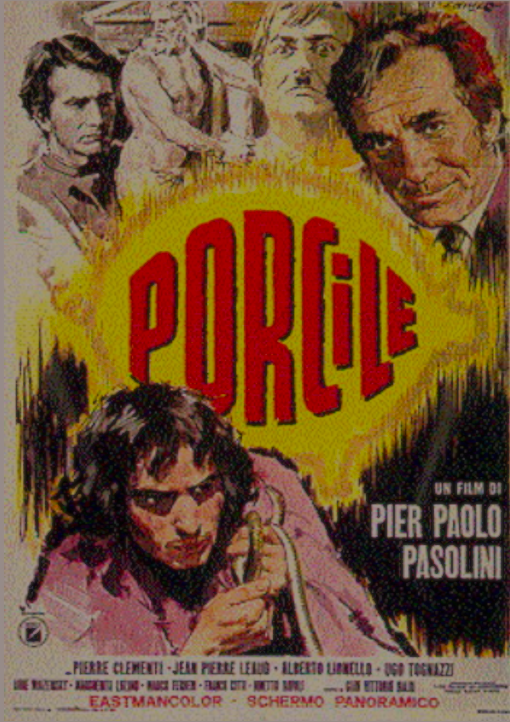 Pigsty is a film deliberately split into two very different scenarios. One shows the son of a bourgeois post-war industrialist who finds solace in bestiality while the other shows an almost narratively unconnected story of a young cannibal who forms a group and terrorises passing locals before being executed.

In the bourgeois section, Pasolini casts some very charismatic performers, most notably Jean-Pierre Léaud (best known for playing Antoine Doinel for Francois Truffaut, later starring in Masculin, féminin for Jean-Luc Godard). Léaud is one of those guys incapable of being uncinematic, so all his directors really had to do was point the camera at him to achieve any desired effect. The cannibal section of the film is a little less reliant on performance, but the raw savagery of Pierre Clémenti on display (extending well beyond their dining options) is plenty to keep the curious viewer intrigued.

Cast out the rich and powerful liars, opportunists and all varieties of swine in the world to be eaten and ultimately prove useful as nothing more than nutrition for the genuine and righteous. Pasolini takes us into an industrial hog farm with all of its daily filth and ugliness, traits that civilized societies go to great lengths to conceal as older generations live in a perpetual cycle of having the wrong priorities and possessing outmoded ideals. The rich and bourgeoisie of Porcile live in mansions far off on the horizon while the poor live on the black rocky slopes of an active volcano subsisting on butterflies, beautiful castoffs that got lost on their way back to the flower rich lands of the upper class.

A young man played by French actor Pierre Clémenti (known for Buñuel’ s Belle de Jour) born into the black lands of hardship and sulfur looks off into the dunes and sees a Seventh Seal procession reminding him of the certainty of his death. He is crawling around this volcanic landscape of Mt. Vesuvius, foraging for food and eventually killing a stray soldier in order to eat his body like a cannibal. Later he is joined by a fellow outcast (Franco Citti), as they capture some young women as sex slaves and cook the bodies of soldiers escorting them. Later, they are seduced by a naked young man and woman on the volcanic precipice, who were set up as decoys by armed soldiers who will capture them. These poor damned souls will die naked among the black lava stone, brutally beaten and shot. Primitive forms of crucifixion are taking place on the prehistoric slopes of the volcano. The messianic figure of the young cannibal (Pierre Clémenti) laments the course of his life and confesses to the killing of his father, the eating of human flesh, and the quiver of joy that only comes with sexual acts that the poor are secretly taught to demonize out of the self-interest driven coercion of the affluent.

Meanwhile a German industrialist Mr. Klotz (Alberto Lionello) plays the harp and admires the art in his palatial residence, while his aimless son Julian (Jean-Pierre Léaud toys with his girlfriend Ida (Anne Wizaemsky). The privileged class of Germans (speaking Italian) whistle while they admire works of art on their wall and worship comfortable gods, both luxuries that only the affluent have the time or resources to entertain. Inside the “Italianized villa” on the horizon, Jean-Pierre Léaud is engaged in a Godardian display of bourgeoisie intellectualism, oblivious to the games of savage survival that are carrying on off past the horizon while he is afforded the comfort to make his ideals known going to Berlin for an anti-Vietnam rally and by pissing on the Berlin wall. Eventually, his personal indiscretions will haunt him and he falls into a coma, laying in bed, no longer part of this world. The exact nature of those indiscretions will not be revealed until the end of the film – but we sense that they are somehow related to pigs in a pigsty.

Mr. Kotz and his wife (Margarita Lozano) eat in grand halls filled with unappreciated intricacies that adorn every surface with impractical exhibitions of wealth. It takes the young intellectual, Julian, a significant portion of the film’s runtime to get from their extravagant dining halls to the front door, passing through vast corridors of lavish columns. Eventually Mr. Kotz is informed that there is a competing industrialist Mr. Herdhitze (Ugo Tognazzi) who made his fortune exploiting Jews during World War II and now a successful businessman with factories that make buttons. Eventually they agree to join their businesses together and at that point we discover that Mr. Kotz’s son Julian visits an industrial-style pigsty everyday with his own personal obsession with bestiality where we are told Julian met his end.

While Pasolini’s poetic metaphors will not all make themselves immediately apparent when viewing Porcile, his ideologies and playful sense of satire are abundantly clear. There are many groups that have been assigned the label of “pig” and didn’t deserve it and other pigs that avoided their warranted label through acts of barbarism and intimidation. Whoever the pigs are, in Pasolini’s world the subversives and undesirables that find themselves in the world of the rich will eventually find themselves in the belly of those pigs so the rest of high society can fatten their bellies and engage in acts of cannibalism by proxy. It still seems like it would be more desirable to live in the mansions on the horizon despite its populace of murderers, perverts, and wannabe cannibals; the volcanic landscape makes for a dreadful hellish end.