Atwater Village, CA (The Hollywood Times) 9/16/18 – MacArthur Fellowship (the “genius grant”) winner Branden Jacobs-Jenkins drew on his time as an assistant at the New Yorker magazine for his blistering, darkly comic “Gloria.” He was a mere 31 years old when he got a Pulitzer nomination for the play in 2015. Its voice is an amalgam of David Mamet, Neil LaBute and Aaron Sorkin – scorching dialog delivered at a ferocious pace, a highwire act for actors in a small repertory. The Echo Theater Company pulled it off beautifully on opening night at the Atwater Village Theater. 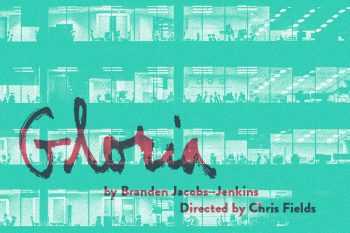 “Gloria” is set at the intersection of art and ambition, at the cusp of the digital revolution. The editorial assistants of the play’s unnamed magazine all want to be writers in a world where the printed word is dying and writers are being replaced by “content creators.” “We are treating our storytellers like they are workers in an Amazon warehouse,” commented cast member Sturgis.

On a simple open office set, we meet the aspiring storytellers who are clawing and scraping for a place in the contracting publishing world: Ani, Dean and Kendra. Later, we will meet a few more coworkers: intern Miles, fact checker Lorin, and a copy editor – the titular Gloria.

“I will die if I turn 30 in a cubicle,” moans ladder-climbing Kendra (Jenny Soo.)

“Let me help you with that,” retorts bootlicking Dean (Michael Sturgis.)

They are competitive and bitchy and petty… if you didn’t hate millennials when you walked in, you will certainly hate them by the middle of Act One. But at the end of Act One, Something Happens. And the play goes into an entirely new direction.

“Gloria” asks a lot of its actors. Most play multiple characters, dialog is delivered at warp speed, and everyone gets a showstopping monolog. Even on opening night, this cast was up to the task. Especially noteworthy were Soo’s Kendra, Devere Rogers (as Miles, Shawn and Rashaad) and Steven Strobel as Lorin. As director Chris Fields said, the trick to presenting a fast-moving, dialog-driven play like “Gloria” is “have a great cast.” This group was able to bring all the humor and all the pathos to the fore. 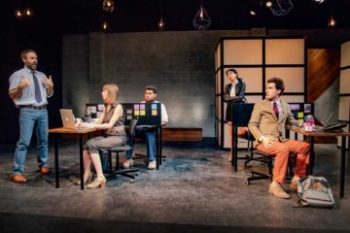 Branden Jacobs-Jenkins is an important new voice in theater; he has already won the PEN Theatre Award, the Windham-Campbell Prize for Drama, the Steinberg Playwriting Award, and the inaugural Tennessee Williams Award. This production is a great introduction to his work.

Presented by the Echo Theater Company