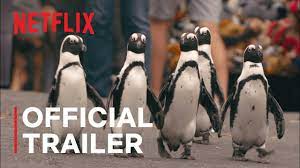 Los Angeles, California (The Hollywood Times) 6/13/2021- Tuxedos, hijinx, love triangles … we aren’t talking about “Dynasty.” It’s the new Netflix doc series “Penguin Town” (available for preview on your Netflix account, premieres June 16).  From the creators of the acclaimed series “Secrets of the Whales” comes this new funny, quirky real-life story that takes place in Simon’s Town, south of Cape Town, South Africa where African penguins here have adapted to heat and can travel long distances.  While humans apply sunblock and wax their surfboards, these penguins are causing traffic jams in the streets and bringing mayhem to this tropical paradise with a very specific mission: find a mate, make babies and not go extinct! The Hollywood Times spoke with Cayley Christos- Owner of Red Rock Films International and Field Producer for Penguin Town.

When was the first time you encountered penguins?

I grew up in Johannesburg, a quick 2-hour flight from the penguins. I think the first time I saw them was when I was around 2 years old, and we went on a family holiday to Cape Town. Of course for any young child, and definitely for me, it was such fun to be able to walk on the beach with penguins and splash in the water as they march and stumble around you!

Was it love at first sight?

Absolutely, and I have been back to Simons Town many times since with friends and family over the years. It is amazing to take people there. A trip to Cape Town includes a hike up Table Mountain, a visit to the fabulous vineyards, and then a “By the way, you can swim at a beautiful beach that has PENGUINS!” It is always a highlight!

What led you to Penguin Town?

I can’t take credit for this one, my Red Rock Films business Partner Alexander Sletten and the Lead DP of the show created the concept. He was looking for a charismatic animal that could carry a reality-style series when he remembered the penguins we had visited a few years before. I remember him starting to put it together and then saying “How has no one done this yet? These penguins are amazing and they are walking in the sunshine through a frickin’ town!”. When Netflix gave the show the go-ahead, I couldn’t wait to get back down to Simons Town to see the penguins again. Alex and I had so much fun finding locations and starting the “casting” process. I was sending daily video clips to my mom of penguins falling downstairs and tripping over their feet, and she kept leaving me voice notes of her laughing hysterically. We just knew it was going to be heaps of fun to make.

You spent nine months filming the tuxedoed birds’ shenanigans and allowing them to roam freely through your home. Tell us about your memorable moments.

We first selected the home we stayed in because we knew that penguins had been nesting in that garden for years. I remember a few weeks in, we were sitting in the house  Penguin Town is a Red RockFilms International  and Red RockFilms co-production for Netflix

https://www.redrockfilmsinternational.com/ & https://redrockfilms.net/ with the doors open working on our laptops when Alex (Sletten) very calmly said “ Don’t make any sudden moves, but there is a penguin behind you.” As I slowly turned around, the penguin looked up at me and then waddled away into the bedroom to have a look around before leaving. We were so excited and pretty much never closed the doors again! Our favorite “penguin in the house” moments all came from Cindy Crawford – a penguin who you will meet in the show as Lord Courtyard’s stalker. She was completely comfortable in the house and obsessed with her reflection. Every time we walked into the house we would find her transfixed at some new shiny surface. Be it a window, a fridge, the oven, and even once a mirror! It is important for me to say here that we respected that these are wild (and endangered!) animals, and so instead of seeing them as a guest in our home, we began to act like a silent shadow in theirs, giving them space, keeping quiet around them, not making sudden movements and giving them the freedom to do what they wanted, even if that meant leaving fishy penguin bombs everywhere.

Penguins are known for causing traffic jams and bringing mayhem to the tropic paradise. Do penguins have a sense of humor?

Without anthropomorphizing too much, which is hard not to do with such expressive animals, we definitely felt each penguin had a very distinct personality. The car park gang were truly bullies, and you just knew when they were up to no good as they would skulk into the Bougainvillea’s garden with their heads drooped low and shoulders hunched. Little Petal was so brave, even though she was tiny compared to everything else around her she would lift her head high and lunge at anything that tried to mess with her or her brother Twig. A sense of humor? I don’t know? But they certainly enjoyed nipping at the camera team’s backs when they weren’t looking!

What surprised you the most while filming?

Red Rock Films is one of the world’s largest producers of wildlife and natural history content, so our team has seen a lot of amazing animal behavior around the world. With these African Penguins, I was surprised that such a resilient strong animal can be endangered, and struggling so much to just survive. In our research for the series, we learned that overfishing, climate change, and habitat destruction have drastically reduced the African Penguin population to just 2% of what it was 100 years ago. As a production company, we strive to inspire people to care about the natural world on screen. But behind the camera, we are also committed to reducing our impact on the environment. So our team and entire crew ate no seafood on production and followed a plant-based diet for 8 months to do our small part. Red Rock Films International also donated signs to the city to get visitors to check under their cars for penguins before driving off (penguins wander the city streets and like the shade under cars!). We worked with amazing people from the City of Cape Town, Cape Nature, and Sanccob who all do incredible work with the penguins and I hope this series gets them the attention and help they need to keep this species from going extinct.

You are a self-proclaimed “safari addict.” Tell us more.

I have been lucky enough to spend time in some of Africa’s most unique wild places and witness some pretty extraordinary things. You can watch or study animals your whole life and you will never see it all, from unique behavior and beautiful natural events to crazy interspecies interactions. While filming Penguin Town, our Red Rock Films team was lucky enough to see an interaction between a caracal and penguin that we could only have dreamed of – all thanks to lockdown! With no people around, the usually elusive caracal came out of the mountains and walked right down the usually crowded road in front of us – in the middle of the day. It was amazing to witness. Nature and wildlife are addictive. My advice to everyone would be to take a little time to appreciate nature, wherever you are, no matter how small. You never know what you might discover.

What is your next project?

Hopefully Penguin Town Season 2! But we are also working on a blue-chip documentary about a Wolverine (not the X-Men) and have some other reality-style animal series up our sleeves!

and Red RockFilms co-production for Netflix