Los Angeles, CA (The Hollywood Times) 1/16/22/- The story of On the Water is based on the book of the same name by Olavi Ruitlane (who also serves as screenwriter) and revolves around the adventures and misfortunes of a mild-mannered teen called Andress (brilliantly played by Rasmus Ermel), growing up under the guidance of his caring grandmother (Maria Klenskaja) and his cynical, grumpy grandfather (Kalji Orro) in 1982’s rural Soviet Estonia, at the end of Leonid Brezhnev’s rule. A poignant script, attractive production design and appealing performances bring something fresh to familiar coming-of-age tropes in On the Water. Estonia’s submission for the international feature Oscar, the film unfolds in rural Soviet Estonia in the early 1980s, during a pivotal year in the life of the shy teen protagonist that finds him slowly unlocking his potential. The touching yet never sentimental screenplay by Olavi Ruitlane is based on his own best-selling novel. Balancing gentle humor with the hard facts of life, Estonian director Peeter Simm (Ideal Landscape, Good Hands) finds strong visuals and the correct tone to deliver the story. On the Water can be seen online at the moment as part of the Scandinavian Film Festival Los Angeles at: https://www.sffla.net/

Some 40 years ago, this sort of film would have been a staple at every international film festival, but the film does seem old-fashioned. 12-year-old Andress (Rasmus Ermel, whose striking blue eyes contain pools of melancholy) lives near the banks of Lake Tamula, on what would be the wrong side of the tracks, if there happened to be a railroad. His neighbors include brawling alcoholics, grifting prostitutes and cranky, crippled war veterans. The ramshackle houses are heated with firewood and some still make do with an outdoor privy. 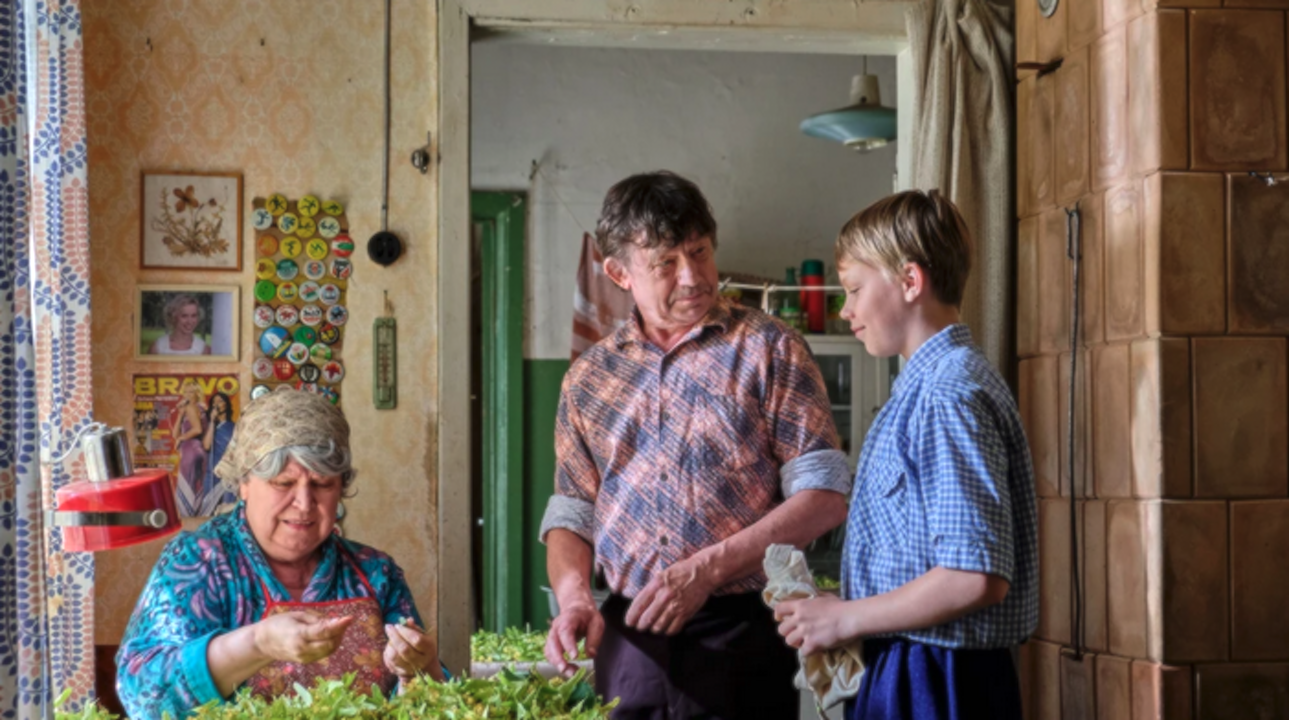 Andres lives with his strict grandparents (Maria Klenskaja, Kaljo Orro), who come from the “spare the rod and spoil the child” school of child-rearing. Spoiling is firmly out of the question as they hide the toys and chewing gum his absent mother sends from Sweden, doling them out, little by little. The grandfather, whose word around the house is law, tries to discipline Andres’ mind with chess and despairs at his report cards.

The lack of a mother figure plays a crucial role throughout the film. Early on, we learn that the woman presumably is in Sweden. At times, Andress sees her in his visions and her resemblance with ABBA’s Agnetha Fältskog from the famous Swedish pop group is playfully exploited. Andress, more or less in line with the leads of many other coming-of-age flicks, deals with the issues typical of his age: bullies, peer pressure, puberty and problems at school. His only friends are his fishing pole, his books and the “bigger kids” (misfit adults) living in his neighborhood. Fishing and spending time with them represents for the young boy a way out of the dullness of his everyday life.

While the film’s themes are definitely not the most original, three things make this piece stand out from the rest of the genre: the Estonian SSR setting, curious for a coming-of-age picture, well rendered by excellent production design; the numerous echoes from the 1970s and 1980s late Soviet comedies, particularly visible in terms of style, score and comedic devices; and the sporadic but effective presence of black humor. The director Peeter Simm was born in 1953 in Kovlöli, Estonia SSR in what was then part of the Soviet Union. A veteran of Estonian cinema and an alumnus of the Moscow State Institute of Cinematography, Simm rose to fame thanks to his 1980 directorial debut, Ideal Landscape, which was banned during the Soviet Union years and was subsequently dubbed one of the best Estonian films of all time.

Vee peal or On the Water is the title of a fairly recent autobiographical novel by Olavi Ruitlane, which has been likened to a new Kevade (Spring, the beloved 1912 novel by Oskar Luts). Vee peal is set in the small southern Estonian city of Võru, the author’s home town, in the 1980s and describes his passion for fishing, as well as a plethora of colorful characters he fishes with and who influence his life.

It’s 1982 (we find out at the end of the film when Brezhnev dies), the Estonian SSR. A young boy Andress lives with his grandparents in a small rural village by Lake Tamula. His father died or disappeared while working in Russia, but the mother fled by ship to Finland and now lives in Sweden, the homeland of the ensemble ABBA. At school, Andress is harassed, but at home his grandfather punishes him with a belt, so he finds solace in the water of the lake. Andres’ only friend is Kola (Aarne Soro), who has “idiot papers” in his pocket – meaning he had been institutionalized in a mental hospital in the past. Andress likes to go fishing with Kola, and in the winter, they go ice fishing out on the lake. When his grandfather falls ill, Andress begins to apply himself harder in school and overcomes his distractedness. He believes that if he does better in school, his grandfather will regain his health.

With the coming of spring, the smell of linden flowers is in the air and Andress begins to discover an interest in girls. At the lake, while collecting linden flowers, Andress watches naked women change clothes in the beach locker room. There he also sees his schoolmate Maria, and seems to fall completely and awkwardly in love. These are still Soviet times and we see people standing in line at the butchers for hours, waiting to buy sausages. There he builds up the courage to ask to see Maria later. Andres is taken under the wing of a tough older man Walter (Marko Matvere), an alcoholic, ex-con neighbor who teaches him how to box and counsels him on how to get Maria’s attention. Director Simm and lead Ermel convey the adolescent angst surrounding Andres’ tender, but alas temporary, summer romance with Maria (Aurora Aleksandra Künnapas) with convincing authenticity.

Although there is no composer credit, the soundtrack makes affecting use of pre-existing music arranged for accordion and performed by actor Marko Matvere and Henn Rebane. The ABBA song “S.O.S.” also makes a witty, repeat appearance. The touch of magical realism in On the Water is found in the wistful images of Andress’ missing mother who disappeared to Sweden and seems to have morphed into the very image of Agnetha Fältskog from ABBA.