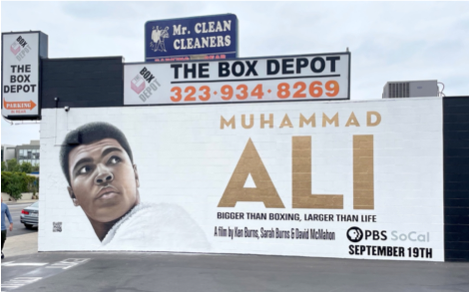 Los Angeles, Calif. – September 1, 2021 –  PBS SoCal has joined in a special collaboration with Transformative Arts to design an immersive artist series for the upcoming broadcast of Muhammad Ali.  The new four-part documentary series from Ken Burns, Sarah Burns and David McMahon premieres nationally on PBS and regionally on PBS SoCal Sun., Sept. 19 at 8 p.m. PT.  KCET will host a marathon of all four episodes back-to-back on Saturday, September 25 starting at 2:30PM PT. The series will also stream on PBS.org and the PBS Video App. Members of PBS SoCal and KCET get extended access through PBS Passport as well as digital content available at pbssocal.org/ali.

MUHAMMAD ALI, the Burns documentary, explores the boxer’s life from his childhood in a segregated Louisville, KY through his three world championships and death from Parkinson’s disease in 2016. During his time in LA (1979 – 1986), Muhammad Ali lived in the historic Larchmont Village, which is centrally located in the city. It was there that his boxing career ended in 1981, but he continued to be a central part of Black social, cultural and political life, becoming a global symbol as a fully realized Black Muslim man.

“Ali was an artist,” Burns said. “As a boxer, he transformed the sport with his speed and grace, as a man he challenged us to think about the world differently and proudly spoke about the power of love. He early on recognized that he could use his platform to speak for those discriminated against and at home and abroad, and refused to tolerate racism directed at him or others.”

Transformative Arts is an organization that supports and works with artists in the neighborhoods of Los Angeles to establish pathways that reconnect art and creativity to daily life. With a focus on freedom, equity, accessibility, the African Diaspora and justice, the uniqueness of their work serves communities by building visual language that speak out stories and opportunities that foster visual literacy.

“The ALI TO LA project brings together six Los Angeles-based contemporary artists, and one featured artist in Paris, to create and respond to work that highlights Muhammad Ali’s time in LA and his years of service to Black and Brown communities worldwide,” explains Transformative Arts founder Jill Moniz. “Ali’s footwork, word play, philanthropy, community-building, resistance and refusal, and his demand to be appropriately called by his name, are some of the many radical acts that our artists are talking about with one another and expressing through their work for the project.”

Featured artists of the ALI TO LA project include Edgar Arceneaux, April Banks, Kendell Carter, Veronica De Jesus, Manuel Lopez, Mariangeles Soto-Diaz and Kuamen. Each artist has incorporated studies of Ali in the ring, in conversation and through historic media, and has expressed their response to his legacy in LA through unique, site-specific work that includes photo-based objects, sculptures, paintings, drawings and collages. Their process of creating is also documented through a series of videos that showcase special interviews with the artists as well as legendary LA and national icons supported by historic Ali footage, words and images that prove his impact on Los Angeles and the world.

Artist Edgar Arceneaux adds, “The work I am creating for ALI TO LA draws analogies between the fracturing of the mind and the mirror as a reflection versus the mirror as us – the scratches, marks and abrasions of a life. The work tries to capture the brutality of Muhammad Ali’s profession as well as the poetics of the fracturing of his mind due to boxing induced Parkinson’s disease. Even so, those fragments are still unified and Ali will always be Ali”

The ALI TO LA series is free and open to the public Monday through Saturday, from 12PM – 6PM PT. The final exhibition will take place on Saturday, September 18, and will feature a sound component by Transformative Arts’ artist-in-residence, Évora NAU, and a LIVE performance by Mariangeles Soto-Diaz.

To learn more about the Muhammad Ali film on PBS, visit: https://www.pbs.org/kenburns/muhammad-ali/ and follow @PBS and @PBSSoCal on social media.

PBS SoCal is a donor-supported community institution that is a part of Public Media Group of Southern California, the flagship PBS station formed by the merger of PBS SoCal and KCETLink Media Group.  PBS SoCal delivers content and experiences that inspire, inform and entertain – over the air, online, in the community and in the classroom. We offer the full slate of beloved PBS programs including MASTERPIECE, NOVA, PBS NewsHour, FRONTLINE, Independent Lens, a broad library of documentary films including works from Ken Burns; and educational PBS KIDS programs including Daniel Tiger’s Neighborhood and Curious George. PBS programming is available to stream on the FREE PBS App on iOS and Android devices, Roku, Amazon Fire TV, Apple TV, Android TV, Samsung Smart TV, and Chromecast. PBS SoCal is also available to watch live on YouTube TV.

Transformative Arts was founded in 2006 by two foreign-born American citizens, Dr. Jill Moniz and Dr. Carlos Silveira. The organization works with neighborhood artists in Los Angeles and elsewhere to reconnect art and creativity to daily life. With a focus on freedom, equity, accessibility, the African Diaspora and justice, Transformative Arts projects refuse hierarchies in the art world and beyond to elevate the power to make visual language, collectively and collaboratively, in our communities and for our communities. With partnerships in Portugal, Paris and Italy as well as collaborations with passionate groups of LA arts professionals, Transformative Arts features robust, strategic programming that builds and sustains visual literacy for the common good through art-making initiatives. For more information, visit: www.TransformativeNow.org.