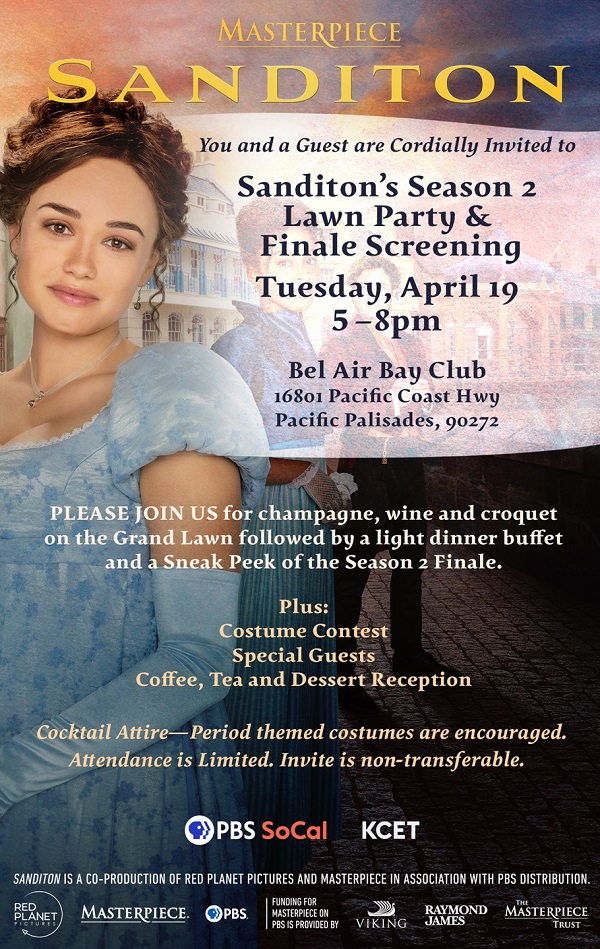 PBS SoCal and KCET on Tuesday, April 19 from 5-8 p.m. at the Bel Air Bay Club (16801 Pacific Coast Highway, Pacific Palisades, 90272) for a lawn party and screening of the Sanditon Season Two Finale. Champagne, wine and light bites were served on the Grand Lawn and followed by a light dinner buffet prior to the screening.

The Hollywood Times was honored to be invited to this exclusive club event.  We were welcomed with Valet parking and the staff of KCET/PBS SoCal had Masterpiece red socks and cool looking Masterpiece pens.  After checking in we headed down the stairs to be welcomed by JP Shields, Senior Director, Communications & Publicity KCET/PBS SoCal, who was dressed for the occasion.  We have not seem JP since February of 2020 and it was wonderful to see him.

Guest were dressed in Jane Austen-style 1800’s period themed costumes. Many were handmade to detail and were amazing!

We even had a surprise guest via Zoom. It was actress Rose Victoria Williams (an English actress from Ealing, London), who plays Charlotte Heywood.  She wanted to thank us for coming to the screening and for all of our support we have shown for watching the series.

There was a trivia contest with giveaways as well as a costume contest.  The winners were all deserving as they had original Sanditon theme dresses and first place winners made their costumes. 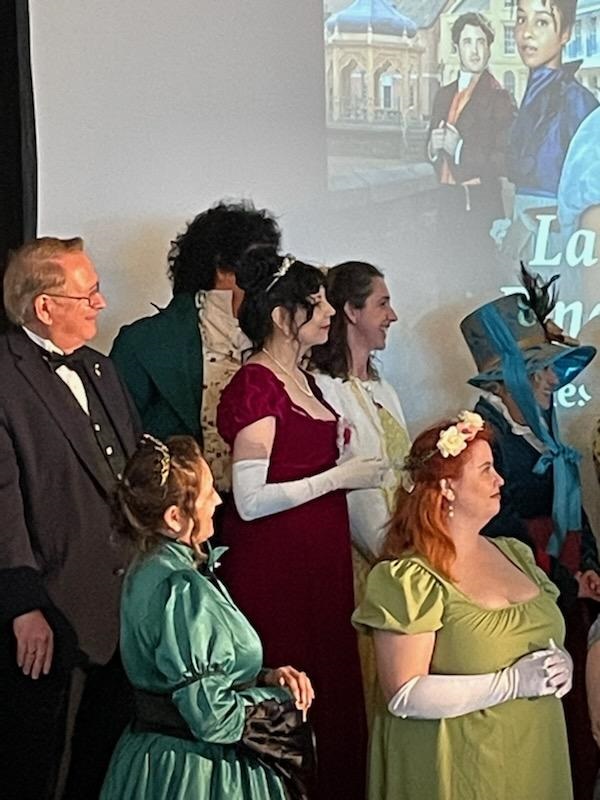 Buffet style dinner with two types of green salads, grilled fresh vegetables, small roasted potatoes and delicious barbequed chicken we all enjoyed during the screening of Sanditon Season Two finale, which is airing this Sunday, April 24 at 9/8c, click here to watch a preview of Season 2.

KCET/PBS SoCal always put on the best events ever and The Hollywood Times loves covering them.

Sanditon, the fan-favorite drama inspired by Jane Austen’s final, unfinished novel is back for Season 2, airing on Sundays at 9/8c now through April 24, 2022. The story continues with its high-spirited heroine, Charlotte Heywood, returning to the picturesque coastal resort of Sanditon and the companionship of her friend Georgiana Lambe. What adventures, scandals, intrigue and above all else — romance — await Miss Heywood this season?