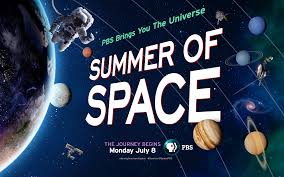 In celebration of the 50th anniversary of the Apollo 11 moon landing, PBS is dedicating July 2019 to commemorate the wonder and awe of the universe with its previously announced “Summer of Space” multiplatform experience, including a month-long line-up featuring six new science and history programs.

Commemorating America’s journey into space, viewers can also watch on PBS stations, PBS.org and the PBS Video App (check local listings) to explore one of the most critical and eventful periods in American history. A detailed “Summer of Space” programming guide is below and available online.

SECRETS OF THE DEAD: GALILEO’S MOON

When it was published in 1610, Galileo’s Sidereus Nuncius (Starry Messenger) set in motion a scientific revolution. Using observations he made of both the Earth’s moon and Jupiter’s moons, Galileo proved Earth is not the center of the universe. Five hundred and fifty copies of the original treatise were originally printed and roughly 150 are known to exist today. When an original copy with Galileo’s signature and seemingly original watercolor paintings of the phases of the moon believed to be done by Galileo himself came on the market in 2005, Sidereus Nuncius caused a worldwide sensation 400 years after its creation, and again in 2012, when it was proved a fake.

Experience the thrilling era of the space race, from its earliest days to the 1969 moon landing. A fascinating mix of scientific innovation, political calculation, media spectacle and personal drama, the series brings the Space Age to vivid life.

ANTIQUES ROADSHOW: OUT OF THIS WORLD

Explore the universe of space-themed treasures, including NASA Space Program autographed photos, a 1737 celestial & terrestrial atlas, and a Star Trek treatment, script and letters. Have the values of these stellar finds skyrocketed in the market?

NOVA: BACK TO THE MOON

Fifty years after humans first set foot on the moon, new scientific discoveries are fueling excitement for a return to the lunar surface – this time, perhaps, to stay. Join the scientists and engineers working to make life on the moon a reality.

8 DAYS: TO THE MOON AND BACK

Discover how centuries of knowledge, experimentation and engineering helped our ancestors understand the mysteries of space. Expert contributors decode astronomical myths and uncover the science behind their origins.

The secrets of our solar system have captivated mankind for centuries. Whether gas giant or composed of rock and metal, each of these worlds has a unique past, and each of these stories allows us to better understand how Earth came to be.

Meet the pioneering Air Force scientists and pilots whose Project Manhigh, which collected data about the biological and technical factors required to support human activity in space, laid the groundwork for the U.S. space program.

Hear Apollo astronauts and engineers tells the inside story of how the first mission to the moon, Apollo 8, pioneered groundbreaking technologies that would pave the way to land a man on the moon and win the space race.

A YEAR IN SPACE

Follow astronaut Scott Kelly’s record-breaking 12-month mission on the International Space Station, from launch to landing, as NASA charts the effects of long-duration spaceflight by comparing him to his identical twin on Earth, astronaut Mark Kelly.

BEYOND A YEAR IN SPACE

Picking up where the first film left off – Scott Kelly’s last day in space and return to Earth – the final installment also introduces viewers to the next generation of astronauts training to leave Earth’s orbit and travel into deep space.

THE FARTHEST: VOYAGER IN SPACE

Launched in 1977, NASA’s epic Voyager missions revolutionized our understanding of Jupiter, Saturn, Uranus, Neptune, and their spectacular moons and rings. In 2012, Voyager 1 left our solar system and ushered humanity into the interstellar age.

NOVA: PLUTO AND BEYOND

Join the mission as the New Horizons spacecraft attempts to fly by NASA’s most distant target yet. Since it explored Pluto in 2015, New Horizons is zooming toward Ultima Thule, an object four billion miles from Earth.

SUMMER OF SPACE programs will stream following each broadcast and be available on all station-branded PBS platforms, including PBS.org and the PBS Video App, iOS, Android, Roku, Apple TV, Amazon Fire TV and Chromecast. PBS station members can view episodes via Passport (contact your local PBS station for details). SUMMER OF SPACE classroom-ready materials will also be available for educators and students on PBS LearningMedia.

As part of the SUMMER OF SPACE, PBS KIDS will roll out new space-themed content beginning in June, including educational resources for families and educators to use all summer long. On June 17, PBS KIDS will premiere READY JET GO!: ONE SMALL STEP, a one-hour special featuring astronomy and scientific exploration. The new movie from READY JET GO! will take young viewers on far-flung adventures, as Jet and his friends journey to the moon where they learn about Neil Armstrong and the Apollo 11 mission. The special will air on PBS stations and the PBS KIDS 24/7 channel, and stream on the free PBS KIDS Video app and pbskids.org.

The SUMMER OF SPACE interactive hub will be housed on PBS.org. Throughout the summer, viewers are invited to submit videos, photographs, audio recordings, or text entries about how they experienced the Apollo mission and/or about their interest in space exploration in general.

CHASING THE MOON will also be supported by a multi-platform digital experience, anchored by an immersive web site featuring original short form video, collaborations with leading digital publishers and additional forms of experimental storytelling that will expand upon the characters and stories presented in the documentary. In addition, AMERICAN EXPERIENCE will host several high-profile public screening events in the months leading up to the premiere and will partner with PBS member stations across the nation to create regional space-related content and host their own live preview events, further extending the reach of the film.

ABOUT PBS’ SUMMER OF SPACE

PBS brings viewers the universe with SUMMER OF SPACE, a multiplatform experience that includes six new science and history programs, all commemorating America’s journey into space. The celebration officially kicks off July 8 with a new space-themed ANTIQUES ROADSHOW “Out of This World” and the epic three-part special “Chasing the Moon” from AMERICAN EXPERIENCE, charting the worldwide race to space during the 1950s and ‘60s. NOVA special “Back to the Moon”(July 10) explores how new scientific discoveries are fueling excitement for a return to the lunar surface, and its five-part series “The Planets” (July 24) brings to life the dramatic story of our solar system—from Saturn’s 45,000-mile-wide rings, to Mars’ ancient waterfalls, to the raging winds of Neptune, and more. 8 DAYS: TO THE MOON AND BACK (July 17) tells the story of Apollo 11 with rare mission audio and CGI recreation of the crew experience, and in the three-part ANCIENT SKIES (July 24), audiences will discover the centuries of knowledge, experimentation and engineering that helped our ancestors explore outer space. Immersive and interactive space content will also stream concurrently on PBS.org, OTT and PBS apps. PBS Digital Studios will launch a new space-themed miniseries on Facebook, and rare imagery from NASA will be the focus of an Instagram Stories campaign.

PBS, with nearly 350 member stations, offers all Americans the opportunity to explore new ideas and new worlds through television and digital content. Each month, PBS reaches over 90 million people through television and 30 million people online, inviting them to experience the worlds of science, history, nature and public affairs; to hear diverse viewpoints; and to take front row seats to world-class drama and performances. PBS’ broad array of programs has been consistently honored by the industry’s most coveted award competitions. Teachers of children from pre-K through 12th grade turn to PBS for digital content and services that help bring classroom lessons to life. Decades of research confirms that PBS’ premier children’s media service, PBS KIDS, helps children build critical literacy, math and social-emotional skills, enabling them to find success in school and life. Delivered through member stations, PBS KIDS offers high-quality educational content on TV – including a 24/7 channel, online at pbskids.org, via an array of mobile apps and in communities across America. More information about PBS is available at www.pbs.org, one of the leading dot-org websites on the internet, or by following PBS on Twitter, Facebook or through our apps for mobile and connected devices. Specific program information and updates for press are available at pbs.org/pressroom or by following PBS Pressroom on Twitter.

EDITOR’S NOTE: For images and additional up-to-date information on this and other PBS programs, visit PBS PressRoom at pbs.org/pressroom.