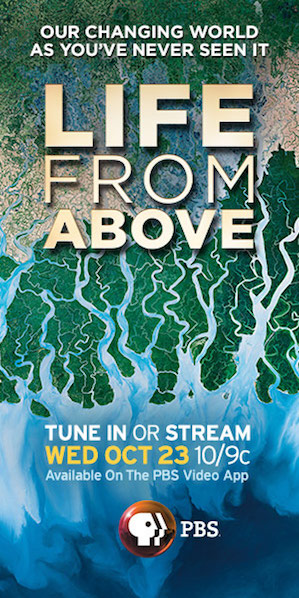 PBS, the preeminent destination for engaging, enlightening and entertaining science and natural history programming, will go beyond the horizon to reveal a new vision of our home planet in the new four-part series LIFE FROM ABOVE. Made in conjunction with BBC Studios’ Natural History Unit, LIFE FROM ABOVE, tells the unique, intimate and astounding stories of our planet from a perspective that few ever see – from space. This extraordinary viewpoint reveals amazing events happening every day in both the natural and human worlds. From the intimate to the epic, the surprising to the familiar, LIFE FROM ABOVE offers a rare look at Earth, its landscapes and its inhabitants that goes beyond what we thought we knew. LIFE FROM ABOVE premieres on Wednesday, October 23, 2019 at 10:00 p.m. ET on PBS (check local listings), PBS.org and the PBS Video App.

“Through our long-standing partnership with BBC Studios, we continue to bring our viewers to rare and remote places with cutting-edge and modern-day science and nature programs,” said Bill Margol, Senior Director, General Audience Programming & Development for PBS. “LIFE FROM ABOVE is an exciting journey exploring Earth’s vast frontier, including secluded sites and unexpected discoveries from the skies above.”

LIFE FROM ABOVE captures the planet’s unique movements, beautiful colors, exotic patterns and forces that continue to shape and change the Earth and is also accompanied by a companion hardcover book. With over 200 spectacular images, including astonishing satellite photographs and stills from the BBC Natural History Unit’s footage, Life From Above: Epic Stories of the Natural World by Michael Bright and Chloe Sarosh (Rodale Books, 2019) reveals Earth as it’s never been seen before.

“BBC Studios Natural History Unit has a worldwide reputation for innovation and LIFE FROM ABOVE breaks new ground yet again in the way we see the natural world,” said Jo Shinner, Executive Producer. “Our mantra from the get-go was to see what can satellite imaging add to the natural history genre that feels fresh, revelatory and from a new perspective. The result is like having an exclusive ring-side view on how the planet works and the secrets hidden in its remote corners.”

An overview of LIFE FROM ABOVE is as follows:

From space, Earth may appear still, but a look closer shows it is constantly on the move. In the first part of the series, “Moving Planet,” cameras explore the powerful forces that create this restless movement. From above, watch the atmosphere swirl as devastating hurricanes hit the Gulf Coast of the United States, while in Africa, the lives of a family of elephants are saved by the long-awaited arrival of the rains. The journey of water has created the greatest delta on Earth, the Sundarbans, where fishermen respond to the ebb and flow of the tides, while in the center of Africa, hippos have channeled the water’s flow to create a vast wetland.

It’s not only natural forces that are at work on our planet. Satellite cameras are so advanced that now the movement of animals and even people can also be seen from space. From above, satellites capture gray whales making their journey from Alaska to breed in the waters off California. Herds of wildebeest are caught crossing the Serengeti. In China, satellites spot the red shapes created by the synchronised display of thousands of Shaolin Kung-Fu students.

We think of Earth as a blue planet, but now satellites allow us to look closer, revealing a kaleidoscope. Part two of the series, “Colorful Planet,” explores the secrets of our home’s beautiful colors. Microscopic plankton transform the oceans with vast swirls of turquoise; only visible from above, these blooms support oceanic food chains. On land, seasonal blooms create incredible colors across the planet, from red chillies in the Gobi Desert to rainbow barcode fields of tulips in the Netherlands. In China, billions of rapeseed flowers turn the landscape bright yellow, followed by nomadic beekeepers who time their arrival with the blooms to harvest and sell honey.

Where there is color, there is life, but a loss of color can be a sign that the natural world is under threat. In Australia, the bleaching of the barrier reef is now so advanced, it can be seen from space. In Greenland, the white of the ice sheet is specked with blue as climate change melts the ice, creating huge pools of sapphire. Being able to spot color from above allows scientists to monitor the most remote places of the planet, and this has led to a surprising discovery. In Antarctica, brown patches are guano trails left by emperor penguin colonies. By looking for these patches, more colonies of emperor penguins have now been discovered.

Part three of the series, “Patterned Planet,” explores the mesmerizing array of shapes and patterns that cover Earth’s surface, each with its own unique story to tell. In Australia, reef halos are the work of feeding fish, and in the continent’s arid south, wombats have created their own network of burrows clearly visible from space. Satellite images also capture forest elephants mining for minerals in the earth, clearing a huge tear in the Congo’s forest canopy.

The impact of powerful natural forces on the planet can also be seen from space. For example, in Brazil, animals arrive as a sea of sand dunes is transformed by the rains. Cameras uncover u-shaped oxbow lakes that make the perfect safe place for rescued Amazonian manatees in need of rehabilitation. Animals and natural forces have been shaping the landscape for millennia, but recently, new, complex and ordered shapes crafted by humans have started to appear. Circles cover the Midwestern United States on a scale only appreciated from above. Satellites reveal small spaces in one of the many tightly packed irrigation crop circles where tiny bobwhite quail chicks have made a home. 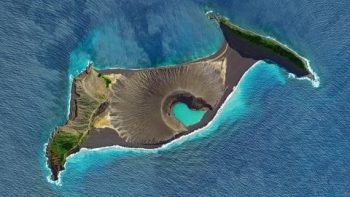 Earth is constantly in flux. The final part of the series, “Changing Planet,” reveals the powerful forces that are changing and shaping the planet’s landscapes. Ancient scars can be seen from above; the San Andreas Fault, Grand Canyon and Uluru have all been formed over thousands of years. The safest way to monitor one of the deadliest forces for change is from above. Volcanoes create new land in the South Pacific, but in South America, they put an endangered population of frogs on the brink of extinction.

Seasonal changes are also powerful enough to leave their mark. Wildfires rip across California, creating black scars hundreds of miles across. Satellites have now become the best way to track the fires, monitoring the speed and direction of the smoke plumes and guiding smoke jumpers into the heart of the blaze. Now, there is a new force for change that is radically altering the planet: humans. Using images taken over decades, we can watch as cities sprawl and great forests disappear, but we can also see where we are trying to restore the balance. In Tanzania, local people have been using satellite images to replant trees to ensure a bright future for a group of chimpanzees.

LIFE FROM ABOVE also begins streaming on October 23, 2019 on all station-branded PBS platforms, including PBS.org and the PBS Video App, available on iOS, Android, Roku, Apple TV, Amazon Fire TV and Chromecast. PBS station members will be able to view all episodes via Passport (contact your local PBS station for details). 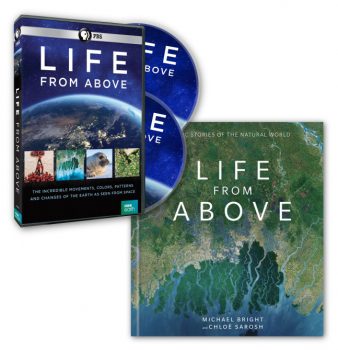 LIFE FROM ABOVE will also be available on Blu-ray and DVD from PBS Distribution at shop.PBS.org, on October 22, 2019.

LIFE FROM ABOVE is a BBC Studios Production for PBS, BBC and Tencent Penguin Pictures and a BBC partnership with the Open University. Commissioning Editor for the BBC is Craig Hunter; Bill Margol is Executive in Charge for PBS. The series is executive produced by Jo Shinner with Chloe Sarosh as Series Producer and Barny Revill as the Series Director.   Funding for LIFE FROM ABOVE is provided by the Anne Ray Foundation, a Margaret A. Cargill Philanthropy.

PBS, with more than 330 member stations, offers all Americans the opportunity to explore new ideas and new worlds through television and digital content. Each month, PBS reaches over 120 million people through television and 26 million people online, inviting them to experience the worlds of science, history, nature and public affairs; to hear diverse viewpoints; and to take front row seats to world-class drama and performances. PBS’ broad array of programs has been consistently honored by the industry’s most coveted award competitions. Teachers of children from pre-K through 12th grade turn to PBS for digital content and services that help bring classroom lessons to life. Decades of research confirms that PBS’ premier children’s media service, PBS KIDS, helps children build critical literacy, math and social-emotional skills, enabling them to find success in school and life. Delivered through member stations, PBS KIDS offers high-quality educational content on TV – including a 24/7 channel, online at pbskids.org, via an array of mobile apps and in communities across America. More information about PBS is available at www.pbs.org, one of the leading dot-org websites on the internet, or by following PBS on Twitter, Facebook or through our apps for mobile and connected devices. Specific program information and updates for press are available at pbs.org/pressroom or by following PBS Pressroom on Twitter.

BBC Studios Natural History Unit produces the world’s most iconic natural history programs, such as Blue Planet II and Planet Earth II, which have been watched by more than a billion people globally. Ranging from technically challenging live shows and super-landmarks to long-running series and children’s content, The Natural History Unit programs include Dynasties, Blue Planet Live, Springwatch, Animal Babies: First Year On Earth, Andy’s Dinosaur Adventures as well as the forthcoming Seven Worlds, One Planet presented by Sir David Attenborough and third-party commissions for Discovery, Apple, Quibi, National Geographic and BBC America. The Natural History Unit is part of BBC Studios, a subsidiary of the BBC, which develops, produces and distributes bold, British content, making over 2500 hours of content each year, operating in 22 markets globally and generating revenue of around £1.4bn. In the year to March 2019, it returned £243m to the BBC Group, complementing the BBC’s license fee and enhancing programs for UK audiences.

Crime Drama Actor Danny A. Abeckaser To Star in THE Crime Drama of the Summer – LANSKY