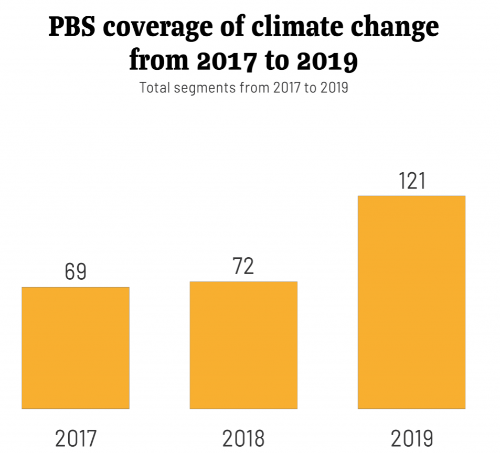 “In the 20 years since I first started talking about the impact of climate change on our world, conditions have changed far faster than I ever imagined,” said Sir David Attenborough in CLIMATE CHANGE – THE FACTS. “It may sound frightening, but the scientific evidence is that if we have not taken dramatic action within the next decade, we could face irreversible damage to the natural world and the collapse of our societies. We’re running out of time, but there is still hope.”

The program warns of potential tipping points that could trigger further catastrophic events, such as methane gas escaping from melting lakes in the arctic. While these scenarios are discouraging, the program also inspires individuals to take action and make a difference. Experts offer hope that changes can be made in the next decade to reduce CO2 emissions and limit further damage. These include increased advocacy, advances in alternative energy technologies and innovative solutions to capture existing carbon dioxide.

For more information on CLIMATE CHANGE – THE FACTS, visit https://www.pbs.org/show/climate-change-facts/. Viewers are also encouraged to engage in online conversation about the series by tagging @PBS and using #ClimateChangeFilmPBS on Facebook, Twitter and Instagram.

CLIMATE CHANGE – THE FACTS will be available to stream starting Wednesday, April 22 on all station-branded PBS platforms, including PBS.org and the PBS Video App, available on iOS, Android, Roku, Apple TV, Amazon Fire TV and Chromecast. PBS station members will be able to view the film via Passport (contact your local PBS station for details).

CLIMATE CHANGE – THE FACTS is a BBC Studios and IWC Media production for PBS. Bill Gardner is Executive in Charge for PBS and Tom McDonald is Commissioning Editor for BBC Studios. The program is executive produced by Sacha Baveystock, Andrew Cohen and Jonathan Renouf. Serena Davies is the series producer and director.

For the last 60 years, David Attenborough has been one of the world’s leading natural history filmmakers, making landmark series including Life on Earth, The Blue Planet and Planet Earth, seen by billions of people across the world. His extraordinary career has spanned black and white, color, HD and 3D formats and his films have won multiple Emmys and British Academy (BAFTA) awards. David was knighted by the Queen in 1985 and was given Britain’s highest honor, the Order of Merit. He has also received numerous other awards and is a fellow of the Royal Society. In Britain, David Attenborough is considered a national treasure and has recently been voted Britain’s most popular trusted person. David’s films continue to push the boundaries of camera technology and CGI in factual storytelling. His latest ambitious multimedia projects include both apps and virtual reality (VR) which both entertain and educate global audiences of all ages. David joined the BBC in 1952 and within several years created his acclaimed ZooQuest series – filming wild animals in their natural habitat for the very first time. By 1965, he was Controller of BBC Two and responsible for the introduction of color television into Britain. In 1973, he left BBC senior management to return to his passion of program-making. The internationally acclaimed, thirteen-part series Life On Earth was the most ambitious series that had ever been produced by the BBC’s Natural History Unit, and created the famous ‘landmark’ format that continues to make the Natural History Unit world renowned to this day. Throughout the 1990s, David presented natural history series to huge global audiences, including The Trials of Life (1990), The Private Life of Plants (1995), and The Life of Birds (1998). In autumn 2000, David presented State of The Planet and a year later The Blue Planet. In 2002, he presented the immensely popular Life of Mammals, followed by Life in the Undergrowth and Life in Cold Blood. In 2006, he narrated the much-celebrated blue-chip series, Planet Earth, followed by Life (2009) Frozen Planet (2011), Africa (2013) and Life Story (2014). In 2016, he made two award winning specials: Light On Earth and Attenborough’s Giant Dinosaur. Sir David has presented the four-time BAFTA and two time Emmy award-winning series Planet Earth II (2016) along with Emmy award winning series Blue Planet II, (2017) for which he won the award for Outstanding Narrator. He has since narrated Dynasties, (2018) and Seven Worlds, One Planet (2019).

PBS, with more than 330 member stations, offers all Americans the opportunity to explore new ideas and new worlds through television and digital content. Each month, PBS reaches over 120 million people through television and 26 million people online, inviting them to experience the worlds of science, history, nature and public affairs; to hear diverse viewpoints; and to take front row seats to world-class drama and performances. PBS’ broad array of programs has been consistently honored by the industry’s most coveted award competitions. Teachers of children from pre-K through 12th grade turn to PBS for digital content and services that help bring classroom lessons to life. Decades of research confirms that PBS’ premier children’s media service, PBS KIDS, helps children build critical literacy, math and social-emotional skills, enabling them to find success in school and life. Delivered through member stations, PBS KIDS offers high-quality educational content on TV – including a 24/7 channel, online at pbskids.org, via an array of mobile apps and in communities across America. More information about PBS is available at www.pbs.org, one of the leading dot-org websites on the internet, or by following PBS on Twitter, Facebook or through our apps for mobile and connected devices.