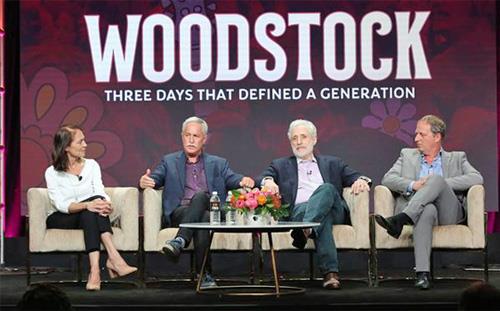 Beverly Hills, CA (The Hollywood Times) 8/4/19 – On August 6th PBS takes us back to three days that changed everything. In fact, it’s difficult for those who were around at the time, to see modern history as anything but “before Woodstock” and after.

“Woodstock: Three Days that Defined a Generation”,. Directed by Barak Goodman and written by Goodman and Don Kleszy, takes an in depth look at the decade leading up to those three days, through the experiences of people who were actually there.

A TCA panel in late July welcomed Joel Rosenman, coproducer, Joel Makower, author of “Woodstock: The Oral History”, and writer/director/producer Goodman. Their perspectives on the making of the film were a peek into what to expect.

“The story coming out of Woodstock during the festival was very different from what was actually taking place there,” said Makower to a packed TCA audience. “First of all, we did not have social media. Did not have cell phones. Did not have much, if any, communication. Outside, there was a–I don’t know how big of a bank of pay phones, but they were pretty much always used by those people who had to call home. And as one person told me, he said, ‘Yeah, those of us standing in line are the people he said, ‘We’re the people who have to call home.’ They sort of knew who they were.”

Makower said Woodstock wasn’t so much historical for what did happen, as it was for what didn’t happen. “So, that was the narrative, and it wasn’t until after when we realized that nothing bad really happened certainly relative to the scale of what could have happened,” he said. “And for me, the fact that Woodstock was not a disaster given all of the circumstances and ingredients that could have made it one was the big story of the day.”

Goodman added that the event was more than just an idea, or a concert. It was a seminal moment for an entire generation.

“I mean, it was never just a concert,” he said. “You talk to the veterans. Maybe there’s some people even in this room who were there. Almost to a person, they remember fondly the music, but it wasn’t really the music that they took away from that three and a half days. It was the experience of being with each other. It was the experience of overcoming the really the hardships that they faced, but the communal feeling among them, the recognition that they weren’t alone. You heard that over and over again. So for me as a filmmaker, for us as a series, the importance of this wasn’t the concert, wasn’t the music. It was the way in which it crystallized something real about the counterculture, which had been kind of vague and amorphous and somewhat mocked and caricatured, and has been since.”

For that generation, added Goodman, it was about what was important to them in that moment.  “Really, what happened at Woodstock underscored that there was a reality to it and that those virtues I mean, Joel says it wonderfully in the film, that the better angels of our nature, the sense of goodness in people really just needs an opportunity to come out. And in that case, in that three and a half days, among 500,000 young people, it really did come out. And for that reason, I think it will last for the beacon and inspiration not only of a certain era but a timeless beacon.”

That “timeless beacon” still stands as an iconic moment in American history. If the younger generations weren’t aware of it yet, Goodman’s film will make sure they get an accurate, realistic, and balanced view of it. And his full-bodied take is definitely one worth experiencing, no matter what generation you hail from.