Los Angeles, CA (The Hollywood Times) 2/19/22 – Last evening at the 2020 Arts & Archives venue on Beverly Boulevard in Los Angeles’ Historic FilipinoTown was a special screening of Payal Kapadia’s award-winning The Night of Knowing Nothing (India, 2021). The film, produced by Petit Chaos, recently won the prestigious Golden Eye and Documentary Prize at the 74th Cannes Film Festival. The screening at 2020 Arts & Archives was presented by Acropolis Cinema, an itinerant screening series bringing classic and contemporary experimental, international, and undistributed films to Los Angeles. Mumbai-based filmmaker Payal Kapadia uses the tenderness and vulnerability of the written word as the main filament of her latest film, A Night of Knowing Nothing. It is a fleeting glimpse into the world of its anonymous protagonist, L, while cataloguing her love letters to her beloved. “An essay film that mixes reality and fiction”, according to Kapadia, the film does what moving images don’t do very often – uncover the state of a nation. In this case, the idea of being young in contemporary India. 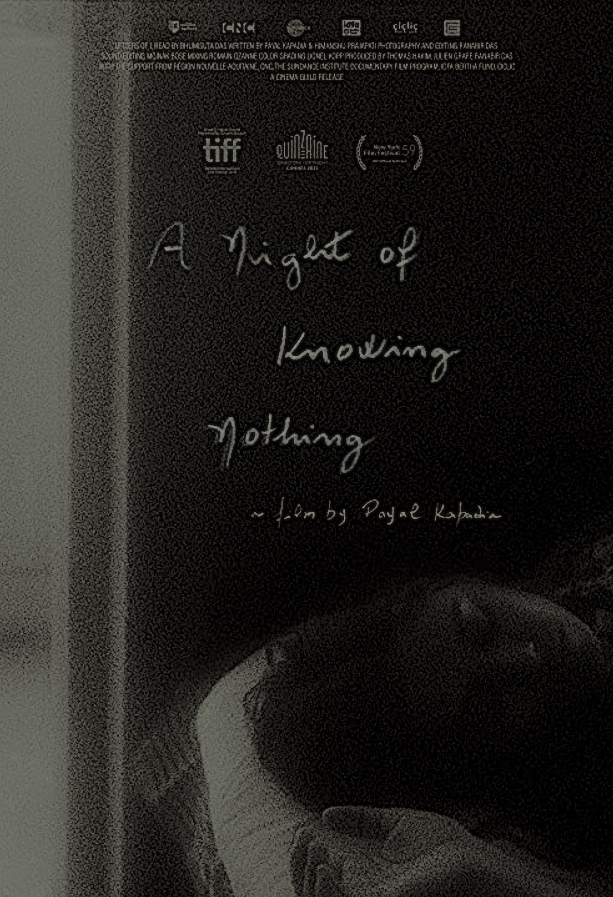 Kapadia has created a poetic compilation film, arranging appropriated footage and artefacts alongside original film to draw parallels between overlapping histories of resistance and accelerating state violence. But A Night of Knowing Nothing is not an expository historical documentary, and its non-linear approach maintains a challenging narrative structure. Kapadia employs a speculative, associational method of cinécriture, taking an essayistic approach where the film’s constituent parts are often elusive but nevertheless build towards a more unified whole. In an early shot from Payal Kapadia’s debut feature a projection of an unnamed film falls onto a group of young people dancing. The projected images are obscured as they refract over and through exuberant bodies in motion, towards a screen in the background. There is no music or diegetic sound. Instead, a voiceover reads from a series of love letters between two young film students, explained via intertitles as found in a box of reels and artefacts at the Film and Television Institute of India (FTII).

It isn’t clear whether this personal correspondence is fictional or historical, but it expands over found footage, drawings, and original film to create a vivid tapestry of student resistance during the right-wing Bharatiya Janata Party’s rise to power in the mid-2010s. The letters between two lovers – identified only as ‘L’ and ‘K’ – shape the film’s loose narrative. Initially sensual and dreamlike, the mood is soon punctured by a bold filmic exploration of contemporary India’s political rupture under Prime Minister Modi’s regime. The viewer learns that the casteism of K’s parents has impacted upon his love for L, and the impossible nature of their relationship is realized as the instability of India’s present moment unfolds on screen. Of course, the personal is political in this rigid hierarchy of oppression, and L’s focus soon turns outward to her circle of friends in their fight for creative and intellectual freedom, as the narration shifts tone from one of romantic longing to that of fear and rising dissent.

Kapadia places the love story in concomitance with the political matters of concern and contention. As it documents a relationship, the film archives contemporary realities of caste discrimination, communalism, subversion of freedom of speech and expression, censorship on political dissent, the use of nationalism to trample on constitutional loyalties, and right-wing nationalists holding sway – issues that have been significant to India and the world in the last decade. “We have started seeing politics as something separate from us, but that is not the case. A filmmaker’s political position shows clearly in her film. No one can shy away from that. Cinema is very transparent,” says Kapadia, 35, in an interview from Paris, after winning the award.

A graduate from Pune’s Film and Television Institute of India (FTII), Kapadia roped in Bhumisuta Das as the film’s narrator, a graduate from Delhi’s National School of Drama, whose voiceover takes one through the trials of L’s life. Kapadia was keen that the film should feel like a personal journal. Even as L, who is a student at FTII, talks of love, it’s not without the mention of caste since K’s parents won’t accept her, one from a lower caste. The shadowy realities of other incidents that affected campus life is where Kapadia trains her lens – be it of the Dalit scholar, of the University of Hyderabad, Rohith Vemula’s suicide in 2015, FTII protests in the same year, where the students refused to accept actor-turned-politician Gajendra Chauhan as their chairperson, the Jawaharlal Nehru University (JNU) protests next year or those at other universities around the country.

Kapadia also shows us the unseen and unheard in all of this. She uses silence through much of the film even when there is fervent activity on screen. There are students dancing, fiery speeches, police manhandling, yet through all of it her monochrome shots, many from FTII, are merged with other “found footage” to evoke a sense of melancholy.

The film title too, she says, was “found.” Kapadia’s partner and the film’s cinematographer and editor Ranabir Das had clicked a few photos at the FTII campus, when the two were students there. On one of these shoot nights, he came across a poem on a wall, titled “A Night of Knowing Nothing”. The poet was unknown. “The line really resonated with us,” says Kapadia. “There is also a vulnerability that this title evoked. The film could be perceived as one long unpredictable night, where we are in the dark about what will happen next,” says Kapadia.

Ranabir and Kapadia shot stray conversations in 2016-17, but there was no holistic vision until 2019. The two then got more footage from FTII campus from filmmakers and friends Prateek Vats and Shubham apart from archival material from various sources and decided to bind these seemingly disconnected images through the letters. The two were inspired by filmmakers such as Chris Marker in Sans Soleil (1983) and Miguel Gomes in Redemption (2013), who use these hybrid formats in non-fiction. “The letters are fictional. We didn’t approach the film as a documentary nor as fiction but we used tools from reality and sometimes made-up narratives to speak about our personal truth” says Kapadia, who adds that it is very liberating to free oneself from the confines of these definitions of documentary and fiction.

In 2015, months before Kapadia began to shoot A Night of Knowing Nothing, she was at the forefront of the infamous four-month protests at the FTII campus that were held against the appointment of Chauhan as the new chairperson of the institute. On August 5, 2015, the 68th day of the protest, while the students abandoned classes and made rousing speeches, Prashant Pathrabe, the then director of FTII issued a notice to the 2008 batch to vacate the hostel on the grounds of overstaying. An order of assessment of their film projects, which were mostly incomplete, was passed. Calling it “irrational and unjustified,” the students went to his office seeking answers. The students held Pathrabe captive and formed a human chain around the office. This was followed by a midnight crackdown by the police where five students were arrested. About 35 students were later named in the charge sheet. Kapadia was one of the 35 students. She was charged with disciplinary action, lost her scholarship and the opportunity to participate in the foreign exchange program, alongside seven other students.

Filmmaker Vikas Urs, Kapadia’s classmate at FTII, who was one of the five students arrested during the midnight crackdown, recalls those tough months. “It was a big ego issue for them (the government) and they came down on all of us heavily,” says Urs, “Everything that we anticipated then, has come true. Like a lot of us, and for Payal too, the film is the catharsis we all wanted. Her film is a double-edged sword because the institute uses it for branding, despite all they did to us. But you can’t stop the march of time,” says Urs, who adds that a lot of the students were shooting the protests at the time.

It’s at FTII that she met Ranabir. It was an age, he says, when they’d see families object to other castes or religions. Kapadia chose to use the device of a love story to tell of her love for India, with its many complications and layers. “Love is also political, no? Especially in our country, where falling in love comes with a great deal of social complications, which even lead to violence,” says Kapadia.

And thus, at the heart of the film is this turmoil and an intense sense of yearning – to be free, to be able to have the basic fundamental rights. “How do you create cinema otherwise,” says Urs. The concept of longing is something that Kapadia has always been fascinated by. “I don’t see it as just a yearning for a person but as a state of being. Maybe this yearning also can be translated to the desire for a certain kind of future or society that one sees as an ideal,” she says.