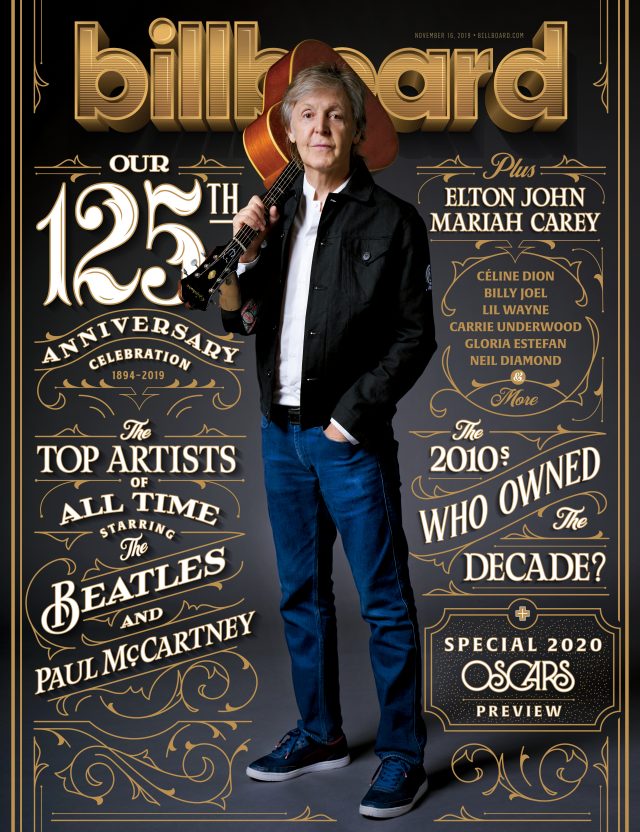 The very special COVER features Paul McCartney, where he sat down with Billboard to talk openly about The Beatles, his business and what’s next. Full article HERE and some highlights below.

And on the occasion of Billboard’s 125th anniversary, the charts team created an equally monumental ranking: BILLBOARD’S TOP 125 ARTISTS OF ALL TIME. Using a formula blending all titles tallied on both the Billboard Hot 100 songs chart (since its inception on Aug. 4, 1958) and the Billboard 200 albums chart (since it became a combined stereo/mono survey on Aug. 17, 1963), we assembled a list of music’s all-time top artists:

The rest of the elite top 10 on the Top 125 Artists of All Time ranking features acts that launched their legacies, and made their first chart appearances, in the ’60s and one who arrived, and has since dominated surveys, in the 2000s: Barbra Streisand (No. 6), Michael Jackson (No. 7), Taylor Swift (No. 8), Stevie Wonder (No. 9) and Chicago (No. 10).

Full article HERE for a complete look at Billboard‘s Top 125 Artists of All Time chart. Additional chart stories include:

Some additional highlights from the 1:1 interviews with ELTON JOHN and MARIAH CAREY include: