Los Angeles, CA (The Hollywood Times) 2/18/22 – Thursday night at the newly-opened Motion Picture Academy Museum in Los Angeles was the special event – a screening of a 4K restored print of Accattone (Italy, 1961), the first film by Italian auteur Pier Paolo Pasolini. The evening co-sponsored by the Motion Picture Academy Museum and Cinecitta is celebrating the 100th anniversary of the birth of Pier Paolo Pasolini and his huge contribution to the cinema of Italy and the world. With words promised by film program Senior Director Bernardo Rondeau and Italian Consul General Silvia Chiave, the evening program includes a special guest, Production Designer Dante Ferretti, who worked with Pasolini on the majority of his films, beginning with Oedipus Rex (1967) and Medea (1969) as well as Fellini’s Satyricon (1969) and later 10 films of Martin Scorsese and 4 by Anthony Minghella. Dante Ferretti, who is 80, provided a lengthy review of how he began working with Pasolini as a production designer at a very young age – peppered with some amusing insights and anecdotes. The screening of Pasolini’s 2-hour-long Accattone followed afterward for the crowd of almost 400 film goers.

Accattone (1961) was the directorial debut of Pier Paolo Pasolini and has been called the last film of the Italian neorealism movement. Stylistically, it fits the part. Pasolini, already established as a poet and novelist before he began penning screenplays, brings something extra to this realist depiction of a lower-class world full of thievery and pimping. An expert in the dialect of Rome and its denizens, Pasolini has previously contributed to the screenplays of Fellini’s Nights of Cabiria (1957) and La Dolce Vita (1960). Within the bawdy, deprecating dialogue of the working-class characters are hints of allegory and poetry, flourishes of something more lyrical than these characters would otherwise manage. Yet, the writing always feels genuine as they leave the characters’ lips.

Accattone (Franco Citti), the “beggar” (or “deadbeat,” depending on the translation) is a pimp and a smooth-talking manipulator. But Pasolini presents him as a Christ-figure, with religious language and iconography weaving its way into the structure of his character. Yet Accattone is cruel and prideful. His introduction shows him boasting over the celebration that his funeral will be and how he wishes to be buried with his gold (the little he has) like a pharaoh. When one of his prostitutes breaks her leg, he accosts her and forces her out on the street all the same. This results in her being subjected to further cruelty by men who Accattone spited in his pride. She later goes on to tacitly defend him in front of the authorities.

This criminality is painted as a lower working-class struggle. Accattone and his friends joke about the little Accattone has, and he gets drunk off wine and starts on about the strife of his work. In one scene, he travels to a farm and talks with those working there about getting by on long hours of labor and the little they have to eat. The complicated nature of this relationship is the crux of Pasolini’s neorealist meditation. We follow Accattone with the stylistic equivalent to the father-son duo in Bicycle Thieves (1948). And yet, Accattone does not immediately garner the same sympathies as de Sica’s characters.

How do we grapple with the depiction Pasolini gives us? In a scene in which he fights a man, glorious music plays over the top as Accattone walks away, his head down as his opponent shouts “Pimp” at him. We are intended to feel sympathy for Accattone, despite the fact that his opponent is correct in his stance.

Accattone later attempts to trick his friends out of a free meal (none of the characters have eaten in over a day), which he later dubs a “last supper.” Pasolini is blurring the lines of the sacred and the human, evoking a conceptualization of religion in which even the immoral incarnations of humanity are created in the image of God. In a way, Pasolini is imploring his audience to view his characters as Christ would: with an unconditional love for their very existence, their moral choices notwithstanding.

The existential bent of the film is one that leans into social commentary without committing to any explicit comment. It is more so commenting on the fringe life of the working class. The camera chooses to focus on the figures contained within, taking time on multiple occasions to pan across the stern faces of average Joes lounging around a table or, in one instance, standing in a police lineup.

This focus on working class males does detract from the larger picture of this borgate life, in that it paints a narrow portrait of the female experience. Women are prostitutes or, in the case of the seemingly naive Stella, bound to become one. “Oh Stella, you are trapped,” the prostitute Amore woes, after telling Stella that she needs a man to find fulfillment. 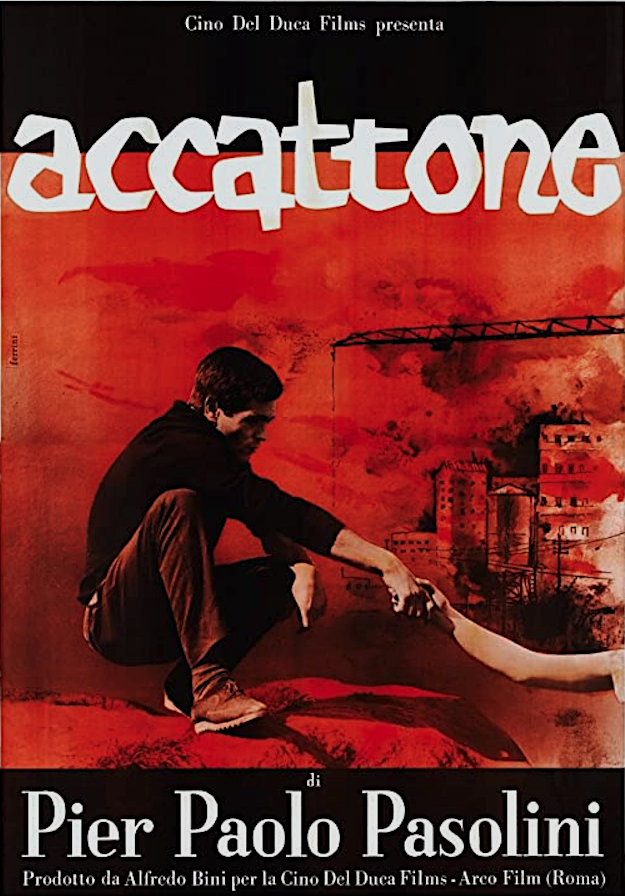 There is nothing simplistic about Accattone, and the misogyny of its characters is no exception. If anything, it acts to further complicate the moral and religious progression of its title character. Following the aforementioned scene, Accattone insults Stella for disrespecting his pride by sleeping with another man (itself a hypocrisy given his intent for her). In this argument, Accattone begins by saying he does not want people to drink his blood, sarcastically calling upon religious imagery to plead the case that his poverty should come with other’s sympathies. This scene ends with him calling on Madonna to make him a saint. The glib sarcasm by which he accepts his state signals his existential conflict. The film fates him to the lowly dregs that ultimately.

The transgressive relationship between Accattone and Stella is necessary to create this religious ambiguity and, ultimately, a moral transformation, but a feminist lens still makes the film a hard nut to crack. If Accattone is a Christ figure, albeit one devoted to the immoral, one of his prostitutes (and the mother of his children) acts as his Judas when she turns on him and goes to the police. Either way, the ambiguity is part and parcel with what Italian neorealism is all about. Accattone is fated for failure, and the film’s only goal is meander around this final demise in order to show the struggle. The narrative is not so much a journey as it is the desire for a journey that isn’t there. Accattone’s outbursts are vain attempts at instigating some sort of change, although no action is actually taken on his part until the end. This, of course, is merely another futile effort.