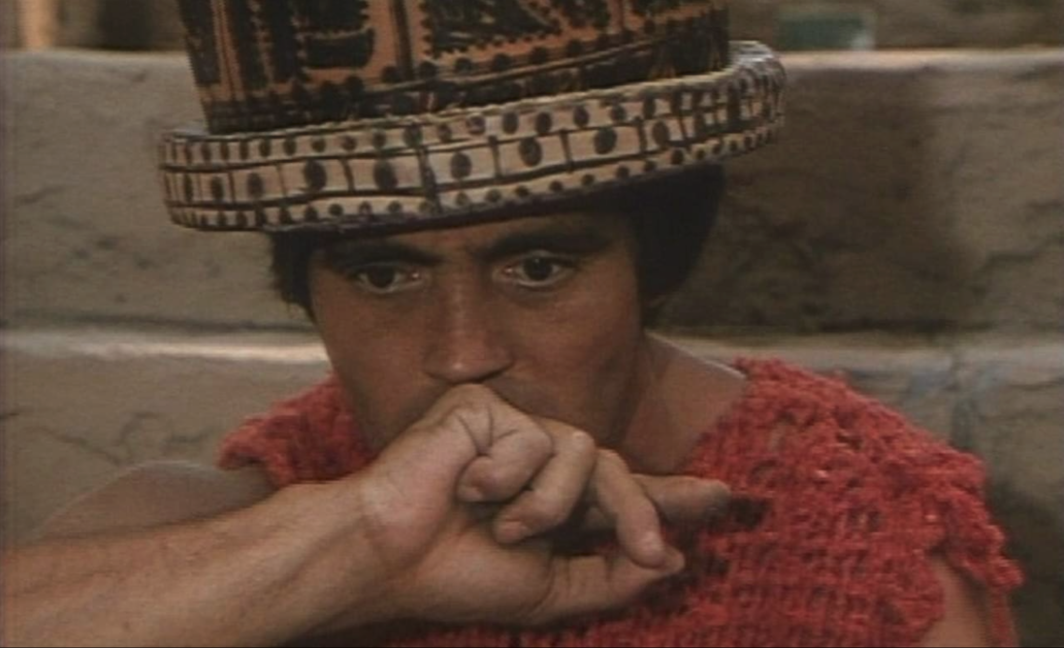 Los Angeles, CA (The Hollywood Times) 2/26/22 – Screening at the new Academy Museum theatres on Friday night was Pier Paolo Pasolini’s Oedipus Rex (Edipo Re, Italy, 1967) as part of the current retrospective of the films of Pasolini co-sponsored by the Motion Picture Academy Museum and Cinecittà. In many ways, Pasolini’s Edipo Re is a masterpiece based on the original text of the ancient Greek tragedy by Sophocles. The film was screened in a beautifully restored 4K print done by Cinecittà in honor of the 100th Anniversary of Pasolini’s birth. Shot mostly in Morocco in remote ancient villages with their distinctive abode buildings, Pasolini’s film is haunting in its imagery and visceral tension. L 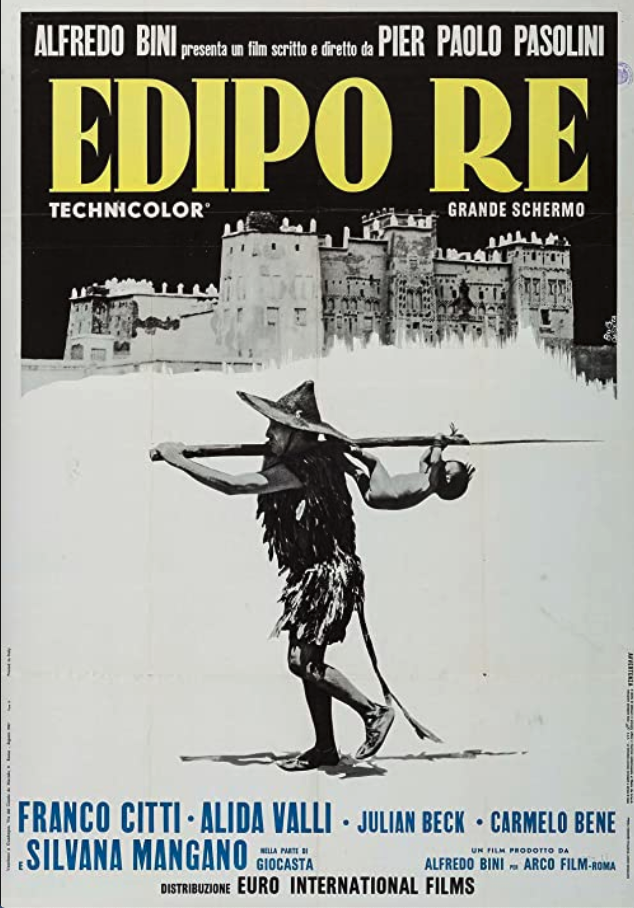 The film opens in Bologna in pre-World War II Italy. A son is born to a young couple in Italy. His father Laius (Luciano Bartoli) is a military officer in Mussolini’s army, The child opens his eyes for the first time to see his loving mother Jocasta (Silviana Mangano) and suckles on her breast. The father is motivated by jealousy, and believes the child will take away the love of his wife and send him into a psychological limbo. The officer arranges for a servant to take the baby into the desert to be abandoned. There not being real deserts in Italy, the film’s setting changes to the ancient world of Greece (which Pasolini chose to use remote villages in Morocco as the locations). The child is rescued by an old shepherd and taken to the King of Corinth Polybus (Ahmed Belhachmi) and Queen Merope of Corinth (Alida Valli) and raised as their own son because they are infertile. The child is given the name “Oedipus” because of his swollen feet.

Oedipus (Franco Citti) grows up believing that he is the biological son of Polybus and Merope. One day while cheating at a sports game an angry classmate calls him a “foundling” which enrages him. This torments and confuses him on the inside and plagues him with bad dreams and a feeling of ill omen. He asks his parents to visit the frightening Oracle of in order to find out the opinions of the god Apollo. He travels to the Oracle alone. The Oracle tells him that his fate is to kill his father and make love to his mother. She laughs at him and tells him to be gone and to not curse people with his presence. Oedipus runs away from the Oracle in anger.

Oedipus decides he can’t return to Corinth and wanders aimlessly in the desert. As he is walking down the sacred road of Apollo he is stopped by a wagon and some armed soldiers. The king named Laius who is riding on the wagon orders Oedipus to leave and treats him as a beggar. Oedipus hurls a huge stone breaking the legs of one of the soldiers. He runs off to the desert where he faces each soldier one by one and kills them before returning to the wagon where he kills King Laius and the wounded soldier. One of the king’s escorts runs off to the desert to avoid being killed and survives. 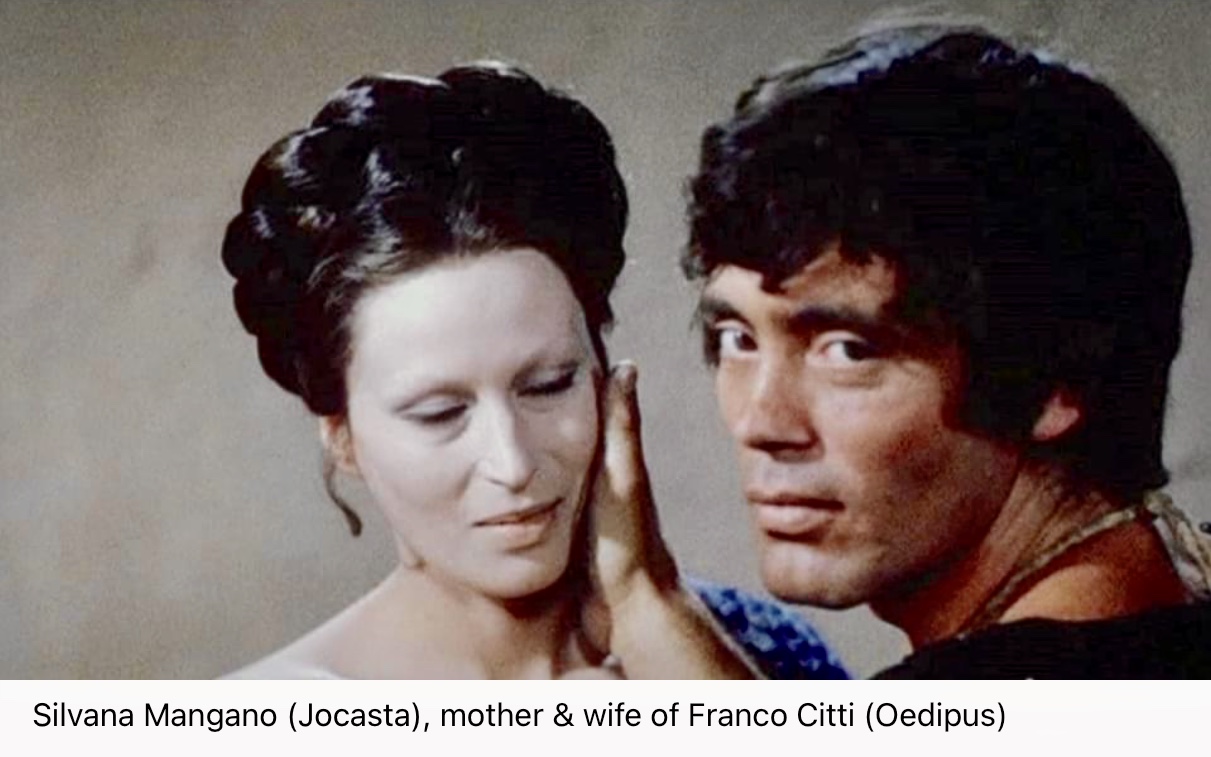 Oedipus continues down the road where he comes across roving bands of displaced people fleeing the Sphinx. The Sphinx has terrorized the country of Thebes. It has caused so much death that Queen Jocasta has promised to marry anyone who can kill it. Oedipus solves the riddle of the Sphinx. He casts the sphinx down into the abyss while the sphinx warns him of the abyss that is within him. Oedipus is given his reward and is married to Queen Jocasta who is unbeknownst to him, his biological mother. After Oedipus is made king, a plague occurs and kills much of the city. Oedipus sends his brother-in-law Creon to the Oracle to receive news about how to stop it. Creon returns and tells him that for the plague to end, King Laius’ killer must be brought to justice.

Oedipus sends for the blind prophet Tiresias (Julian Beck) to find out the name of the killer. Tiresias is reluctant to speak because he knows it will cause injury to both himself and Oedipus. Oedipus prods him to continue and Tiresias tells him that Oedipus is the killer. Oedipus banishes him from the city believing that his brother-in-law Creon put him up to it in order to steal the throne. Jocasta (Silviana Mangano) reveals to Oedipus that Laius was killed at the crossroads of Apollo’s sacred road. She also tells him that the Oracle has been wrong before. The Oracle predicted Jocasta’s son would kill his father so she sent for him to be killed in the desert.

Oedipus realizes with horror that the Oracle’s prophecy has been fulfilled and that Jocasta and Laius were his birth parents. The old servant who brought Oedipus to the desert is called for and admits to him the truth. Jocasta commits suicide by hanging and Oedipus blinds himself. The scene then changes again to modern Italy where Oedipus and Angelo (Ninetto Davoli) roam from town to town playing the flute. Oedipus returns to the meadow where he first opened his eyes as a child and finds peace.

Given Pier Paolo Pasolini’s proclivities towards sex, violence, politics, and spirituality, it comes as little surprise that he would find the Oedipus myth so riveting. The story is essentially the same in Pasolini’s film as the legend tells us, with some important changes to the character of Oedipus. Rather than make any decisions logically and intelligently, this Oedipus (Franco Citti, perhaps most widely known as one of Michael Corleone’s bodyguards in the Sicilian sequence of The Godfather) is a raging animal. In the original myth, when Oedipus unknowingly confronts his birth father on the road, their battle stems from an argument over who had the right to travel onward first. In this version, Oedipus simply hurls a rock at one of the guards, instigating a really wild brawl. 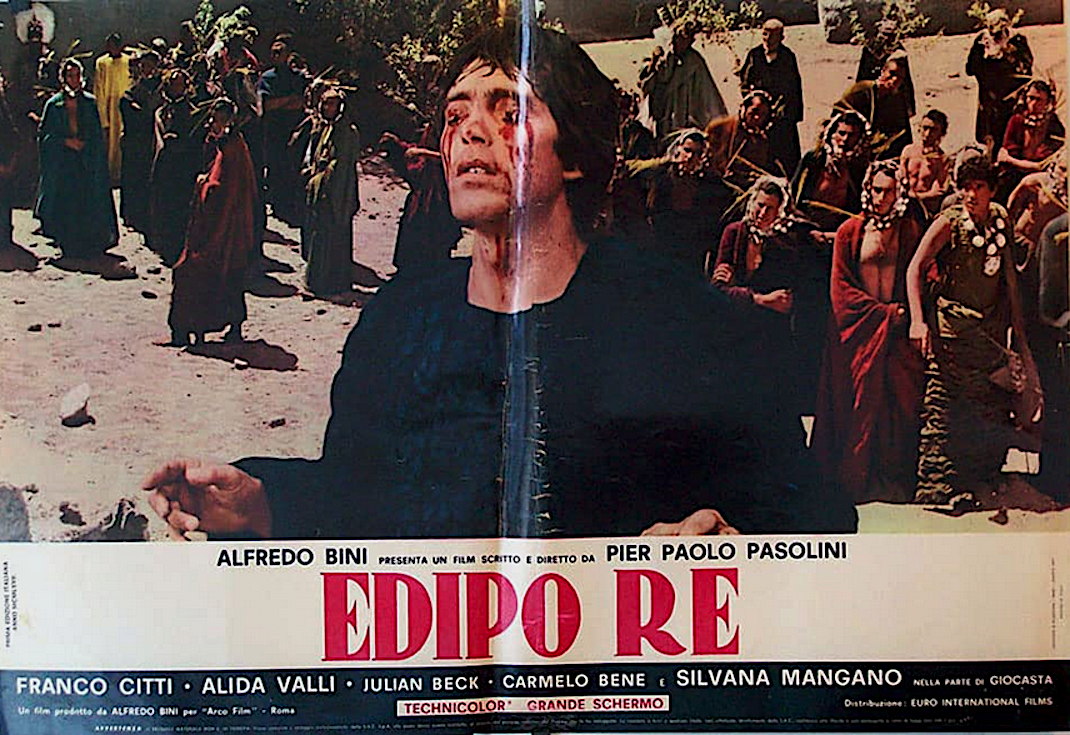 This speaks to a larger attempt to remove the intellectual overtones of the Oedipus myth, which has long been best associated with the complex Sigmund Freud associated with it. The problem, of course, is that in the myth, Oedipus didn’t consciously kill his father nor fall in love with his mother, and in fact the realization of this causes no small amount of horror within him. While Oedipus was traditionally an intellectual character (here he bludgeons the Sphinx, rather than answer a riddle), the intellectual angle that was later ascribed was never truly part of the original myth. By stripping Oedipus down to almost an animal,

It should also be mentioned that the film is gorgeously rendered in Technicolor. Pasolini felt that the prologue to the film, which is completely free from dialogue (indeed, much of the film plays out without words, even utilizing intertitles to show thoughts rather than have characters express them), was the best work he had ever done up to that point. The rest of the film plays along similar lines, keeping things as spare as possible, letting the characters’ actions speak for them. This not only makes for terribly compelling cinema, but it becomes important later when their words so often contradict what they do. Since we’ve come to know these people through their behavior, we instantly see right through their words.