Los Angeles, CA (The Hollywood Times) 3/4/22 – On Thursday, March 3, at the Motion Picture Academy Museum in Los Angeles was a screening of a new 4K restored print of Pier Paolo Pasolini’s Medea (Italy, 1969), part of a month-long retrospective of the films of Pasolini co-sponsored by the Academy Museum with Cinecittà.  Medea, which starred opera singer Maria Callas, is based on the ancient myth of the sorceress Medea and her relationship with Jason of Argonaut fame. A companion piece to his Oedipus Rex (1967) and far removed from his realistic early movies, Pier Paolo Pasolini’s Medea draws on Euripides’s play after first relating the story of Jason and the Argonauts’ voyage to steal the Golden Fleece from primitive Colchis and bringing it back to Greece along with the king’s daughter Medea. The second part concerns her terrible revenge when Jason deserts her and their children.

Pasolini’s willfully complex film, which some find baffling and infuriating, is a Freudian-Marxist-Christian take on the myth, buttressed by Pasolini’s cranky ideas about capitalism and mysticism versus modernity. Shot on locations as different as the beautiful Campo at Pisa, the Citadel in Aleppo, and the Göreme region of Turkey, it’s visually astonishing. At its center is Maria Callas in her only film role, a commanding presence with her large brown eyes. Jason is played by the Italian Olympic triple jumper Giuseppe Gentile.

Pasolini attempts an imaginative recreation of the premodern world from which the mythical sorceress Medea emerged. Though he does so with a meticulous, nearly anthropological attention to its often gory, hypothetical practicalities, he presents a way of life in which the very notion of the natural hasn’t yet developed. Ambient and immanent metaphysics inform habits and manners that are, by our lights, anything but ordinary; these ecstatic wonders may be a menace to the settled ways of our own rational contemporaries, but they’re still given sublime voice in the opera, nowhere more than in the reckless thrills provided by Callas herself. 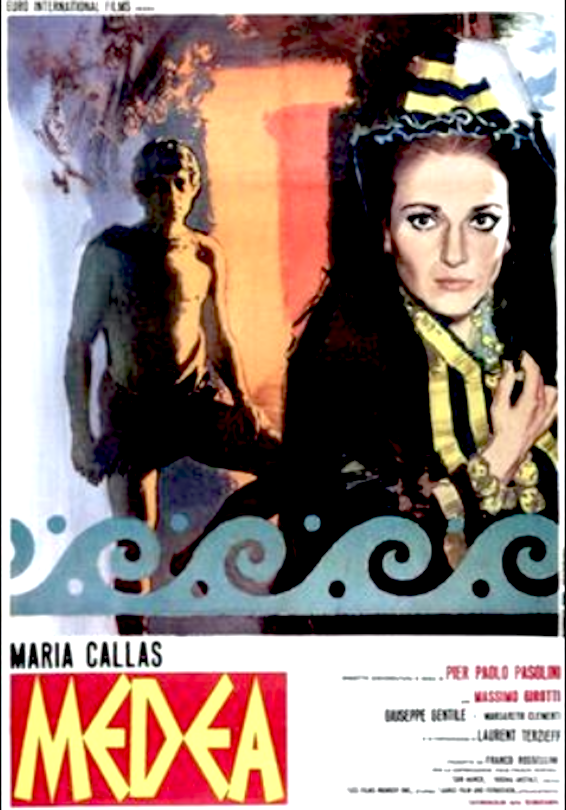 It’s worth stressing the position of Medea in Pasolini’s work, since it makes much the most sense when seen in context: it followed Pigsty (whose twin-level structure it duplicates, this time within a single narrative), and preceded the much-abused trilogy (whose rumbustious humor and sexuality were apparently a reaction against the outright nihilism evident here). That said, the film stands as Pasolini’s most bizarre exploration of Freudian themes through Marxist eyes: A retelling of Medea’s story (elopement, marriage, desertion, revenge) as a mixture of social anthropology and ritual theatre, with every incident given both a “magic” and a “rational” reading.

The film’s splendor crystallizes in the casting of Callas as Medea, a virtual mime performance with her extraordinary mask of a face bespeaking extremes of emotion; its weaknesses, equally, in the casting of Gentile as Jason, blandly butch, whose presence does nothing to fill out an ill-sketched, passive role. But the real achievement is that Pasolini’s visual discourse is every bit as eloquent as the verbal one he puts in the mouth of the centaur (Laurent Terzieff). In some ways, the film is a love song to Maria Callas, but the dark ending of the film almost seems like a resignation from cultural production. Indeed, Pasolini’s dramatic and adverse personality is very much alive in this film which depicts Medea’s murder of her husband, children and her husband’s lover.

In the prologue of the film, the centaur Chiron teaches the young boy Jason philosophical truths about the world and tells him about the voyage he will one day embark on to Colchis. Medea and the land of Colchis are also depicted and the first female voices we hear are those of the toiling women in the fields of Colchis (actually, Cappadocia). Colchis houses the Golden Fleece and is home to many bizarre rituals. A human sacrifice is performed in front of hundreds of cheering onlookers. A young man is offered up as a human sacrifice and his organs and blood are sprinkled over the crops in a ritual sparagmos. It is presided over by Queen Medea, who is a powerful sorceress with a direct connection to the gods of the land, water, and sky.

In the film, Jason grows up quickly under the watchful eye of the centaur and travels to Iolcus where he challenges Pelias to the throne. Pelias says he can have the kingdom if he retrieves for him the Golden Fleece from Colchis on the other side of the world. Jason agrees. Meanwhile Medea has a vision of Jason at the temple of the Golden Fleece and is so enraptured with him that she asks her brother Absyrtus (Sergio Tramanti) to help steal the fleece in preparation for his arrival.

They travel far into the wilderness where they eventually join the Argonauts who have been marching to Colchis. The King and the Colchians realize that the fleece has been stolen from under them. They pursue Medea and intend to retrieve the fleece. Medea realizes that the Colchians are chasing them and so she kills her brother and dismembers his body so that they are forced to stop and collect his remains. Her father’s men then halt and retrieve the scattered pieces of his son’s body, enabling Jason and Medea to escape. After collecting the pieces of his dead son, the King returns to Colchis where he has a burial ceremony performed for his son to soothe his crying wife. Meanwhile, Medea returns with the Argonauts to Greece where she has a spiritual crisis after realizing how completely alien Greek practices are from the rituals of her eastern homeland.

When they return to Iolcus, they deliver the fleece to Pelias who reneges on his promise. Deciding the fleece has little power after all, Jason accepts this decision. Medea is stripped of her ornate ethnic garb and dressed in the garments of a traditional Greek housewife. Jason dismisses the Argonauts and after spending the night making love to Medea, he decides to head for the city of Corinth. In Corinth, Jason sees a vision of two centaurs – Chiron, the centaur who raised him and one “newer” human version of Chiron. Only the newer human Chiron is permitted to speak as the older one’s dialogue would be incomprehensible to Jason. Chiron has a philosophical dialogue with Jason and tells him that Medea is torn between her past ritualistic self, the self that performed the human rituals in Colchis and the new less spiritual Greek self.

Medea bears Jason two sons though Jason grows more and more distant from her. He grows tired of Medea and decides to pursue a political marriage to a Corinthian princess, Glauce (Margareth Clémenti). Creusa’s father Creon (Massimo Girotti) is afraid of Medea’s wrath and particularly her dark magic. He decided to exile her from his land because he is afraid for his daughter who is not to blame for Jason’s fickle heart.

The enraged Medea plots revenge against Jason and his new bride. She is driven by the words of Creon and of her own handmaidens who view her a dark sorceress. She calls for Jason and pretends to be happy and accepting of his new marriage. She tells Jason that her one wish is that the King does not banish her two loving children which she has borne to Jason. Jason accepts and goes to Creon to ask that of him. Meanwhile Medea asks her children to send Glauce a robe bewitched with magic herbs. Although Medea intends for the poison to cause the princess and her father, Creon, to burst into flames; instead Glauce sees a reflection of Medea in her mirror and feels all the pain and turmoil within her. She rushes to the walls of the city where she commits suicide by plunging over the side to her death. The king rushes after her and is so moved to grief that he commits suicide as well.

Medea is driven into a frenzy and kills her and Jason’s sons and sets fire to their house. Held back by the fire, Jason pleads with Medea to let the children have a proper burial. From the midst of the flames, she refuses: “It is useless! Nothing is possible anymore!” Pasolini has taken great liberties with the original myth of Medea and also with the Greek play by Euripides. The film has a twofold narrative structure where so many events occur as double – in the double gift-giving sequence of Medea with a wedding gown, Glauce’s twice-occurring death, and the two-part homicide of Medea’s children. These depictions of thematic duplicity seem to confuse many viewers, but we need to remember that some things are staged in Medea’s mind as the older “magic” of her sorcery and the newer psychological way of understanding Medea’s behaviors. She remains a barbarian priestess from a distant culture with a very different kind of “vision” of reality.