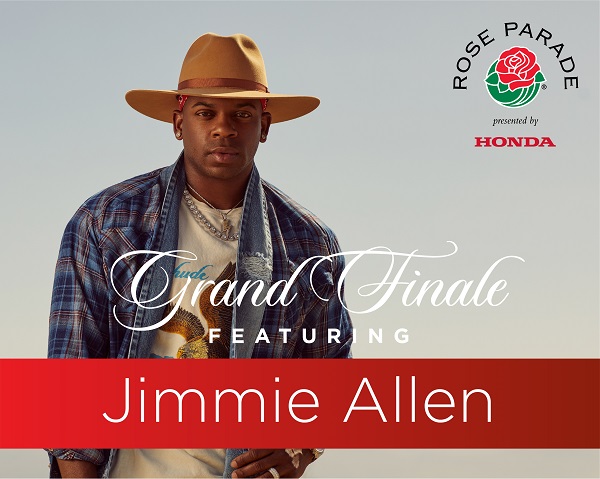 PASADENA, Ca. (Dec. 17, 2021) – The Pasadena Tournament of Roses® today announces the highly anticipated Grand Finale of its 133rd Rose Parade® presented by Honda on Saturday, January 1, 2022. As the two-hour mark approaches and the final float begins its trip down Colorado Blvd., four members of the Golden Knights – the United States Army Parachute team – will drop out of the sky and onto the street to do a live football toss from the Parade route to the Rose Bowl Stadium. Their descent will be accompanied by Timothy Fletcher, the drummer who has been making waves on Instagram and Tiktok with magical beats.

Traveling from Nashville, Tennessee to Pasadena, California and into the hearts of millions, Allen made history as the first Black artist to launch a career with two consecutive No. 1 hits off his 2018 debut album, Mercury Lane. His 2x platinum debut single “Best Shot” claimed the number one spot on Country radio for three weeks. Allen is nominated for Best New Artist at the 64th Annual Grammy® Awards in 2022, has been hailed by GRAMMY.com as one of “5 Black Artists Rewriting Country Music” and has amassed more than 1 billion on-demand streams.

For millions of viewers around the world, the Rose Parade is an iconic New Year’s Day tradition. Join us on Saturday, January 1, 2022, to experience the floats, bands and equestrians as they parade down Colorado Blvd.

The Tournament of Roses is a volunteer organization that hosts America’s New Year Celebration® with the Rose Parade® presented by Honda, the Rose Bowl Game® and a variety of accompanying events. The Association’s 935 volunteer members supply more than 80,000 hours of human power, which will drive the success of the 133rd Rose Parade, themed “Dream. Believe. Achieve.,” on Saturday, January 1, 2022, followed by the 108th Rose Bowl Game.  For more information, visit www.tournamentofroses.com. Like us on Facebook and follow us on Twitter, Instagram and YouTube.