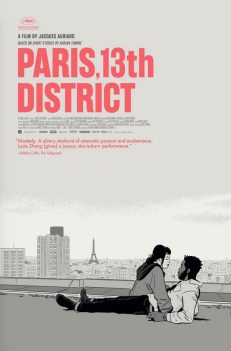 Los Angeles, CA (The Hollywood Times) 4/23/22 – Screening at several Laemmle theatres in Los Angeles is Jacques Audiard’s Paris, 13 District (France, 2021), is a film about ambiguity and instability in matters of love. The main characters in Audiard’s film do not seem all that interested in monogamy. In Paris, 13th District, then, the comings and goings of desire are dictated by pleasures in the present, not fantasies of a future of marriage and emotional exclusivity. Here, sexual-emotional connection springs from nowhere and quickly morphs into something unwieldy, and without all-or-nothing traumatic repercussions. Lovers try to learn from love’s failures instead of disavowing it for its inability to operate seamlessly. The film concerns a roundelay of romantic connections in Paris’s 13th arrondissement, a Left-Bank district of the city that is largely populated by Chinese, Vietnamese, and Cambodian people.

The movie is based on stories by the American graphic novelist Adrian Tomine, and the screenplay is not only by Audiard but also by Céline Sciamma (Portrait of a Lady on Fire and Petite Maman) and Léa Mysius (a sometime collaborator of Arnaud Desplechin). Despite this pedigree, and a nicely nonchalant parting note, the stories don’t culminate in anything particularly new. But for Audiard, who has always made rather mainstream films, Paris, 13th District is an interesting departure from his usual work.

Émilie (Lucie Zhang) posts an advertisement looking for a female roommate in her apartment in the Les Olympiades complex in the 13th District. The apartment was actually that of her Chinese grandmother who is now in a senior care home. So, when Camille (Makita Samba) shows up to look at the apartment, she tries to send him away because he’s a man. It doesn’t take long for Camille to change Émilie’s mind, as they bond over their shared quirks and erudition. He’s a teacher who reads Rousseau’s Confessions late at night for fun whenever he isn’t preparing his PhD thesis, while Émilie is a graduate of the internationally acclaimed Sciences Po, though she seems to do nothing these days but pig out on junk food, wrap plastic wrap around her stomach to lose weight, and mail raw meat to guys who annoy her. What starts out as a refusal turns into a memorable night of boozing and great sex. Camille is allowed to move in, and while Émilie wants to keep the affair going, Camille just wants his own space. You can almost see him thinking, “Wasn’t she just looking for a roommate?”

Eventually we get an intersecting storyline about a 33-year-old Nora (Noémie Merlant), whose plans for going back to school to study law get derailed when her classmates confuse her with popular camgirl Amber Sweet (Jehnny Beth). She gets bullied by her classmates after she’s mistaken for the celebrity cam girl, Amber Sweet. The humiliation is so intense that she’s compelled to go back to a previous line of work in real estate. Although the Nora character is supposed to create the third element for a love triangle to emerge, the makings of that entanglement are established from the very beginning of the film by Camille’s lack of investment in Émilie beyond an occasional sexual partner.

Paris, 13th District is stronger when it’s in the realm of lovers rejecting puritanism and mastering the art of calibrating carnal enjoyment with intellectual curiosity in one fell swoop. Masters of the depiction of heterosexuality, French-style, such as Eric Rohmer or Philippe Garrel, are known to focus on the lovers themselves, chronicling them as archetypes of a domesticity bound to fail, but having its last orgasmic hurrahs in the meantime, unworried about what comes after the orgy, or the umpteenth glass of wine. These sorts of chronicles are often sustained by a mixture of exquisite dialogue, bordering on pretentiousness, and the barebones simplicity of everyday situations, both of which are absent in Paris, 13th District. Instead of such riches, the filmmakers favor the sorts of narrative shenanigans that may have worked in the graphic novel format but only work to neuter the power of their film.

The camgirl scenario with Amber Sweet (Jehnny Beth) specifically reads like a boomer’s idea of how young lovers deal with feelings and technology these days, or a misguided attempt to appeal to a younger demographic. There’s no reason to believe that the film isn’t set in the present, but when Émilie’s co-workers tell her about this thing called a dating app, it’s as if she’s a stranger to technology. Camille also finds it depressing that someone would resort to such a shortcut for finding sex and love. Indeed, with Paris at their feet, the idea of an algorithmic facilitator of encounters is nothing short of an indecent proposition, cinematic or otherwise.

Needing a job, Nora applies for a position in a small real estate firm that happens to be managed by Camille, who has since broken up with his former co-worker and taken over the firm from a relative to supplement his income. Nora decides to set platonic boundaries between herself and Camille, but eventually falls in love with him, and they enter into a relationship. Camille re-establishes a prickly friendship with Émilie, who has since become a waiter. Camille asks Émilie for advice with his current relationship, but her love for him makes her unable to broach the subject. Meanwhile, Nora tracks Amber Sweet down and buys camming time with her to discuss the incident of mistaken identity. Over the course of many video chats, they become close friends.

Nora and Camille’s relationship becomes strained, and they eventually break up after a sexual encounter in which Nora dominates Camille. On the same night, Émilie’s grandmother dies. When Émilie tells Camille that she feels unable to face her family at the funeral on the coming Sunday, Camille offers to attend with her. Émilie is angered by this offer and asks Camille to either attend the funeral (and thus commit to a relationship with her) or else cut contact with her. That Sunday, Nora and Amber meet in a park. Nora faints after greeting Amber, and then asks her to kiss her. In the apartment complex called Les Olympiades, Émilie is preparing to attend the funeral alone when her apartment phone rings; it is Camille waiting for her.