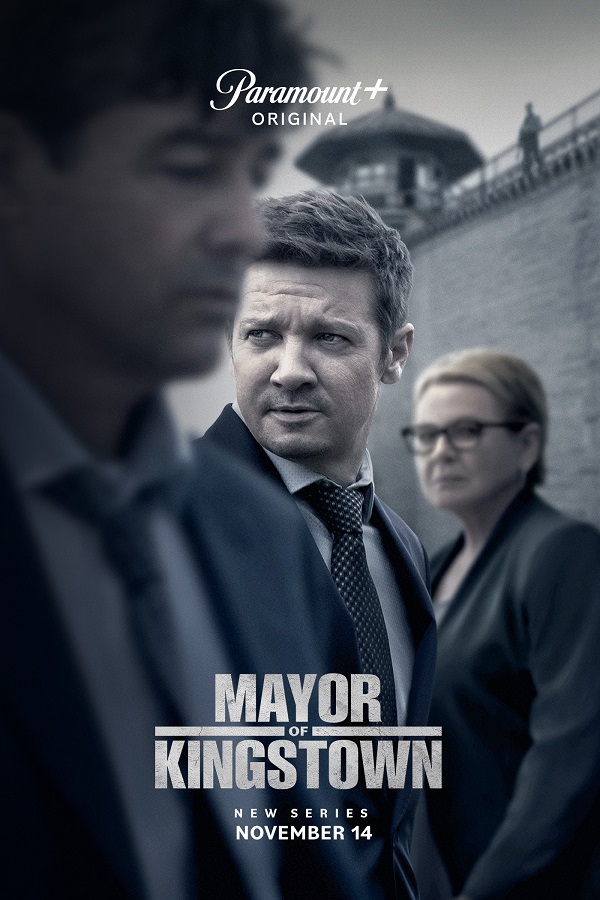 MAYOR OF KINGSTOWN follows the McLusky family – power brokers in Kingstown, Mich., where the business of incarceration is the only thriving industry. Tackling themes of systemic racism, corruption and inequality, the series provides a stark look at their attempt to bring order and justice to a town that has neither.

As part of Sheridan’s deal with MTV Entertainment and ViacomCBS, MAYOR OF KINGSTOWN and 1883 – the YELLOWSTONE origin story premiering on Paramount+ Dec. 19 – are the first from his exclusive multi-year pact, which includes scripted and procedural series for streaming and linear. 101 Studios serves as a production partner on all series.

Paramount Network will air a special simulcast premiere event for MAYOR OF KINGSTOWN on Sunday, Nov. 14, following a new episode of YELLOWSTONE.

Paramount+, a direct-to-consumer digital subscription video on-demand and live streaming service from ViacomCBS, combines live sports, breaking news, and a mountain of entertainment. The premium streaming service features an expansive library of original series, hit shows and popular movies across every genre from world-renowned brands and production studios, including BET, CBS, Comedy Central, MTV, Nickelodeon, Paramount Pictures, and the Smithsonian Channel. The service is also the streaming home to unmatched sports programming, including every CBS Sports event, from golf to football to basketball and more, plus exclusive streaming rights for major sports properties, including some of the world’s biggest and most popular soccer leagues. Paramount+ also enables subscribers to stream local CBS stations live across the U.S. in addition to the ability to stream ViacomCBS Streaming’s other live channels: CBSN for 24/7 news, CBS Sports HQ for sports news and analysis, and ET Live for entertainment coverage.

MTV Entertainment Group reaches over 1.4 billion young people around the world across streaming, social and linear platforms in 180 countries and with more than 725 million social followers – making it one of the preeminent youth media companies in the world.  Connecting with its audiences through nine iconic brands including MTV, Comedy Central, VH1, CMT, Pop, Logo, Smithsonian, Paramount Net and TV Land, MTV Entertainment Studios produces award-winning series, movies and documentary films.

101 Studios is a global entertainment company dedicated to the acquisition, financing, development, production and distribution of high-caliber, creator-driven storytelling. Founded by David Glasser, Chief Executive Officer, and David Hutkin, Chief Operating Officer, the studio empowers content creators through first-class collaboration and innovation. On the television side, 101 produces Taylor Sheridan’s Emmy nominated series Yellowstone, as well as Sheridan’s upcoming series Mayor of Kingstown and Yellowstone prequel 1883. Additionally, 101 Studios oversees and manages the newly formed Sports Illustrated Studios, a content platform based on the most compelling stories, characters and moments in sports past, present and future. Upcoming projects include Paradise Found based on the true story of high school football coach Rick Prinz; a docuseries about the sexual abuse and cover-up at Ohio State University, co-produced by George Clooney and Grant Heslov’s Smokehouse Pictures; and the docuseries Covers, a behind-the-scenes look at Sports Illustrated’s top cover stories of all time. SI Studios has also exclusively partnered with iHeartMedia to create and distribute original podcasts through the iHeartPodcast network. On the film side, past releases include The Current War: Director’s Cut, the Sundance Audience award winner Burden as well as the family comedy The War with Grandpa.