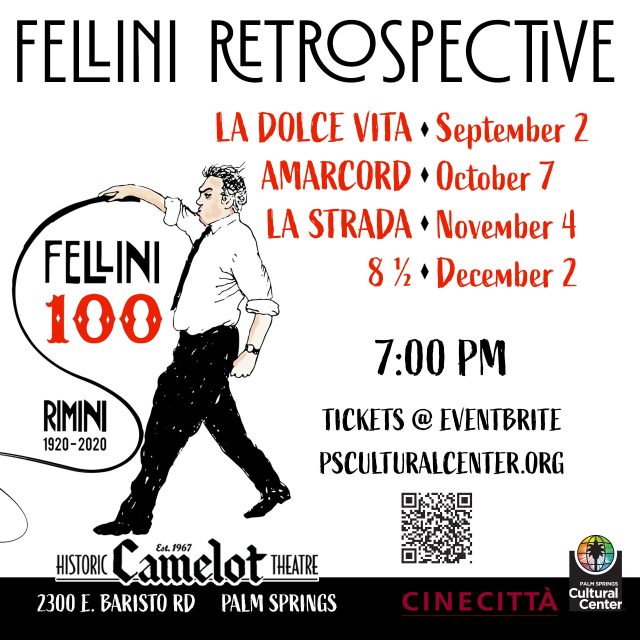 The Palm Springs Cultural Center will join the international celebration of Italian film director Federico Fellini’s (1920–1993) centennial with screenings of his masterpieces as part of the Fellini 100 Tour. Coordinated by Paola Ruggiero and Camilla Cormanni of Luce Cinecittà, the Fellini 100 Tour has traveled to major museums and film institutions worldwide despite being interrupted by the COVID-19 pandemic. The tour launched in Fellini’s birthplace of Rimini, Italy, with the opening of the International Federico Fellini Museum, and has since visited institutions such as UC Berkeley Art Museum and Pacific Film Archive (BAMPFA), the Houston Museum of Fine Arts, the British Film Institute (BFI), the Academy Museum in Los Angeles, and the Museum of Modern Art in New York (MoMA).

One of the most influential directors of the 20th century, Fellini’s films are known for their surreal, dream-like imagery and eccentric characters, often combining a playful carnival-like atmosphere with biting social critique. Fellini’s body of work has inspired several generations of directors including Martin Scorsese, David Lynch, Sofia Coppola and Pedro Almodóvar.

“It’s a tremendous honor for the Cultural Center to partner with Luce Cinecittà in celebrating Fellini’s legacy as one of the greatest directors in the history of cinema.” said Program Director Lauren Wolfer. “These films deserve to be seen as the Maestro intended.”

The Palm Springs Cultural Center’s Fellini Retrospective will play on the first Friday of the month at 7pm from September through December in their Historic Camelot Theatre.

The biggest hit from the most popular Italian filmmaker of all time, La dolce vita rocketed Federico Fellini to international mainstream success—ironically, by offering a damning critique of the culture of stardom. A look at the darkness beneath the seductive lifestyles of Rome’s rich and glamorous, the film follows a notorious celebrity journalist (a sublimely cool Marcello Mastroianni) during a hectic week spent on the peripheries of the spotlight. This mordant picture was an incisive commentary on the deepening decadence of contemporary Europe, and it provided a prescient glimpse of just how gossip- and fame-obsessed our society would become.

Federico Fellini returned to the provincial landscape of his childhood with this carnivalesque reminiscence, recreating his hometown of Rimini in Cinecittà’s studios and rendering its daily life as a circus of social rituals, adolescent desires, male fantasies, and political subterfuge. Sketching a gallery of warmly observed comic caricatures, Fellini affectionately evokes a vanished world haloed with the glow of memory, even as he sends up authority figures representing church and state, satirizing a country stultified by Fascism. Winner of Fellini’s fourth Academy Award for best foreign-language film, Amarcord remains one of the director’s best-loved creations, beautifully weaving together Giuseppe Rottuno’s colorful cinematography, Danilo Donati’s extravagant costumes and sets, and Nino Rota’s nostalgia-tinged score.

With this breakthrough film, Federico Fellini launched both himself and his wife and collaborator Giulietta Masina to international stardom, breaking with the neorealism of his early career in favor of a personal, poetic vision of life as a bittersweet carnival. The infinitely expressive Masina registers both childlike wonder and heartbreaking despair as Gelsomina, loyal companion to the traveling strongman Zampanò (Anthony Quinn, in a toweringly physical performance), whose callousness and brutality gradually wear down her gentle spirit. Winner of the very first Academy Award for Best Foreign-Language Film, La strada possesses the purity and timeless resonance of a fable and remains one of cinema’s most exquisitely moving visions of humanity struggling to survive in the face of life’s cruelties.

One of the greatest films about film ever made, Federico Fellini’s 8½ marks the moment when the director’s always-personal approach to filmmaking fully embraced self-reflexivity, pioneering a stream-of-consciousness style that darts exuberantly among flashbacks, dream sequences, and carnivalesque reality, and turning one man’s artistic crisis into a grand epic of the cinema. Marcello Mastroianni plays Guido Anselmi, a director whose new project is collapsing around him, along with his life, as he struggles against creative block and helplessly juggles the women in his life—including Anouk Aimée, Sandra Milo, and Claudia Cardinale. An early working title for 8½ was The Beautiful Confusion, and Fellini’s masterpiece is exactly that: a shimmering dream, a circus, and a magic act.

All films have been digitally restored by Luce Cinecittà, Cineteca di Bologna, and Cineteca Nazionale.

Cinecittà is the state-owned company whose main shareholder is the Italian Ministry for Culture subsidising its activities on an annual basis. Cinecittà holds one of the most important European film and photographic Archive in which are collected and digitally categorized both its own productions, and materials derived from private collections and acquisitions by a variety of sources. It is a large audiovisual collection concerning the history of the twentieth century, and it has also been inscribed by UNESCO in the registry “Memory of the World”.

Cinecittà distributes and supports domestically the theatrical releases of Italian first and second time feature films; moreover distributes films and documentaries made by Italian and European directors and guarantees they are given an adequate release in the national market.

Cinecittà’s institutional work includes promoting Italian cinema both at home and abroad by means of projects dedicated to the great authors, actors and personalities of the past and their classic films, as well contemporary ones.  These projects are presented in collaboration with the most relevant cultural institutions of the world: the Academy of Motion Pictures, Arts and Sciences, UCLA, University of Berkeley, MoMA, British Film Institute, Institute Lumiere, Cinematheque Francaise and many others. Cinecittà cooperates with major film festival such as Cannes, Berlin, Buenos Aires, Toronto, Shanghai, Tokyo, Locarno, New York, London, etc, by organizing national selections, guaranteeing the presence of Italian films and artists in the various festivals, and by providing multifunctional spaces to help the promotion of our cinematography and it is the reference place for all Italian and foreign operators.  It is also involved with the direct organization of numerous Film Festival around the world: The Italian Film Festival in Tokyo, Cinema Italian Style in Los Angeles, Open Roads – New Italian Cinema in New York, The Festival of Italian Cinema of Barcelona, London, Istanbul , Oslo, Stockholm, Copenhagen and The Mittelcinemafest.

The Fellini Retrospective is a program produced by the Palm Springs Cultural Center, a 501C3 non-profit.  Screening film festivals, revival screenings, retrospectives, and special premieres, the PSCC continues the communities’ storied cinematic legacy that began when their home venue, the Historic Camelot Theatre, originally opened its doors in 1967.