Los Angeles, CA (The Hollywood Times) 9/1/21 – Currently screening at several Lemelle theatres in Los Angeles and online through Mubi, Pablo Larrain’s latest film Ema (Chile, 2021) is sure to create polarized reactions from viewers. This is the story of an empowered woman named Ema whose unapologetic desires determine the course of events. The screenplay by Guillermo Calderón and Alejandro Moreno defies our presumptions and the director Pablo Larrain has taken a direct tack with this film that some of his previous ones, like No (2012), Jackie (2016), or Neruda (2016). Charting a course with reggaetón, often stigmatized as indecent, the film reverberates with a primal beat that seems to shape the title character of Ema. Larrain’s film gives us an incendiary portrait of an artistic temperament forced to contend with societal pressure and the urge to conform. Ema is determined to move freely through the world as she electrifies everyone and everything around her. Ema had its world premiere at the Venice Film Festival in August 2019, where it won the UNIMED Award and was nominated also for the Golden Lion and Queer Lion awards. It is being distributed by Music Box Films and Mubi in the USA.

The film’s setting is coastal Valparíso, the port-city of Chile, where the gifted dancer Ema (Mariana Di Girolamo) divides her time between teaching at an elementary school and rehearsing for an upcoming presentation with a dance company. However, people become quite judgmental about her and her self-absorbed choreographer boyfriend Gastón (a subdued Gael García Bernal) because they have decided to return their adoptive son Polo (Cristián Suárez) to governmental Social Services following a disturbing incident. It seems that Polo, their adopted son, has become a pyromaniac. Early on, our first glimpse at the dynamic between Emma and Gastón is intercut with a group performance against a massive screen displaying a burning sun, at once hazardous and hypnotizing, that on second viewing mimics an egg being fertilized. It’s a mesmerizing illustration of how their temperamental relationship transpires: Always on the verge of implosion because they torment one another with resentful regard. 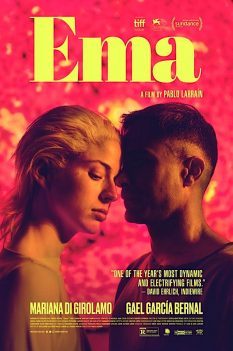 Di Girolamo personifies Ema as if she were a nymph entertained by humanity’s reductive understanding of sexuality. Her devilish mischievousness enthralls people around her like mermaids did to sailors in oft-told legends because she is an alluring sex siren. They know her charm hides the potential for destruction, but they don’t care. She could walk up to anyone anywhere, man or woman, and convince them to surrender the liberty to decide over their lives. Di Girolamo is that alluring. Interludes that roll out as mini music videos between crucial scenes showcase Di Girolamo’s capacity for vigorous physical energy. Taking over town, Ema and her all-female flock of dancers give a hypothetical middle finger to anyone that questions their respectability. The revolutionary act of moving to a maligned beat projects just as much bravery as a conventional protest. Musician Nicolas Jaar comes through with the entrancing, upbeat score to which they claim their space.

García Bernal plays a very subdued male choreographer Gastón who seems impotent against the sexual allure of Ema. At one point in the middle of the film, García Bernal issues a tirade furiously detailing his classist hatred for reggaetón, which correlates to what he thinks of Ema when she dances it. He pathologically wants control over a woman whose brand of feminism is hands-on, full-bodied, aggressive and calculated in her diplomatic maneuvering of traditional circles in order to not to be completely ostracized. At night, however, she ravages the town: theoretically, at sexually uninhibited parties and literally, with violence. Incendiary and remarkably bold, in the same manner that a fire is terrifying and fascinating, Larraín’s character of Ema is in love with fire and seems willing to torch anything that gets in her way. She has a nonconformist dream of love and family and goes to extreme ends to make it happen in the story. Martial and maternal anarchy seem to be her strong suit, until she lands on a handsome firefighter Aníbal (Santiago Cabrera) who teaches Ema how to use a powerful fire hose atop the firetruck, but it serves Ema as an opportunity for getting what she really wants.

Warning them of her propensity for wickedness, Ema begins two separate affairs – one with the male firefighter, the other with a woman who is a lawyer. These seem to satisfy distinct aspects of her carnal and psychological needs. From one of them she demands he doesn’t leave his family, and to the other she coldly denies being in love. Ema is playing a perverse game where people’s feelings are at stake. In her eyes, it seems, the objective is to dismantle the patriarchy by destroying its social institutions and rebuilding them radically to meet her own ideas about family and love. By the end of the film, we are left to ponder whether the story’s central couple still love each other or despise each other. Like the insistent reggaetón beat of the dance in the film, we inhabit for a while the primal pleasures of body and soul as Ema experiences them. Are we like Gastón willing to sit back and attempt to explain things away intellectually or are we willing like Ema to dive into the incendiary and unexplored regions of our bodies and desires?