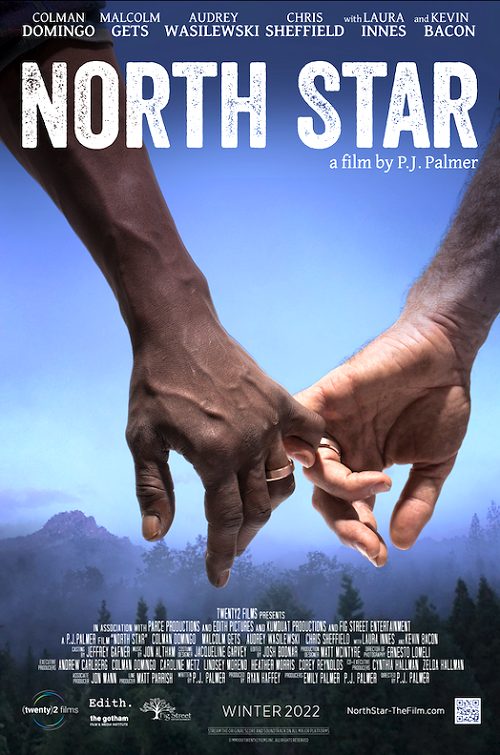 One of the best short films at the recent Outfest Film Festival in Los Angeles was North Star, written and directed by P.J. Palmer. Within the running time of 30 minutes, this short film is deeply moving and incredibly thought-provoking.

North Star tells the story of James (actor Colman Domingo) a rural rancher whose husband Craig (Malcolm Gets) is dying of debilitating ailments not specifically defined yet undeniably causing his significant physical deterioration. As North Star progresses, it becomes readily apparent that Craig’s illness has depleted the couple’s resources yet their love is palpable and James’s tender, steadfast care for his husband is evident in ways big and small.

The intimacy of this care is portrayed realistically, perhaps jarringly so for some, but there’s never a single moment when we feel anything but the love that James and Craig have for one another whatever challenges their life encounters. But for anyone who has ever cared for a loved one in a debilitating condition, the actions of James ring true. We learn more truths about just how precarious a position that James and Craig are in and the difficulty with which choices are being made both out of love and out of necessity.

When Craig’s sister Erin (Audrey Wasilewski) arrives, we feel the tension rise. It is obvious that she cares deeply for her brother, though she rejects his marriage to a man, worries about his soul, and fails to see James as anything close to family. She seems practically incapable of even eye contact with James. One can practically feel Craig’s entire being twist and turn upon her arrival as she brings his medications, administers them, yet also turns his television to “He is Risen! With Owen and Jess,” a televangelism broadcast that clearly condemns her brother and his husband.

Colman Domingo is one of Hollywood’s most under-appreciated actors and he proves here once again how there’s so very little that he can’t do. Domingo possesses a rugged masculinity as James, yet he lives into the tenderness of a man deeply in love who is also living day in and day out in a caregiving role. It’s a remarkable performance that never hits a false note and I found myself utterly astounded by how much Domingo surrendered himself to it. Domingo’s entire filmography has included such films as If Beale Street Could Talk, Selma, Ma Rainey’s Black Bottom, Lincoln, The Butler, Birth of a Nation, Candyman, and Zola among others. He has been a Tony® Award nominee, two-time Independent Spirit Award nominee, two-time Emmy® Award nominee and recipient of a myriad of awards. It so happens that Colman Domingo was the executive producer of North Star as well.

Without ever actually speaking a word, Malcolm Gets is extraordinary as Craig. Bedridden and without use of his frail limbs, Craig is entirely physically dependent on James.  Yet James demands that Craig’s dignity be retained. Watching Gets as Craig is heartbreaking, yet watching him lean into and trust the care of his husband is truly the definition of intimacy.

Audrey Wasilewski’s Erin is not just a caricature of a Christian believer more consumed by her own biases than by living like the Jesus that she believes in. She knows that she is called to love James, but she feels incapable of doing so and hides behind theology she doesn’t completely understand. Yet, rather wisely, writer/director P.J. Palmer’s script never demonizes her. It certainly doesn’t excuse her, but it also never condemns her. As we watch the final encounter she has with Craig before she storms out of the house, we truly feel her sadness.

Kevin Bacon appears on the television when Erin switches the program to Focus on the Family where Bacon plays Tele-Evangelistic Dr. Owen Broderick discussing with Jess Broderick (played by Laura Innes) their views on homosexuality as a sin and their opposition to issue of same-sex marriage. Palmer’s script gives Kevin Bacon a brief yet meaningful scene in which to make an impact alongside Laura Innes.

North Star is, quite simply, one of 2022’s best live-action shorts with an exceptional ensemble cast matched by Ernesto Lomeli’s magnificent lensing, Jon Altham’s atmospheric and immersive original score, and the precise, patient editing by Josh Bodnar. In a year in which Colman Domingo has been recognized by Indy Shorts’s Pioneering Spirit Award, North Star is a dramatic reminder of Domingo’s pioneering willingness to tell stories that demand to be told and to bring dignity and respect to the characters that he plays. I am not sure if the jury for Outfest overlooked this impressive film but it certainly deserved recognition.

P.J. Palmer is a filmmaker of critically-acclaimed and award-winning shows. He has directed, produced and/or written more than 20 narrative short films, documentaries, feature films, web series and commercial projects. He is an alumni to the Edinburgh Film Festival Talent Lab and worked as Artist in Residence with the National Steinbeck Center. P.J. was raised in the rural mountains of Northern California and has always loved the art of telling stories with film. His previous work includes The Grapes of Wrath: We Shall Overcome (2015), For Ed Ricketts (2018), and two episodes of the TV mini-series Ghosted Life (2019).