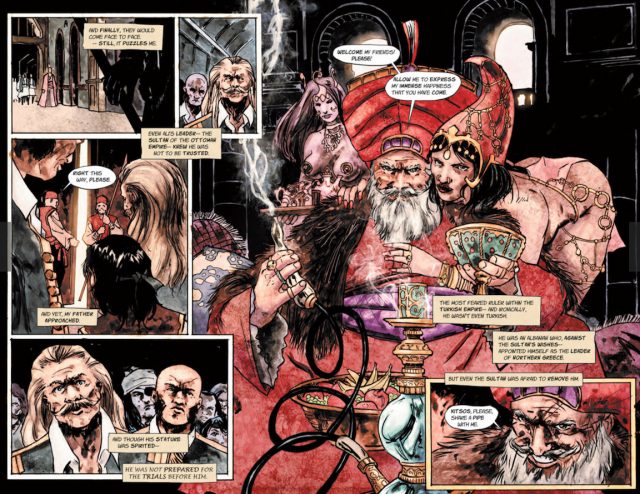 Creating a truly mammoth comic book, Chris Jaymes and Ale Aragon do justice to the nineteenth-century Greek War for Independence. 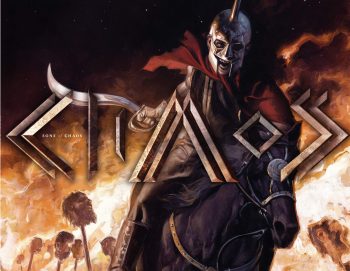 Los Angeles, CA (The Hollywood Times) 8/11/19 – The new over-sized graphic novel, Sons of Chaos, is something to behold. Massive in size and scope, the impressive work by writer Chris Jaymes and artist Ale Aragon transports the reader back to the nineteenth-century Greek War of Independence against the Ottoman Empire. Published by IDW Publishing, the ambition of this project is incontestable. The success of Sons of Chaos (July 2019, $39.99; 192-page, full-color hardcover, 13.5” x 10.5″) resides in the panoramic flow and sweeping vistas of the breathtaking art.

Set in 1821, the narrative focuses on Marcos Botsaris, the son of a respected Greek leader who’s taken prisoner as a child and raised in captivity. However, the most intriguing character is Ali Pasha of Ioannina, the infamous Ottoman leader known as the “Napoleon of the East.” Indeed, the byzantine machinations of Ali Pasha drive the story line. As a brilliant and ruthless dictator, his will and desires dominate what happens even when he’s far away from the actual events taking place. 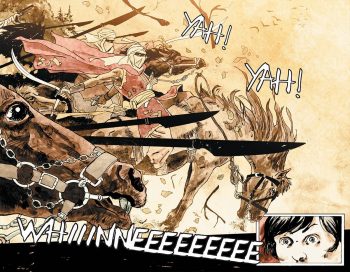 Like Game of Thrones, the gore and killings often overwhelm the emotional reality of the characters. Ali Pasha’s violent son Mukhtar is angry with his father and his second-class treatment. In very different ways, both Ali Pasha and Mukhtar reveal the extent of man’s inhumanity toward man and woman. Although he is a great warrior, Mukhtar is not treated as an equal by his father. His anger erupts into violence against his beleaguered wife, Eleni. A fellow captive who has been forced to marry as part of a political alliance, Eleni falls in love with Marcos virtually upon first sight. The greatest weakness of the epic tale is this love story at the beating heart of the narrative. It’s never convincing.

Ultimately, the love story does not matter because the history of the Greek War for Independence consumes everything in its path. The transformation of Marcos from a frightened boy into a great warrior is necessary for the story, but hard to buy into as a real transformation. Although trained by both friend and foe, Marcos never appears to embrace the warrior mentality. When he finally makes the shift, it seems to be a narrative device to keep the story flowing against the grain of the character’s true nature. Yes, such transformations happen, but they need to be convincing. 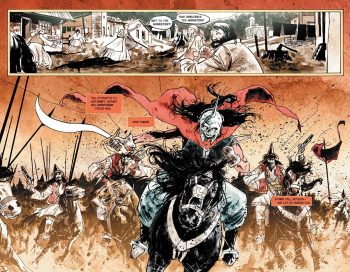 Still, despite these flaws in characterization, the overall flow of the graphic novel is worth the effort of holding such a huge book and reading it for many hours. Indeed, finishing this book is no small feat because it demands such an effort. Great respect must be given to Ale Aragon, the comic artist from Argentina who shines so brightly in this work. A professional since 2008, he has on such titles as Deadpool, 28 Days Later, and Resonant. None of his past work, however, prepares the reader for such an achievement. Taking full advantage of being able to work in such an over-sized format, Aragon creates some of the most sweeping and powerful actions scenes ever drawn.

As the writer, Chris Jaymes bravely ventures into tricky territory. Aside from Frank Miller in 300, very few comic book writers have been able to join the epic and the historical together in a masterful fashion. As a multiple award-winning American writer, director, producer, actor, and musician, Chris Jaymes is a modern example of a Renaissance man. Indeed, his ambition is undeniable.

On the Sons of Chaos website, author Chris Jaymes writes, “I am not a Historian. And this is not a History Book. My hope is that Sons of Chaos will introduce this extraordinary undertaking and bring awareness and stimulate further curiosity to the Greek Revolution.” There is no question that Chris Jaymes has turned his hope into reality. Reading Sons of Chaos does make the reader want to learn more about the Greek War of Independence and the Ottoman Empire.

More importantly, it’s downright impressive that such a graphic novel got published in the first place. How did Chris Jaymes and Ale Aragon convince IDW Publishing to go out on such a limb and publish an over-sized, expensive volume about the Greek War of Independence? Such an achievement is truly amazing. Indeed, one hopes the success of Sons of Chaos will lead other publishers to take such risks. Ultimately, Chris Jaymes and Ale Aragon manage to open a door that rarely is opened. Even with mixed results, graphic novel fans should embrace this work, so it becomes a trailblazer and keeps that over-sized door open for future writers and artists.