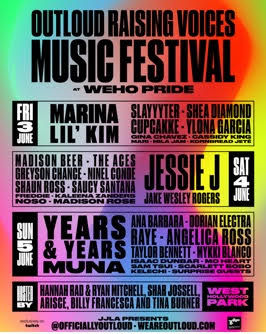 OUTLOUD: Raising Voices is the marquee attraction for WEHO Pride, the City of West Hollywood’s first, self-produced Pride celebration. OUTLOUD champions LGBTQ+ musicians and the community. The three-day experience will include the ticketed music festival and free community programming, all taking place on San Vicente Boulevard and culminating with WEHO Pride’s exciting community parade on Sunday, June 5 at 12 noon.

“I started OUTLOUD three years ago to provide a platform for underrepresented Queer artists. This year, we are fortunate to bring the OUTLOUD experience to the City of West Hollywood to coincide with their inaugural WEHO Pride weekend celebration,” said JJLA Founder & CEO Jeff Consoletti. “OUTLOUD showcases established and emerging LGBTQ+ musicians and what better place to bring the community together to celebrate in one central location.”

Created and produced by JJLA, OUTLOUD: Raising Voices was launched in 2020 as a virtual concert series, highlighting and elevating Queer artists and performers while many Pride celebrations were being canceled due to the COVID-19 pandemic. In 2021, OUTLOUD: Raising Voices partnered with Pride Live’s Stonewall Day and Adam Lambert to deliver a three-day, in-person concert series in Los Angeles, marking the return of live events to the city after the pandemic shutdown. Performers included Sofi Tukker, VINCINT, Brooke Eden, Daya, Hayley Kiyoko and more, plus an in-person appearance from Los Angeles’ Mayor Eric Garcetti. The event, which won a 2021 BizBash Event Experience Award for Best Cultural/Multicultural Event (Live Events & Experiences), was simultaneously streamed on Twitch, garnering 4.8 million views, and providing the artists and queer charities highlighted throughout the weekend a unique and critical global platform.

A limited number of early bird-priced three-day GA passes with unlimited entry are available now starting at $89 until April 3. Single-day tickets will be available at a later date. Ticket holders will be permitted unlimited re-entry during the course of the day with both weekend and single day passes to enjoy all of the LGBTQ attractions and businesses central to West Hollywood.

For additional information, please stay tuned and follow along at http://weareoutloud.com, and on social at @OfficiallyOUTLOUD.

OUTLOUD: Raising Voices, created by Jeff Consoletti, set to debut as a live event, launched in 2020 as a ten-episode series on Facebook in lieu of Pride Celebrations happening in cities across the country due to the Covid-19 Pandemic, quickly becoming of the first major virtual LGBTQ+ showcases. Since its debut, OUTLOUD garnered over 1.4 billion media impressions and won several industry-topping awards including multiple SHORTY Awards for Best Use of Facebook and Best Use of Twitch, a MARCOM Award & a Cynopsis Digital Award for BEST LGBTQ Series. Follow @OfficiallyOUTLOUD #WeAreOUTLOUD. http://weareoutloud.com

About the City of West Hollywood and WeHo Pride

For more than three decades, the City of West Hollywood has been home to one of the largest Pride celebrations in the nation. Hundreds of thousands of LGBTQ people and allies from around the world make West Hollywood their regular destination during Pride. This year marks the City’s inaugural WeHo Pride. WeHo Pride Weekend (June 3 – 5) will include a free WeHo Pride Street Fair representing a diverse array of LGBTQ+ community groups as part of visibility, expression, and celebration; the ticketed OUTLOUD Raising Voices Music Festival; and the inaugural WeHo Pride Parade on June 5. The WeHo Pride LGBTQ Arts Festival (May 22 – June 30) formerly known as the One City One Pride LGBTQ Arts Festival, will take place during 40 days at various locations throughout West Hollywood, along with selected online programming. Additional information about #WeHoPride will be posted at www.weho.org/pride as it becomes available.

Since its incorporation in 1984, the City of West Hollywood has become one of the most influential cities in the nation for its outspoken advocacy on LGBTQ issues. No other city of its size has had a greater impact on the national public policy discourse on fairness and inclusiveness for LGBTQ people. Home to the “Rainbow District” along Santa Monica Boulevard, which features a concentration of historic LGBTQ clubs, restaurants, and retail shops, the City consistently tops lists of “most LGBTQ friendly cities” in the nation. More than 40 percent of residents in West Hollywood identify as LGBTQ and three of the five members of the West Hollywood City Council are openly gay. The City has advocated for nearly four decades for measures that support LGBTQ individuals and the City is in the vanguard on efforts to gain and protect equality for all people on a state, national, and international level. #WeHoPride @WeHoCity