By Jim Gilles and Valerie Milano

In a press statement, Outfest Executive Director Damien S. Navarro said: “As we find ourselves back in a moment where our rights as LGBTQIA+ people are being taken away and our very existence silenced, we know these moves have a greater impact on LGBTQIA+ communities of color. We have continued to evolve Outfest Fusion in ways we hope empower the next generation of storytellers to reshape their own narrative and to drive cultural change.” 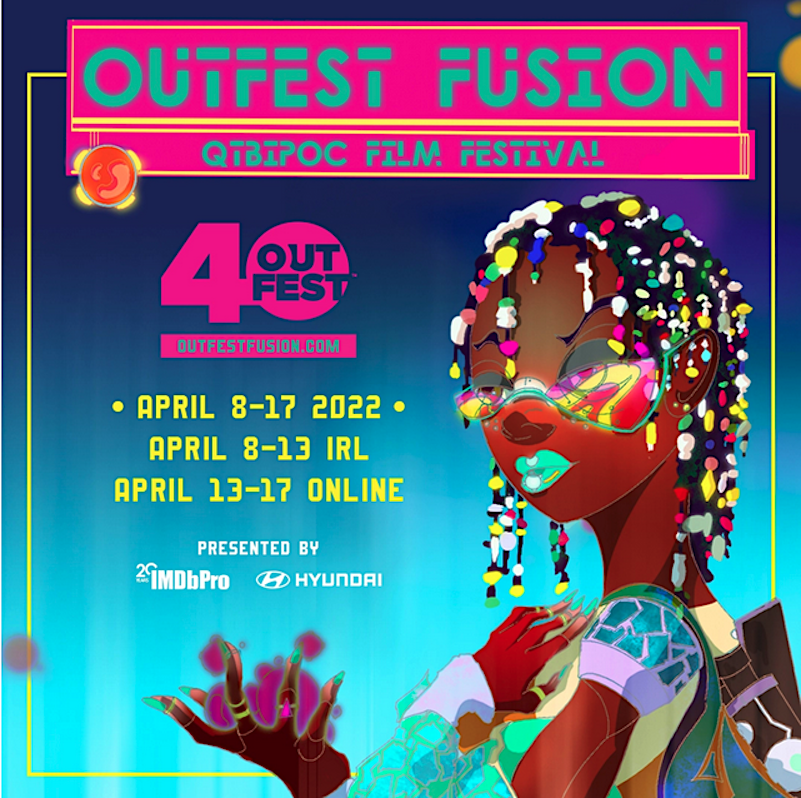 In addition to screenings of these works, the QTBIPOC film festival will also present the One-Minute Movie Contest. Sponsored by Hyundai, the one-minute short films shot by aspiring and experienced filmmakers will be screened at Outfest Fusion Fête on Wednesday, April 13, at the California African American Museum, 600 State Dr, Los Angeles, CA 90037, 7:00 – 10:30 PM. Winners will receive a cash prize and play their film at the Outfest Los Angeles LGBTQ Film Festival in July. Other programming announced includes educational workshops, masterclasses and networking events.

The lineup for the QTBIPOC festival was selected in part by the inaugural class of Outfest Fusion’s programming fellowship, a new initiative that selects young people to screen and curate titles for the festival. The fellowship is presented by Outfest in collaboration with the Programmers of Colour Collective. The fellows for the first edition are Irene Suico Soriano, Josslyn Glenn, Mara Tatevosian, Rico Johnson-Sinclair, and Tishon Pugh.

The lineup for the QTBIPOC festival was selected in part by the inaugural class of Outfest Fusion’s programming fellowship, a new initiative that selects young people to screen and curate titles for the festival. The fellowship is presented by Outfest in collaboration with the Programmers of Colour Collective. The fellows for the first edition are Irene Suico Soriano, Josslyn Glenn, Mara Tatevosian, Rico Johnson-Sinclair, and Tishon Pugh.

Outfest Fusion 2022 will kick off the festival at the Japanese American Cultural & Community Center with a special awards presentation honoring Stephanie Beatriz (Encanto, Brooklyn Nine-Nine) with the Fusion Achievement Award, and Sandra Oh (Killing Eve, The Chair, Umma) with the James Schamus Ally Award. This is only the beginning of the night as we screen a range of short films showcasing the caliber of Outfest Fusion talent. These are a set of short films, including Fawzia Mirza’s The Syed Family Xmas Eve Game Night, Olive Nwosu’s Egúngún (Masquerade), from Nigeria, and Dania Bedir’s award-winning Warsha (Lebanon/France). The Hollywood Times has a separate review article on Warsha.

After the gala opening night screening, there will be a party in the courtyard of the JACCC. The 54 short films are scattered across a host of individual screening sets which are grouped creatively with thematic common threads by zodiac signs, from Aquarius to Scorpio. Check out the line-up online for details of all the films. Of the feature films, I highly recommend Horacio Alcalá’s Finlanda (Mexico/Spain), about a community of muxes, untethered by the concept of binary gender in their town in Oaxaca. The Hollywood Times has a separate review of this fine film. Micheal Rice’s Black as U R addresses trans/homophobia within the Black community in the wake of Black Lives Matter. Bretten Hannam’s Wildhood was well-received at Sundance 2022 and winner of the New Voices Award at the Palm Springs Film Festival 2022.

Wildhood marks the feature debut of non-binary, two-spirit filmmaker Bretten Hannam who hails from Canada. The film (an adaptation of their 2019 short film) is essentially a folksy road trip movie. The trio of Link, Travis and the two-spirit Pasmay travel across the Mi’kma’ki region to try and help Link find his mother and his place in the world.

There is also an interesting documentary Keep the Cameras Rolling: The Pedro Zamora Way. It is the story of Pedro Zamora, the charming young Cuban-born activist who transformed the face of AIDS in America by allowing MTV’s REAL WORLD to chronicle his joy, his influence, and his journey with a disease that would ultimately kill him.

Closing out the main in-person screenings on Sunday, April 10, with be Quentin Lee’s White Frog, celebrating 10 years since its release at Outfest in 2012, with an all-star cast who will be attendance – including Harry Shim Jr., Joan Chen, BD Wong, Gregg Sulkin, Tyler Posey, Manish Dayal, Amy Hill, Henry David Hwang and (hopefully) Booboo Stewart. The film will screen at the Regal LA LIVE on Sunday, April 10, at 5:30 PM.