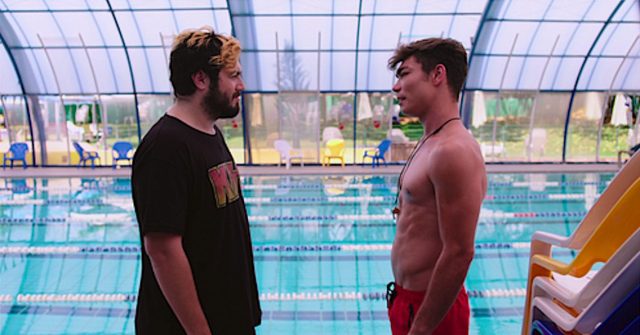 Los Angeles, CA (The Hollywood Times) 8/14/21 – A perennial favorite at the annual Outfest Film Festival is a program known as BOYS SHORTS, which tends to include some of the most interesting short films about young gay and queer men. The films vary in length, ranging from 1 minute to 25 minutes, often just vignettes about coming out, meeting an interesting person, a brief sexual encounter, or dealing with one’s identity. COVID 19 has been particularly tough on young people, and even more so, young people who identify as LGBTQ+. Their safe spaces and social circles were removed, with many sitting in homes where they cannot connect with others and be true to themselves. This isolation breeds fear in the world that lies ahead and a desperate need to reconnect and build new trust and support relationships.

In the BOYS SHORTS, this year are some 10 films and all are worth seeing. Two films that seem to have swimming pools are a point of departure and one might like to credit David Hockney’s paintings of young men in swimming pools as the raison d’etre. One of these in the set is Isak Kohaly’s Complicated (22 min., Israel, 2021), a short story about a man named Itamar (played by Omri Levi) who returns to his mother’s suburban home after a mental breakdown and tried to deal with his over-bearing, exercise-obsessed mother. It is at the local community swimming pool that he meets a handsome lifeguard (Hanny Nahmias) and finds himself dealing with the unexpected attention from this young man.

The other is Luke Willis’ Pool Boy (10 min., USA, 2021), a short film about a college-aged young man home for the summer at his parents’ house and his unexpected interest in Star, the non-binary pool cleaner. Austin (played by Tim Torre) likes sketching in his notebook and shows Star the pool boy his drawings which immediately draw Star’s attention. Star is played by Salvadorean-American intersex actor and activist River Gallo, who received an award at Tribeca for a 19-minute short film entitled Ponyboi (2019), written and co-directed by River Gallo and in which they appeared. Ponyboi is now being developed into a feature film. River Gallo is a recipient of the 2019 GLAAD Media Rising Star Award.

The program closes with Night Train (Nattåget, 15 min., Sweden, 2020), directed by Jerry Carlsson. Oskar (Erik Nilsson) is on the night train, heading home after an interview in Stockholm. With a long night ahead of him, he makes eye contact with Ahmad (Khalili Ben Gharbia). For the first time, he meets the gaze of someone who feels the same desire as he does. One is confident, forward, and aware of the possible outcomes, the other is shy and unsure of taking things further. Their brief but powerful meeting is a “what if” moment of connection, desire, and love in a brief moment in time. And as the train pulls into the station, their paths may diverge, but the memories of their meeting are forever stored.

BOYS SHORTS will screen at the Directors Guild on Saturday, August 14, at 11:00 AM. If you are interested but unable to attend in person, you can watch the program online when it is screened virtually from 8/15 through 8/17. For tickets to the theatrical screening or virtual screening, go to: https://outfestla2021.com/boys-shorts/