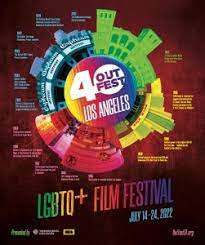 By Jim Gilles and Valerie Milano 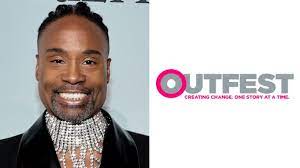 Los Angeles, CA (The Hollywood Times) 7/5/22 – Coming up on July 14 and running through July 24 is the 40th anniversary of OUTFEST, the largest LGBTQ+ film festival, which is taking place at the Directors Guild of America and multiple location around Los Angeles. The line-up includes more than 200 films of all kinds and is presented this year by Warner Bros. Discovery and IMBd. Opening the OUTFEST Film Festival on July 14 at the historic Orpheum Theatre in Downtown Los Angeles is Billy Porter’s directorial debut Anything’s Possible and closing night gala will feature the premiere of the LGBTQ slasher film They/Them. This year, OUTFEST chose to showcase the director Todd Haynes and his 2002 film Far From Heaven, which featured Juliane Moore as a 1950s suburban housewife who tries to deal with her husband’s occasional affairs with men. The red-carpet event and screening of Heaven Can Wait will take place on Sunday, July 16, at 6:30 pm – with Julianne Moore, Todd Haynes and producer Christine Vachon in attendance. 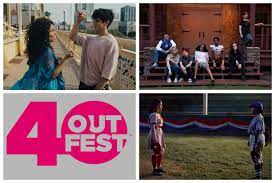 For tickets and more information, go to:: https://www.outfestla.org/films-and-events. A number of the films in the line-up are also available to be viewed online in OUTFEST’s Virtual Screenings which begin on Sunday, July 24. Given the overlapping timings of films, you might want to consider seeing some films at the theatres and others online. 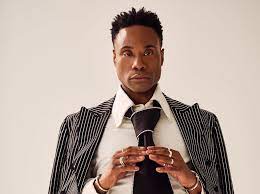 Billy Porter, known for his acting in Pose will be part of the opening night gala events of OUTFEST at the Orpheum Theatre on July 14. His film Anything’s Possible is a delightfully modern Gen Z coming-of-age story that follows Kelsa, a confident high school girl who is trans, as she navigates through senior year. With a screenplay by Ximena García Lecuona, the film stars relative new-comer Eva Reign as a bubbly trans high-schooler and veteran stage and television actor Abubakr Ali as Khal. Hamilton actress Renee Elise Goldsberry plays Kelsa’s mother who has her daughter’s back every step of the way. Orion Pictures will release the film in theatres on July 22 and on Prime Video. 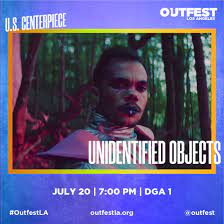 There are some notable Centerpiece pieces in the line-up at OUTFEST this year: The Platinum Centerpiece is Unidentified Objects, written by Leland Frankel and directed by Juan Felipe Zuleta, is a disarming roadtrip comedy with strong performances from Matthew Jeffers (TV’s New Amsterdam) as Peter, a self-described “college-educated, homosexual dwarf, and Sarah Hay as his quirky neighbor Winona. It screens on Wednesday, July 20, 7:00 pm at the Directors Guild of America.

The Documentary Centerpiece is Mama Bears, which screens on Friday, July 22, 7:15 pm, at the Directors Guild of America. There are over 30,000 “Mama Bears” who work to make the world kinder and safer for LGBTQ children of all ages. While they may come from strict religious upbringings and consider themselves devout Christians, the fierce love they have for their queer and trans children is unwavering, pushing them to choose not to be hateful reflections of a loving God. Director Daresha Kyi will be present for the screening along with her film team and the leadership of the Mama Bears.

In the line-up are Sundance Audience Award winner Girl Picture, Sundance favorite Sirens, Brazilian family drama Mars One and the fine documentary Finding Agnes are making their Los Angeles debuts throughout the festival. Tribeca selections include: Gabriel Bier Gislason’s Attachment, a Danish horror film about a lesbian actress who becomes obsessed with a young Jewish woman and the woman’s overbearing Jewish mother who dabbles in the occult. It screens on Saturday, July 16, 6:15 pm at the Harmony Gold Theatre. In a documentary feature, All Man: The International Male Story, you can revisit the history of the jock sock and Gene Burkard’s mail-order catalog with gorgeous male models that set the tone of gay men’s sexy apparel beginning in 1979. Narrated by Matt Bomer, this film promises plenty of eye-catching male models from an era long ago.

World premieres include Stay on Board: The Leo Baker Story, a documentary from Drew Barrymore’s Flower Films and Pulse Films that explores gender identity in the skate world. From the U.K. is a feature film Phea, a “modern lesbian spin on the myth of Orpheus,” which will screen on Saturday, July 16, at 1:15 pm at the Directors Guild of America (Theatre 2).

Definitely worth seeing is Three Tidy Tigers Tied a Tie Tighter, which scored the Teddy Award for Best Feature Film at this year’s Berlinale for this dazzling journey through a not-too-distant future. Brazilian director Director Gustavo Vinagre presents an absurdist vision about Jonata, Pedro, and Isabella– three friends in the working-class suburbs of São Paulo – each attempting to make their way in a world that’s been harshly affected by rampant capitalism, and a pandemic whose disease threatens to claim cherished memories. Screening on Saturday, July 16, 3:45 pm at the Harmony Gold Theatre, I do recommend this film.

A moving film also worth your consideration is My Emptiness and I (Mi Vacio y Yo), a film from Spain by Adrián Silvestre and co-written with lead actress Raphaëlle Perez about a young person’s decision to transform her sexual identify. Perez plays Raphi, a low-level office worker with dreams of being an artist. When Raphi is diagnosed with gender dysphoria, her story becomes a deeply humane exploration of the choices one trans woman makes as she learns to re-enter the dating world, demand more from her sex life, and come into her own as a gifted writer and performer. Director Silvestre had a fine documentary Sediments at OUTFEST last year and this new film promises to be memorable. My Emptiness and I screens at the Harmony Gold Theatre on Saturday, July 16, 1:00 pm.

There are 10 sets of short films included in curated arrangements scattered through the film festival and usually gathered around a common theme. The festival’s episodic section includes a selection of world premieres, including a look at Shudder’s upcoming docuseries Queer for Fear, which examines the LGBTQ influence on horror cinema. Queer Riot, a comedy special headlined by Margaret Cho and a free sneak peek screening of the upcoming Prime Video series A League of Their Own will also take place.

The festival will also hold three nights at the Ford Theater in Hollywood for Outfest Under the Stars, which will feature live performances. Screenings will include the world premiere of Kit Williamson’s new series Unconventional, about LGBTQ siblings in Palm Springs attempting to form a new kind of family. God Save the Queens stars RuPaul’s Drag Race superstars Alaska Thunderfuck, Laganja Estranja and Kelly Mantle alongside Jordan M. Green as a quartet of queens end up in the same group therapy sessions. All four will perform onstage before the screening.