For starters, the original run was March 13-April 5, 2020. It shut down after 2 nights. ”I can’t remember why,” joked director Charlie Mount as he introduced this reopening night. Then, Theatre West, the longest continuously operating theater company in Los Angeles, almost lost its stage forever when the building was put up for sale. At the last minute, an anonymous angel investor bought the place and renewed the company’s lease. I am imagining a deep sigh of relief when the September 23 performance went off without a hitch — vaccination cards, masks and all.

To set the scene: A left-leaning physician named Salvador Allende was elected president of Chile in 1970. The day after that election, Richard Nixon had already decided Allende needed to be removed from office. Our Man in Santiago is a tightly paced, darkly comic look at how the US intelligence service handled that request. 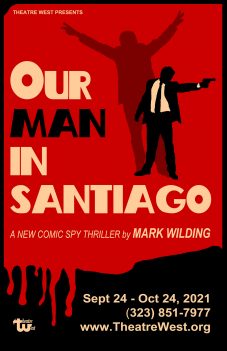 Nixon’s first attempt was botched so spectacularly it became the stuff of CIA legend. By 1973 — the year we pulled out of Vietnam, the year Watergate got serious — Nixon badly needed a win. And so we find ourselves in an upscale hotel room in Santiago with an earnest young CIA agent named Daniel Baker (Nick McDow Musleh) and his cynical handler Jack Wilson (George Tovar). When Baker lets on that he actually cares about the people of Chile, his boss reminds him “you joined the CIA, not the Peace Corps.”

Playwright Mark Wilding has the heart of a civics professor and the timing of a sitcom writer. A TV veteran with credits that range from Ellen (he co-wrote and produced the famous “Puppy Episode”) to Scandal, Wilding believes “your mission is to entertain people, not to teach them.” The fast-paced disagreements between the two CIA agents cover everything from the poetry of Robert Frost to the relative merits of Coke v Pepsi. Their characters are specific, layered and full of satisfying reveals and reversals, and their performances were assured and polished despite this being the first night of the run. Tovar in particular was perfect, and perfectly slimy, as the manipulative Wilson.

Also involved in the action are a housekeeper named Maria (Presciliana Esparolini), who manages to be funny in English and in Spanish, as well as— I’d say “spoiler alert” here but it is in the program — Nixon (Steve Nevil) and his sidekick Henry Kissinger (Michael Van Duzer). And yes, they’re played as buffoons for a couple of historically monstrous power-mongers, but we already knew that “entertain, not teach” is Wilding’s mandate.

Still, it’s impossible not to take away some lessons from Our Man In Santiago. Even though he gestated the idea back in 1974 when he read an article in Harpers by novelist Gabriel Garcia Marquez, Wilding can’t help but point out the similarity to current events. “No matter how hard we try to bring democracy to the world, the world always fights back,” he says. “Heck, look at Afghanistan.”

The production will continue on Fridays, Saturdays and Sundays through October 24.

OUR MAN IN SANTIAGO