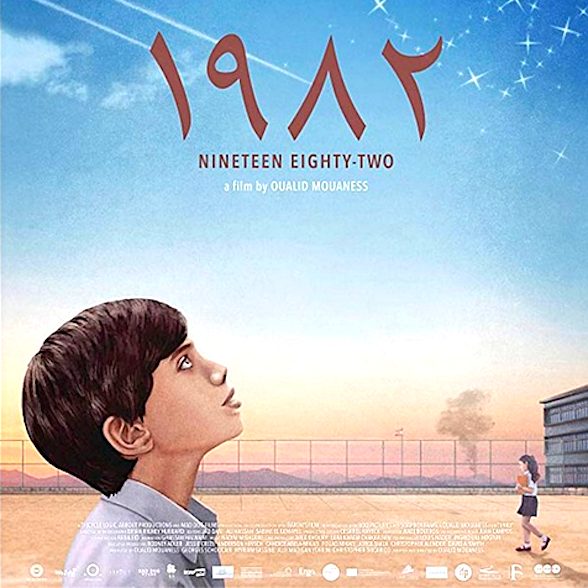 Los Angeles, CA (The Hollywood Times) 7/3/22 – Currently screening at the Laemmle Royal Theatre in West Los Angeles is Oulaid Mouaness’ film 1982 (Lebanon, 2019). Set in 1982, when Israel invaded Lebanon, Mouaness’ film revolves around 11-year-old Wissam (Mohamad Dalli) as he works up the nerve to tell his crush, Joana (Gia Madi), how he feels. While young love consumes Wissam’s mind, his teachers, Yasmine (Nadine Labaki, actress-director of the Oscar-nominated Capernaum) and Joseph (Rodrigue Sleiman), have bigger concerns to deal with. As the thunderous roar of jets fly overhead, and the sounds of bombs dropping inch closer, the pair find themselves at odds over how dire the situation really is. The 1982 Lebanon war began on 6 June 1982, just as students in school were taking their end-of-year exams. Israel invaded Lebanon again for the purpose of attacking the Palestine Liberation Organization. The Israeli army laid siege to Beirut, with heavy bombing in West Beirut. During the conflict, according to Lebanese sources, between 15,000–20,000 people were killed, mostly civilians. The film previously screened in Los Angeles at the Asian World International Film Festival in Los Angeles in 2019.

Oualid Mouaness’ 1982  is a sensitive slice-of-life drama set in Lebanon before the breakout of the war. It unfolds over a single day and follows an 11-year-old boy’s relentless quest to profess his love to a girl in his class. At that point, the biggest worry for Wissam (Mohamad Dalli) is whether or not his schoolboy crush would ever notice him. There’s some drama among his friends and teachers as Wissam tries to navigate the perilous art of elementary school courtship, but all of these mundane concerns are pushed to the side as soon as warplanes soar overhead and the bombings get closer and closer. Will Wissam get the chance to tell his crush how he feels or will he make a rookie mistake?

This charming movie has such a wonderful ensemble cast with characters that feel like they each have their own backstory that it’s easy to get swept up in the tension even before the bomber planes make their appearance. Mouaness uses his protagonist’s youthful look at the world to include a sweet animated sequence where Wissam imagines an anime drawn machines like “Gundam Wing” are the real sources behind the scary noises he’s never heard before. The movie explores what it’s like for a child to make sense of senseless violence.

In his debut feature, director Oualid Mouaness delivers an ode to innocence in which he revisits one of the most cataclysmic moments in Lebanon’s history through the lens of a child and his vibrant imagination. The film demonstrates the complexities of love and war, and the resilience of the human spirit.