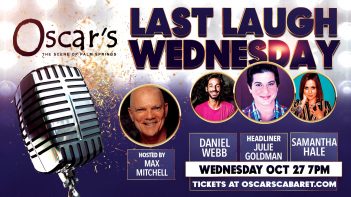 Palm Springs, CA (The Hollywood Times) 10/27/21 – A Wednesday night at Oscar’s Downtown Palm Springs is never a dull affair. From open mic nights to evenings of pure comedy, to Barbara Streisand tributes and fabulous drag shows, they have it all. Maybe you’ll spend a warm December evening with Angie Dickinson or Loni Anderson, Palm Springs style.

But on this particular autumn night, in the waning days before Halloween, Oscar’s Downtown Palm Springs is hosting a particularly raucous night of comedy.

Samantha Hale, daughter of Alan Hale of Gilligan’s Island fame, took the stage to share mishaps at Hollywood pool parties during her youth. And if you know the Hollywood social scene, you know she’s dead on.

You might know Goldman from Bravo’s #ThePeoplesCouch, from HBO’s Curb Your Enthusiasm, or as the brilliant co-host of the podcast DUMB GAY POLITICS.

Goldman is also our kind of humorist. A sort of intelligent, modern answer to the misogynistic and homophobic comedy that still pervades the entertainment landscape. Goldman is vibrant, whip-smart, and devastatingly funny.

And that is truly what Oscar’s on Wednesday nights is about. We left feeling we’d made new friends, laughed ourselves silly, and always, always, felt markedly happier when heading home to recount the jokes we just couldn’t get over.

To learn more about the autumn/winter lineup at Oscar’s Downtown Palm Springs, see their events page.

And you’re very likely to see us there in the future.