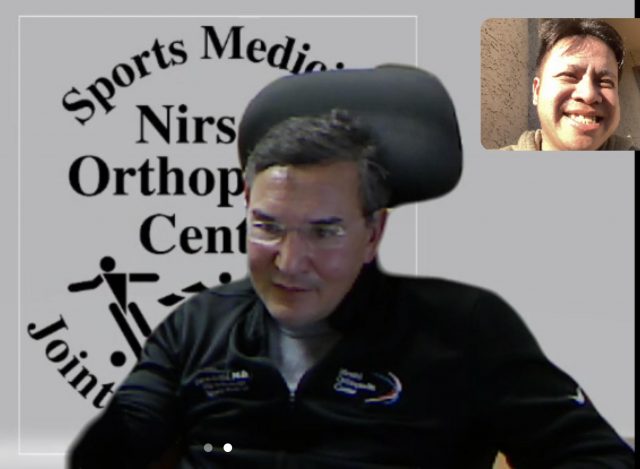 Los Angeles, CA (The Hollywood Times) 12/22/21 – Madonna sustained a major hip injury, which forced her to cancel dates on her Madame X tour. She recently opened up about her subsequent hip replacement, citing the severe pain she went through right before her surgery, but coming out of it better than ever, now referring to herself as a “bionic woman”.

I caught up with orthopedic specialist and expert, Dr. Derek Ochiai, who has a hip sports practice in Arlington Virginia. He shared his overall wisdom and has a great prognosis for Madonna. Ochiai’s practice is focused on minimally invasive surgery, and has become a trusted name as part of a specialty group that treats sports injuries and joint replacement. In many ways, Madonna is like an athlete, due to her intensive routines on stage.

Ochiai first shares that many people that eventually need hip replacement will start having pain their hip, usually the first sign of deterioration. Usually, a lack of motion is noticeable in everyday activities, such as putting your socks on or getting out of your vehicle. Loss of motion is very common in these early stages. Ochiai attributes this to label or cartilage tear, which is a lot of times caused by the way a hip develops in the early teenage years. A long time before people start having symptoms, the problem has already started and there is a slow drip of sorts, into old age. Physical therapy and possible injections would be good treatments in these early stages, and in some cases an arthroscopic surgery can treat the shape of the hip and the labrum tear.

Hip arthritis usually occurs after the cartilage wears away. Ochiai likens the cartilage to the end of a chicken bone which can be scraped away with a fork. Once that starts scraping away and the cartilage is gone, the bone is rubbing against another bone and without a cushion of, severe pain occurs.

The likelihood of hip arthritis can almost be calculated through a math equation, where contributing factors include a genetic predisposition of deformity, the way the hip develops, and the amount of trauma or activity the hip sees. With Madonna performing routines with a lot of wear and tear on her joints, this certainly accelerated the need for a hip replacement.

Recovery is a progression. During the surgery, soft tissue and muscle are cut through the hip joint, so those muscles and soft tissues need to heal, which usually takes 2 to 6 six weeks. But the body also needs to get used to the new hip and using the muscles in a different way. Ochiai cites tennis player, Andy Murray, who ranked number one in the world in 2016. He needed to have a hip replacement and went back to playing competitive singles at a high level. The physical therapy rehabilitation process for an athlete can take three to six months.

Ochiai says, “I do not think Andy Murray is going to win another major championship like he did before he had to have a hip replacement. But it can be a really high level. Tom Watson is a professional golfer, a very famous one, who won multiple majors eight months after a hip replacement. He made it to an A playoff in the men’s British Open golf tournament. So it wasn’t just seniors he was playing against. He played against everyone, including 20 year olds who can hit the ball 300 yards. He was playing at that level and made it to second place, in a playoff to win that tournament.”

Back to Madonna, Ochiai believes a combination of physical therapy, and a choreographer who works with Madonna can get her back to previous levels, with some accommodations being made or changes in the routine. “I doubt if I went to see a Madonna show, like a year from now, that I will be able to tell that she had had a hip replacement.”

In some ways, a hip replacement will be better than the original hip as far as range of motion goes.  Usually when people get a hip replacement, they’ve already been dealing with a lot of pain, arthritis and compromised range of motion. Many are limping severely. In the vast majority of parents, they end up walking better than before. This certainly was the case with Madonna, who has been very open about the pain she had to endure before this new lease on life.

In orthopedic surgery, hip replacement surgery is considered “the best operation overall. The success rate is 97%. It’s the highest success rate that you can possibly achieve,” Ochiai proclaims.

People as young as in their 40’s and the 50’s get hip replacement. But many times, it’s wise to exhaust other treatments before doing the full hip replacement. Ochiai likens it to a vehicle. If it’s not completely broken down yet, there’s no need to do a full replacement prematurely.  Injections, physical therapy and hip arthritis arthroscopy, a scope type procedure, where you keep your natural hip but minor incisions are made, and treatment focuses on rehabilitation of tissues and increasing range of motion.

Ochiai reminds people that if there is degeneration of the hip, the pain is always thought of in the “back pocket of jeans”, but really, it’s in the front pocket of your jeans instead, about 90 percent of the time. “People think it’s something other than their hip, they think they strained their groin, or their hip flexor, or something other than having a hip issue.”

The field of hip replacements is already so good but there is still room for growth. Ochiai cites a picture Madonna posted on Instagram as demonstrating an anterior approach to hip replacement. However, there are other ways such as robotic surgery, which gives more precision and accuracy. Also, implants like the socket implant and femur implants in a more precise position can be highly impactful. Researchers are also looking for different types of surfaces, like different types of metal, plastics, ceramics and other materials to put into the ball, socket and hip.

Ochiai’s final words of advice, “Hip arthritis is a very common problem. If you’re having pain, when you sit for 30 minutes, and it’s in the front pocket of your jeans area, or you notice that you are not able to put your socks on the same way, and that you have to twist your leg differently to get dressed in the morning, that would not be something to ignore. You would want to see an orthopedic surgeon because there are treatments that can delay or possibly even prevent further deterioration to arthritis and needing a hip replacement.”

Dr. Ochiai sees patients from all over the country and can be found at https://www.nirschl.com/ and on social media @drderekochiai where he loves to share tips for preventative care around hip health.