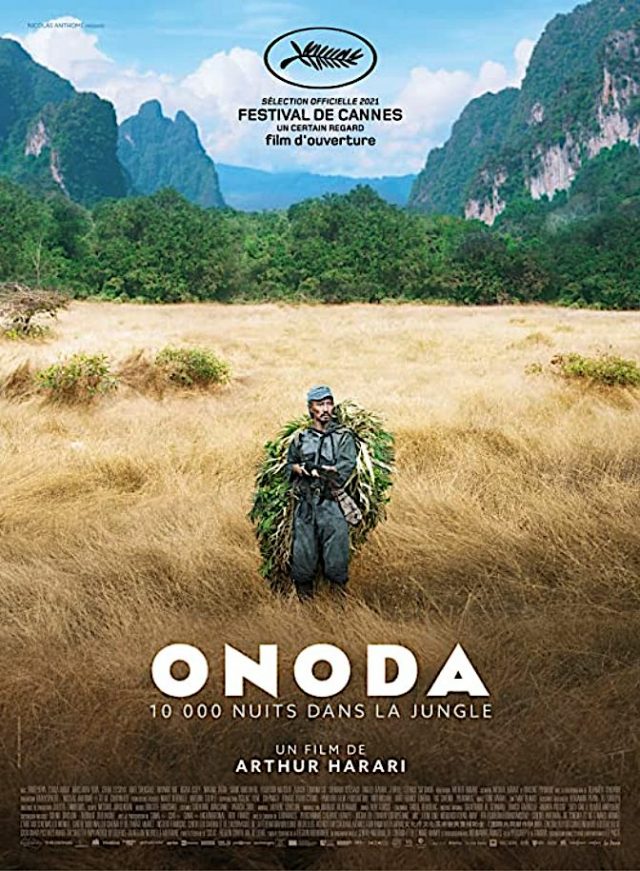 Los Angeles, CA (The Hollywood Times) 11/9/21 – The COLCOA French Film Festival at the Directors Guild of America ended Sunday, October 6, with Onoda: 10,000 Night in the Jungle, a 3-hour-long Japanese film that is a French-Japanese-German-Belgian-Italian-Cambodian co-production that is mostly in Japanese. Onoda, subtitled 10,000 Nights in the Jungle, tells the story of the real-life figure Hiroo Onoda, a Japanese soldier who spent nearly 30 years in the Philippines living out what must be a record-setting case of denial: He didn’t believe that World War II had ended, and he continued to fight for the Imperial Army on Lubang Island – sometimes even killing civilians, according to accounts – until 1974. Leading an ever-dwindling band of Japanese holdouts who refused to believe their nation had lost the war, Onoda continued to carry out minor guerrilla attacks on the residents of the small island of Lubang in the Philippines for almost three decades, until it was just him left, hiding in the underbrush, subsisting on a diet of zealotry and whatever he could scavenge or steal.

French director Arthur Harari’s Onoda is reminiscent of an older style of filmmaking – part John Fo0rd, part Sam Fuller, but nevertheless impressive. Fortunately, Harari chose to describe rather than interpret – thus avoiding the kind of descent-into-madness of a character in a Herzog movie. The calm cinematography of Tom Harari (the director’s brother) in which the caves, coasts and jungles of Lubang, however lush, are never lyricized, nor ever really favored over the human dramas they backdrop. Harari’s film avoids similarly judging him by following his wilderness period with narrow, appropriately blinkered focus. The screenplay by Harari, Vincent Poymiro and Bernard Cendron does not deal with Onoda’s subsequent return to Japan. He was fated to become a kind of national reflecting pool – to be vilified, ridiculed and heroized as a symbol of lost values and vanished national pride

In the telling of the film, part of Onoda’s capacity for self-delusion was taught: Recruited for secret training by a major, Taniguchi (Issey Ogata), apparently because of – not despite – his fear of death, Onoda (played as a young man by Yuya Endo and as an older man by Kanji Tsuda) joins a recruit class of fellow ne’er-do-well soldiers for training in “secret warfare.” They are instructed that one of the rules is that they “don’t have the right to die.” (For others, it might be an honor.) Another rule of secret warfare? Each recruit should act as his own commanding officer – a guideline that Onoda, tasked with leading a guerrilla-style mission on Lubang, really runs with. Split off from the rest, he and a small band of followers give names to various parts of the island and cultivate their own mythology.

The film starts with Onoda being posted to the remote island of Lubang. (He is played as a younger, more insecure man by Yūya Endo, and then by the wired and wiry Kanji Tsuda; the contrast between the two actors is its own commentary.) It ends with his surrender when a tourist (Taiga Nakano) – who has vowed to see, in the wild, a panda, Lt. Onoda and a yeti  – returns to the island with Onoda’s now-retired commanding officer Major Tanaguchi (Issey Ogata) in tow. Like all of the most credibility-defying, seemingly fictionalized or over-dramatized turns that Onoda takes, this is all actually true.

Along the way there are flashbacks to his recruitment by Tanaguchi for a special division of the military trained in intelligence, survival and spycraft, to which Onoda is apparently attached because of his refusal to be part of a kamikaze squadron. While in the wider military culture of Japan at the time, killing yourself if the situation became dire was regarded as a noble, honorable end, this division, as Tanaguchi barks at his callow enlistees, is absolutely not permitted to commit suicide – nor to surrender – ever. Although by the time of his arrival on Lubang in December 1944 the war is already close to lost, and most of the Japanese troops there (whose officers outrank Onoda and therefore obstruct his efforts) will quickly surrender or die of illness or by their own hands, Onoda gathers a small gang of similarly minded men and heads for the hills to continue the campaign. “The four of us can kill hundreds,” he says fervently, once their numbers have decreased further through desertion.

Shimada (Shinsuke Kato), Akatsu (Kai Inowaki) and loyal, longtime second-in-command Cpl. Kozuka (first Yuya Matsuura, then Testsuya Chiba) quickly become the entirety of Onoda’s corps, mounting raids on the locals, mapping the terrain, naming geological features after friends and old lovers, and discounting every attempt to convince them of the Japanese surrender as enemy propaganda. There are moments of levity (a sweet buddy dynamic evolves between Onoda and Kozuka) and loopy mordant humor, as in Onoda cracking a non-existent “code” that convinces him the cavalry are finally coming to the rescue, but Harari never goes for easy pathos without counterbalancing it with the human cost of Onoda’s monomaniacal zeal, his semi-mystical devotion to a duty that died decades before.

The film was mostly shot on locations in Cambodia near Kampot, the old French seaport of this part of former French Indochina. Director Arthur Harari is a French actor and writer, known for La main sur la gueule (2007) and Dark Inclusion (2016). Harai’s film was included in the 2021 Cannes Film Festival lineup.