By Valerie Milano
Pasadena, CA (The Hollywood Times) 3/25/18 – “The fabric of the universe is here.”–Astronaut Jerry Linenger on space flight
Picasso once said, “Learn the rules like a pro so you can break them like an artist.”
The National Geographic Channel will be doing this soon with the new ten-part series ONE STRANGE ROCK hosted by Will Smith that was filmed on six continents in 45 countries as well as from outer space.

This all new series is expected to redefine science and natural history storytelling! ONE STRANGE ROCK is the extraordinary story of Earth, the only place (at least that we know of) that has enabled life to survive and thrive.  This is brought into rich perspective by the only people to have ever left this planet and witnessed its wonder from outer space–astronauts.
How was Will Smith chosen for this high-profile hosting role?  Jane Root responded, “Will is Everyman!”

Smith’s infectious joy about the world pervades the show.  And the world class scientific talent on ONE STRANGE ROCK will literally speak for itself right along with Will Smith.
Darren Aronofsky said that the blend of subject matter should make ONE STRANGE ROCK new and different.  Teams all over the planet were sent to “the most extreme, crazy locations” on Earth and the International Space Station.

All of the astronauts on ONE STRANGE ROCK had very similar experiences out in space.  “I think when you’re here on this strange rock, it’s hard to look outside it,” mused Darren Aronofsky.  But a sense of awe tends to follow anyone who dares to make this ultimate journey.

Chris Hadfield, a native of Canada, was temporarily blinded in space.  Scary as something like this can be, it’s not like you die all of a sudden.  Hadfield’s astronaut training allowed him to stay calm and take instruction from mission control about opening the valve in his spacesuit to evaporate his tears!

“I came back with a great sense of satisfaction at having done something really rare,” said Hadfield.  If anything, the incident made his spacewalk more memorable because he overcame the challenge and his team got everything done.
And how do you turn that kind of uncommon experience into something that everybody else can not only marvel over, but maybe learn from?  The answer: by creating a tell-all show like ONE STRANGE ROCK!

So many docudramas are being made about planet Earth now that it’s in crisis with global warming, terrorism, and other worldwide ills.  Astronauts acquire a unique perspective on these many problems from space.  What are some common themes that they might discuss on ONE STRANGE ROCK?
“It’s a planetary perspective,” said Jeff Hoffman.  “If we’re going to solve our problems on Earth, it has to be done on a planetary level.  So we’ve got to be able to see the Earth as a planet.  I think this show will accomplish that.”

“We’re all these space travelers on Earth, that’s our spaceship,” said Mike Massimino, echoing American physicist Carl Sagan of NOVAfame.  “We’re supposed to see it from a distance!”
“I think the ultimate achievement is if the audience comes away from something and they look around with fresh eyes,” proposed Arif Nurmohamed.

Leland Melvin added, “[Once] we had this meal [on the ISS] with people the US used to fight against, the Russians and Germans.  It was a Benetton commercial: African American, Asian, French, German, Russian, first female commander.”  Melvin’s ‘ah ha” moment came when he broke bread (in the form of rehydrated meat and vegetables!) with his ISS friends and colleagues–in the Russian section.

“And that’s what we wanted, to help bring that message of family and home back down to the planet so that we all come together as a race, the human race,” concluded Melvin.  (Sniff!)

What a wonderful world indeed!  But what might be some less positive projections about our planetary future?
Nicole Stott thought that ONE STRANGE ROCK stood out for reintroducing us Earthlings to our own home.  “You know that every system that operates here [on Earth] that keeps us alive is connected in some way and interdependent,” Stott said.

“First you have to fall in love with the planet; then you can save it,” said Jane Root.  “I think that sense of love and passion, at its core, which then leads you to save it, to action, that’s the heart of what this show is.”
“I don’t think the question is so much saving the Earth.  The Earth is going to do okay.  It’s been around for a long time,” said Jeff Hoffman.  “The real question is whether it’s going to be able to continue to support humanity.  So if I’m concerned about anything, it’s more about the future of humanity than the future of planet Earth.”

ONE STRANGE ROCK takes us through the thrilling story of Earth’s lifelessness becoming life.  “Seeing different countries, seeing different cultures, seeing the smallest microbes to the largest mammals helps us to understand that we belong here, that we’re connected.  So as people are able to do that, then, hopefully, they’ll be able to understand that they have a responsibility and they also have the power and the authority and the right to intervene and do something so that this remains our home,” concluded Mae Jemison.  Preach on!

Most would agree that Earth’s astronauts are some of its finest heroes.  What is the one quality they all seem to share as they boldly go where few have gone before? 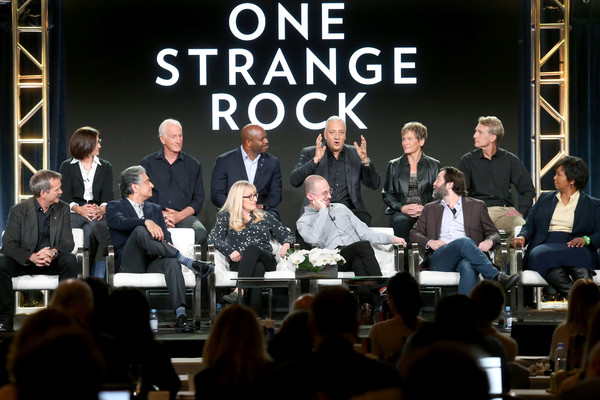 In fact, boldness is not always the best approach owing to the grave dangers of space travel.  According to Mae Jemison, astronauts must be “almost OCD” in their cautious attention to small things that could cause big problems.  But calculated risks come with the turf.

“So the question is, what is worth doing in life and why?” suggested Chris Hadfield.  “Fundamentally we all agree that there are things beyond ourselves that are worth risking our own lives for.”

Jeff Hoffman is an avowed risk taker who has climbed mountains and jumped out of airplanes like his father, his brothers, and many other astronauts.  But no one wants to throw their lives away in space!
Together, Jeff Hoffman and Mike Massimino fixed the Hubble Space Telescope, turning this critical situation from a colossal failure into NASA’s greatest scientific achievement.  Those kinds of moments that stay with astronauts for the rest of their lives are definitely worth the risks.

What might millennials with their tremendous access to new information have to learn from this slightly older generation of brave explorers who were born even before space flight?  Quoting an African proverb, Mae Jemison said, “No one shows a child the sky.”  Until now!
The scintillating blend of technology and life sciences is what keeps humans going back to space as astronauts.  Such death-defying adventures should attract viewers of all ages to ONE STRANGE ROCK.  Shows like this can break down barriers, engage both the mind and the heart, and help those of us back on Earth to get a bigger picture.

“Going on a spacewalk is like somebody turned on the lights!” exclaimed Peggy Whitson.  Wow!  You’re not in Kansas any more, and it’s colors like you’ve never seen before.
How to share experiences like these in ways the uninitiated can understand?  Perhaps through art, photography, and other intense visual images like those scattered throughout ONE STRANGE ROCK.  Musicians and professors can also play a big role back on Earth.
Spreading the word about the wonders of space and our own small planet may feel like an obligation, but is always an exciting one!  “It’s a privilege and a responsibility,” insisted Jeff Hoffman.
“Introspection coupled with that grand view of the world was transformational and changed my life forever,” chimed in Jerry Linenger for the first time.  And let us all hope that ONE STRANGE ROCK inspires the very same response in its viewers when it launches on March 26th!  There really is no place like home.