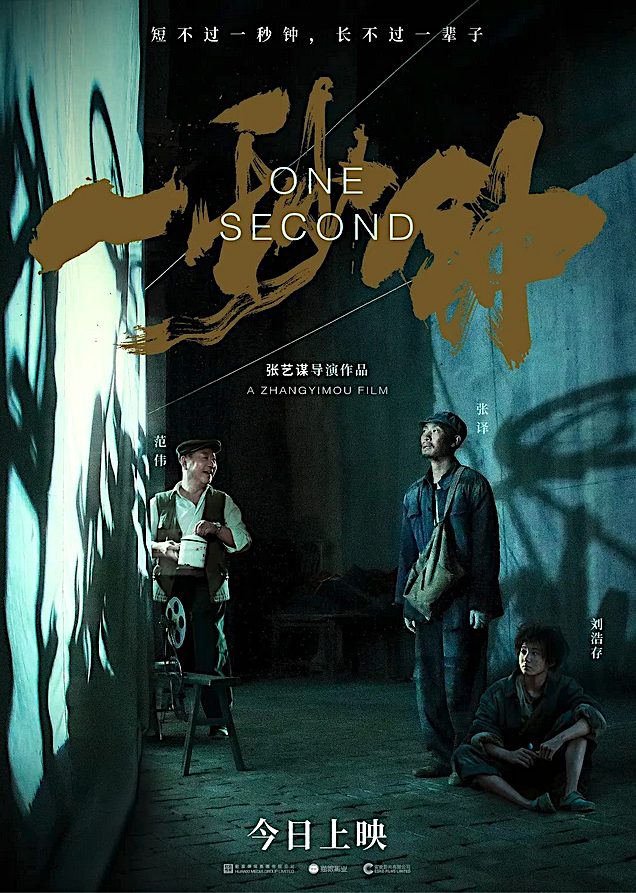 Newport Beach, CA (The Hollywood Times) 10/28/21 – Last evening (October 28) was a premiere screening of Zhang Yimou’s latest film One Second (China, 2020) at the Newport Beach Film Festival. It is the story of the struggles of an ordinary man in China during the time of Mao’s Cultural Revolution and also a sentimental tribute to the bygone era of celluloid films. The film has been picked by Neon in North America and will be in theatres soon. The Newport Beach Film Festival made One Second is their Chinese Spotlight film and invited prominent sponsors from the Asian community in Orange County to attend, including Dr. Marissa Pei and Cecilia Liu. The audience was treated to a 30-minute music concert of traditional Chinese music performed by students who are part of the UC Irvine Chinese Orchestra. The story takes place in the early 1970s at the height of Mao’s Cultural Revolution in the story of one man’s struggle to find a newsreel that he’s heard contains footage of his daughter. We learn that this man (Zhang Yi) had been arrested and sent to a re-education farm prison and has escaped. Because his family denounced him prior to his arrest, he sees the film footage as his last chance to see her.

Zhang Yimou’s One Second opens with images that suggest one of the Chinese auteur’s wuxia period films, like Hero (2002). The film opens with billowing sand dunes near Dunhuang, in the Kumtag Desert of northwestern China. This conjures a feeling of timelessness, and when a man (Zhang Yi) appears in the background of the frame, slowly coming up over a dune, it feels as if we are in the realm of myth. Only when the unnamed man, an escapee from a farm prison, reaches a town where everyone is dressed in the Zhongshan suits popularized by Mao Zedong does it become clear that One Second is set in the midst of China’s Cultural Revolution. What follows is a less grandiose but no less impressive feat of filmmaking than we are used to from Zhang as he trains his lens on a man whose every paranoid step reflects a people’s desire to liberate itself from oppression.

As the man sneaks around the northern Chinese town, it’s revealed that he’s on the hunt for a newsreel that he’s heard contains footage of his daughter. Because his family denounced him prior to his arrest, he sees the footage as his last chance to see her. Complicating his attempts is Liu (Liu Haocun), an orphan who steals one of the film canisters being loaded onto a bike outside a movie house. This sets off a cat-and-mouse chase that plays out across the film’s first half, with the man and orphan taking turns stealing the canister from one another.

Where the escapee naturally attempts to keep a low profile, Liu glibly takes every chance to call attention to their spat, sending the man into a panic with threats of bringing local security patrols over to investigate their imbroglio. Throughout, Zhang plays up the pair’s caustic chemistry for odd-couple comedy, as in his use of quick insert shots of their thieving sleights of hand or smirks of triumph when one of the two momentarily thwarts the other.

Eventually, the prisoner gets the upper hand and presents the canister to the projectionist, Fan (Fan Wei), at another town’s movie house, only for the other reels to show up completely unspooled, having been dragged through the dirt by a mentally challenged young man (who turns out to be Fan’s own son). Fan, terrified of losing his position and possibly facing dire consequences for being responsible for a ruined print, refuses to show a moment of the film until all of the celluloid has been repaired. As such, he swiftly marshals the townspeople into helping him untangle and clean the film.

Much of the film’s middle section is spent inside a backroom where the 35mm strips have been untangled, washed, and hung to dry like noodles. As people bustle back and forth, sunlight beautifully refracts off of the film. And all the while, the convict grows increasingly anxious and hostile about being able to watch the newsreel, even as he and Fan bond over their shared love of film. For his part, Fan makes nervous gestures toward informing on the prisoner, but he’s moved by the man’s life story and strives to help him fulfill his quest to glimpse his daughter on the big screen.

The film’s title captures the essence of the main character’s quest: to find the precise moment in the newsreel where his daughter appears. One Second is attuned to the struggle of this man clinging to a life that was stolen from him, even though it functions primarily as a tribute to a bygone way of looking at movies. The sun-dappled strips of 35mm film are warmly nostalgic in a marked contrast to the anxiousness with which our main character looks for the proverbial needle in the haystack, with Zhang making metatextual use of film itself as a compositional element to articulate, even fetishize, the tactility of celluloid.

In the 21st century, Zhang has been broadly viewed as a sellout to China’s censors, for ostensibly becoming less politically critical and more nationalistic, thus explaining why he was chosen to direct the opening and closing ceremonies of the 2008 Beijing Olympics. The sentimental streak of One Second nominally places it within Zhang’s latter-day filmography, but it’s telling that the film was withdrawn from festivals last year, presumably due to censorship issues and fears that it would cast a spotlight on a part of Chinese history that the government would prefer stayed hidden. And it probably explains why a coda was added to the film, showing the prisoner released from the farm prison in 1975 when Deng Ziaoping took charge of China. Despite whatever changes were forced upon the film by the CCP, one cannot avoid the haunting faces of his characters in One Second and what that tells us.