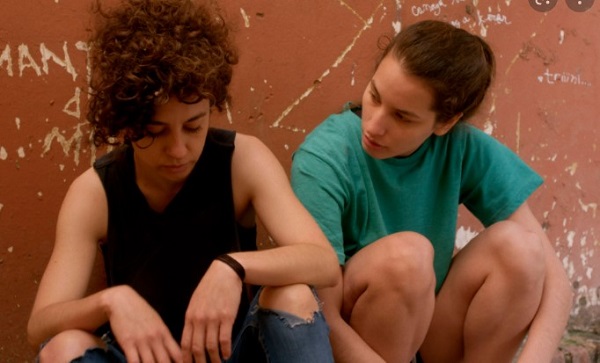 One in a Thousand is the second film by the stunningly beautiful and talented, young Corrientes’ writer and director, Clarisa Navas. She paints a complex and layered, gritty, and lucid realistic picture in this film. One that teenagers and young adults of the LGBTQIA+ community live off the big screen every day of their young lives regardless of what country they may reside. A search for: authenticity, self-awareness, self-acceptance, discovery, identification, purpose, where they belong in a harsh unwelcoming world, and the quest to indeed be accepted as they attempt to fulfill their desires to acquire romance and love. The same questioning affirmations all teens seek however they identify sexually. The baseline: It’s hard enough for children outside of the LGBTQIA+ community, in general, to maneuver the multitude of challenges into maturity. Those of the LGBTQIA+ community are even more so burdened in that transformation of growth.

They must wrestle a world where a large segment of their particular societies paints a different picture of the life they are expected to live despite its soul tearing authenticity from the bones of these young humans’ entangled lives. In the process, attempting to deny them many freedoms. Certainly, to love whom their hearts draw them to while disassembling their dreams and hopes for the future. As a result and these prejudice-based exceptions, they are left confused, frustrated with self-doubts, unwarranted shame, and an internal and external struggle—a battle to be who they were born to be at their core. All tragic facts that Navas knows all-too-well from personal experiences in her quote: “What can you do when faced with a context that tells you that you won’t be able to live in a certain way.”

The music of One in a Thousand fluctuates between sedate-to-escalating, passionate-to-somber. Both pulling, moving along the story of four teenagers forging friendships while experiencing their sexual awakening growing up surrounded by the defects—the garishness of poverty in a debased and grimy community housing project in the neighborhood of Las Mil (The Thousand) Casas, in Corrientes. A province in the northeastern region of Argentina. During the daylight hours, there is no enshrouding from that glaring unsightliness of the slow crumbling of life and buildings border by littered trash. Only in the shifting shadows afforded by night is there any reprieve for young eyes and their souls thirsting to escape not only the backdrop of their environment but equally weighted with their absconding from bullying, restrictions, fixedly staring eyes of disapproval, and other judgments.

This coming-of-age narrative is lead by the two main characters. Two girls find each other but must face undesirable obstacles set before them from all four corners—some of which are unique to lesbians. As conveyed in the movie: “The smaller the town the bigger the hell.” An awkward, shy, and athletic seventeen-year-old, Iris (Sofía Cabrera) with a knotty past, drops out of school. She spends the majority of her time with her two gay cousins, Darío (Mauricio Vila) and Ale (Luis Molina). Iris oftentimes wayfares around the neighborhood while bouncing her basketball as if it were a safety net and a friend. She comes to meet an older and confident Renata (Ana Carolina García), with a ponderous past of her own. Iris’s instant captivation with Renata leads to a friendship that unfolds into a provisional yet unfeigned young love within their belligerent habitat. Many of the scenes are tender while others a reflection of two daunting worlds—especially the one within the boundary of Las Mil. Still, hopelessness turns into hope.

Whether on the large or small screen, more movies must be made to show teenagers and reassure all in the LGBTQIA+ community that there is nothing wrong with them concerning their sexuality and their individual authenticity. That their concerns and feelings are legitimate. That they, as human beings, have great value and much to offer themselves and the world. That their lives are relevant. That love is love.