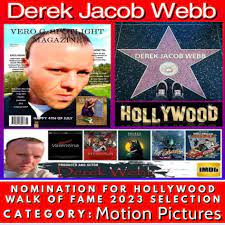 Hollywood action film star, Derek Webb spoke to the editor chief of Spotlight Entertainment magazine Veronica Gonzalez, who most recently wanted him to appear on the upcoming feature front cover edition of this prominent magazine. Webb told Spotlight Entertainment magazine that he was all for doing another front cover special appearance. However this time he would like to make it even more special, with another special celebrity guest appearing alongside him on the front cover. It was then both Webb and the original Wes Craven scream queen, Nancy Ridder, had connected through social media. Hollywood film star and Hollywood walk of fame nominee of 2022, Webb reached out to the scream queen.  They spoke and agreed to do a front cover appearance, together on the front cover of what is now grown to have the nickname, “The bloody valentines day massacre cover.”

The two stars are both very excited about their front cover experience. Nancy was very honored and happy to work with him on such a phenomenal cover.  Veronica Gonzalez of Spotlight Entertainment magazine is the editor chief & executive of the magazine.

Spotlight Entertainment magazine’s Gonzalez is a phenomenal star herself.  Known for many of her hit music singles albums, especially her hit music album Victory, which is now on sale. Webb and Ridder are honored to be collaborating with Gonzalez. The front cover of Spotlight Entertainment Magazine will be released on February 1st, 2022. They will both be given two exclusive Hollywood interviews for their fans, viewers and readers and it will be available to purchase online at Magcloud.com or and be available to fans, readers, audiences on many store shelves. “As a team with one another, especially working alongside both scream queen Nancy & Veronica of Spotlight Entertainment Magazine has been an amazing experience,” said Webb. ” I’m looking forward to continuing to work with them,” he added.