Los Angeles, CA, (The Hollywood Times) 5/10/2018–“Imagine if your idol could walk a mile in your shoes, recognize your special ability and change your life forever? This is what you’ll see this season on the celebrity edition of Undercover Boss—along with state-of-the-art disguises, trickier undercover situations—and the greatest payoffs yet.” -Greg Goldman, Executive Producer of the new series.

The CBS Television Network is offering viewers a new reality series and hoping to titillate the senses and hold our long term interest by placing celebrities and well known personalities on its first full season of Undercover Boss: Celebrity Edition. The show, produced by Studio Lambert/All3Media America, is not new. CBS aired two episodes in May of 2017 featuring GRAMMY Award-winning musician Darius Rucker and chef  and restaurateur Marcus Samuelsson with much success.

Undercover Boss, the parent series, debuted in 2010 with an amazing 38.6 million viewers. The show is based on executives going “undercover” within their own companies to ensure company policy and standards are being followed as prescribed. With the record breaking success of the debut series, it is safe to say that CBS is hoping for the same record breaking status with the Celebrity Edition series of Undercover Boss.

Debuting Friday, May 11th at 8:00 p.m. on CBS and CBS All Access, three-time Olympic Gold medalist, Gabby Douglas, is the first celebrity to be featured on the first full season of Undercover Boss: Celebrity Edition. She is disguised as a middle-aged gym owner in search of talented and gifted gymnasts and coaches to offer them an opportunity to have their dreams come true.

Undercover Boss focuses on executives dressed in disguise going undercover within their own company in different locations around the country to observe the day to day running of the business to ensure all runs well.

Well, without fail, a few of the employees highlighted, who have a “tug at your heart strings” story are “surprised” at the big Undercover Boss reveal. They find out that the person they were really interacting with on the job is the top executive or one of the top executives of the company.

Rewards ranging from pay raises to new positions, and or vacations are handed out to the featured employees.

After a few times of watching, the whole thing can become very predicable and cause one to lose interest quickly.

On the other hand, on Undercover Boss: Celebrity Edition, celebrities are undercover and in disguise as well. The show holds our interest as it unfolds and we get a glimpse of what it’s like for the talented individuals highlighted to receive a kickstart to their career or profession with the help of the undercover celebrity.

All participants are chosen by the producers of the show, but some how it works better when a “celebrity” is involved. Most of us would be thrilled to have a high ranking, influential celebrity doing what we aspire to do in life help us get our foot in the door of our respective field of interest. 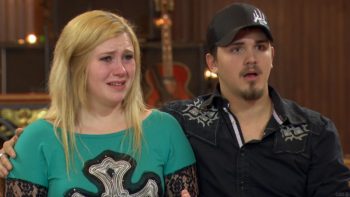 I’m a fan of certain reality TV shows and Undercover Boss: Celebrity Edition is one at the top of the list.

Should you watch it or Skip it? I definitely say, “Watch it!”

COMING TO CINELOUNGE THEATRES DURING THE WEEK OF OCTOBER 8: LAMB; SILENT HOURS;  LOVETT OR LEAVE IT, CELEBRITY 80s WORKOUT