Los Angeles, CA (The Hollywood Times) 7/2/21 – Olivia Charmaine Morris is a television and film producer based out of Los Angeles, CA. Morris is also the CEO and Founder of Black Monarch Entertainment. She began her career as an actor and theatre performer, but upon arriving at college, she decided to pursue the business side of the entertainment industry, receiving a BFA in film and television production from New York University.

After graduating she became an executive of Original Scripted Programming at TBS (Warner Media). In this position, she sought out new talent, delivered fresh ideas, and maintained shows such as, “The Last OG,” and “American Dad.” She then joined Kerry Washington’s Simpson Street as the Senior Director of Development and Productions. There she worked on the business side of animated content and comedy development.

In August 2020 Morris parted ways with Simpson Street to start her own company offering full-service development and production. She goes on to name the company Monarch Entertainment, centering her work around celebrating and supporting ‘’otherness.”

How did you get your start in the film industry?

I was an actor and musical theatre performer from early childhood until I reached college. I wanted to get a better understanding of the business side of the entertainment industry, so I obtained a BFA in Film and Production from New York University. I then began my career working on the business side of animated content and comedy development.

Tell us about your IG TV show, “The Tea,” what should viewers expect?

The show is centered around amplifying voices and personal experiences with my guests being primary women and people of color. My goal for every show is to create a comfortable vibe that allows guests a safe space to tell their stories.

What does your company Black Monarch offer to artists?

Black monarch is more of an artist’s collective for people of color to tell their stories in hopes of driving social change.

What advice would you give to others following similar journeys?

It’s always important to have clear set values and boundaries because you will run into bumps in the road. This industry is tough and wasn’t necessarily built for people of color, so we must seek comradery and create safe spaces where we can build each other up.

What can next for you? 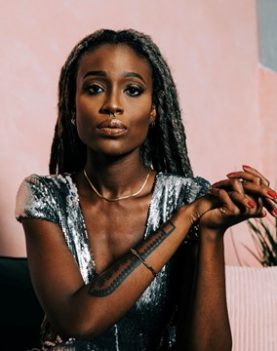