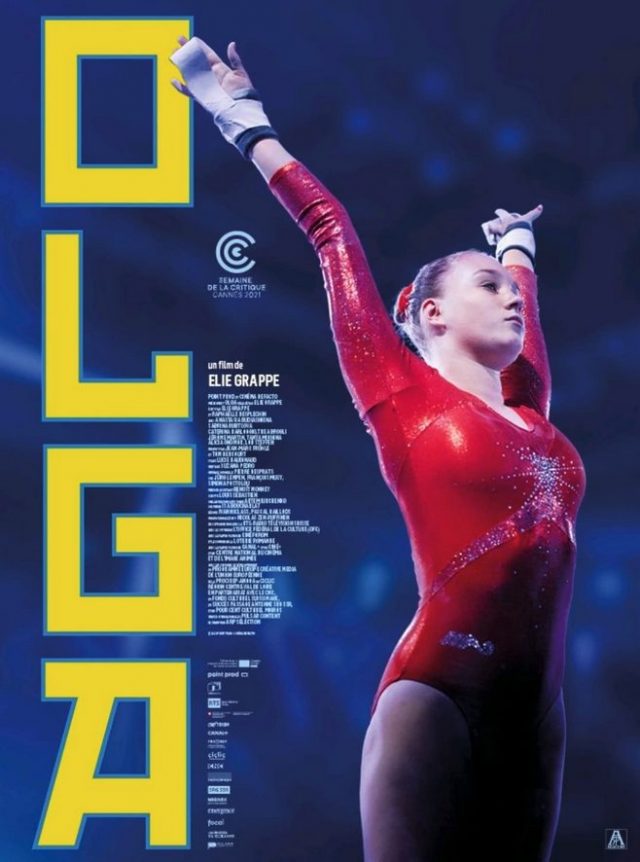 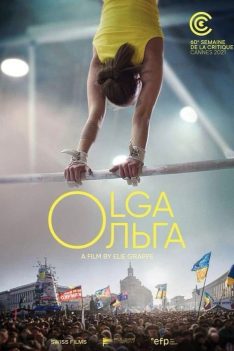 Los Angeles, CA (The Hollywood Times) 11/3/21 – At the COLCOA French Film Festival at the Directors Guild of America in West Hollywood was a screening of Elie Grappe’s film Olga (2021), a touching coming-of-age story about a young Ukrainian female gymnast set into the context of the Ukrainian Maïdan Revolution of 2014. Olga premiered at this year’s Cannes Film Festival and has been selected as Switzerland’s submission as Best International Feature Film for the 2022 Academy Awards. The film is centered on the bodies of gymnasts in action in Switzerland, where the European team of hopeful Olympic female gymnasts are training. At age 15, Olga (Anastasia Budiashkina) is a budding champion, amongst the best Ukrainian gymnasts and aiming for the European championship. But her journalist mother’s investigation into the corruption prevailing at the highest state level in 2013 in Kiev raises direct threats to their lives. In order to keep Olga safe without her having to give up on her sporting ambitions, her mother sends the teenager (a very determined young woman: “the boss, it’s me!”) to Switzerland, the country of her deceased father.

Staying with a host family a few feet away from the training center of the Swiss national team, Olga will have to prove herself on the rigs (with her new coach and surrounded by teammates who are not all happy with her arrival), but also withstand the reality of exile at such a young age (talking on Skype with her mother and with Saha (Sabrina Rubtsova), her closest friend and former teammate) and contemplate abandoning her Ukrainian nationality. This complicated in-between for the teenager is suddenly amplified by the protests catching fire in Kiev, on Maïdan Square, a revolutionary fever against a power that defends itself violently, with Olga’s mother on the front line. The young gymnast intensely absorbs these explosive events through interposed images (exclusively videos taken with phones) in the great quietness of the Swiss plateau where she furiously trains since the Stuttgart Euro is approaching. There is a permanent underlying tension (perfectly inhabited by the protagonist) and an interior conflict that intelligently echoes more widely the game of dualities between Switzerland and Ukraine, where the budding revolution against Russia-backed Ukrainian President Yanukovych was taking place in Maïdan Square in Kiev in 2014.

In high level sports as in revolutionary engagement, we are put to the test and we put ourselves to the test: difficult choices, perseverance, and some risks are essential to pursue those ideals. Such is the heart of the subject tackled in Olga. In Olga’s world of gymnastics, it is all about the Jaeger, the Tkatchev, magnesia, strappings on the wrists, spectacular bar releases, pounded outings, and repeated heavy falls in training. Director Elie Grappe explained that before this film, he had worked on several documentaries set in music academies and got inspired to make this film after talking to a young Ukrainian violinist who had immigrated to Switzerland in the heat of the Ukrainian revolution of 2014. In Grappe’s words: “Her story and the pictures of the revolution I saw impressed me very much. I found in it the topics for my first film: the political aspect, which is a more general one, and young people’s passion, with which they follow their dreams and which pushes them to their limits, which is a more individual topic.”

Probably what is most impressive about the film is the seeming documentary quality of Anastasia Budiashkina’s performance as Olga, who is an actual gymnast and not a professional actor. Grappe relates how he found Anastasia for the role: “I saw Anastasia Budiashkina for the first time at the European championship in Bern in 2016. I was just starting with the script. At the beginning of 2017, I went to Kiev and wanted to meet with athletes, in order to give the story the most realistic details and the most authentic background possible, even though all the characters are fictitious. So, I entered the gym and some approached us and were very curious. Anastasia, however, wasn’t paying attention to us at all. She was completely absorbed in her training. I was immediately fascinated by her intensity.”