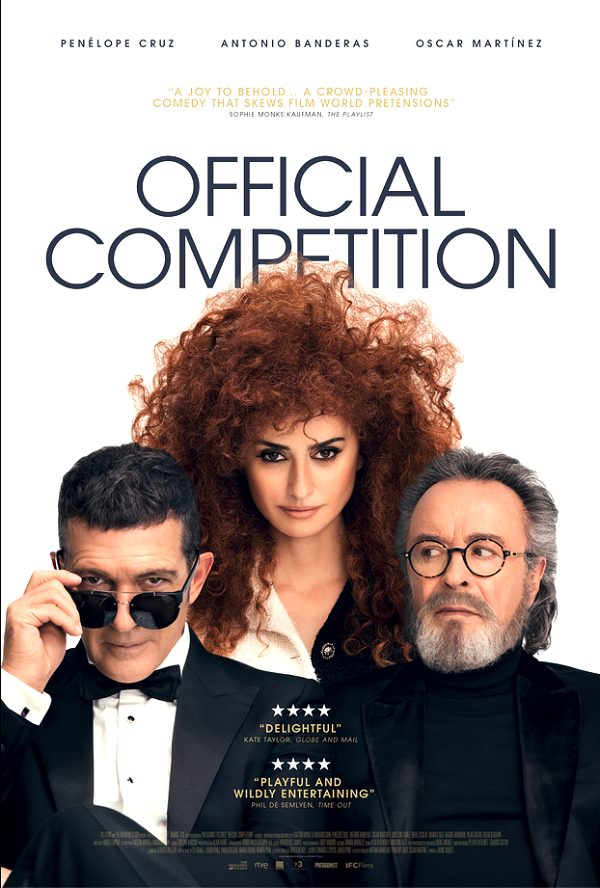 Over the weekend, Mariano Cohn and Gastón Duprat’s Official Competition (Spain, 2021) arrived at the Laemmle Royal Theatre in West Los Angeles. Like a stage production, Official Competition lives and dies on the strength of its actors: Penélope Cruz, Antonio Banderas, and Oscar Martínez. The struggle of egos between its three protagonists, each dysfunctional in their own way, plateaus around two thirds of the way into the film. This is another film about filmmaking, but it escapes hermeticism by homing in on actors and acting – not just the profession but the existential condition of having to perpetually convince each other (and ourselves) of our significance.

Official Competition begins with Humberto Suàrez (José Luis Gómez), an entrepreneur in the pharmaceutical business, realizing on his 80th birthday that he lacks prestige despite his obscene wealth. Initially, he mulls over financing a bridge and handing it over to the state in his name. Then, very much on a whim, he decides that producing a film would be better. Never mind that he knows nothing about films. He supposes that adapting the best talent that money can buy will not only assure the film’s critical success but also accentuate his importance.

With this in mind, Humberto buys the rights to a Nobel Prize-winning novel, Rivalry, and hires acclaimed arthouse director Lola Cuevas (Penélope Cruz) to adapt it for the screen. In a scene fusing sly humor and attention-grabbing cinematic artifice with a startling pathos, Lola reveals her plan to cast blockbuster star Félix Rivero (Antonio Banderas) against actor’s actor Ivàn Torres (Oscar Martínez) as the novel’s disputing brothers. She then summarizes the novel’s plot for Humberto, who’s “not much of a reader,” as he spoons an extravagant sundae.

Lola gets caught up in her own retelling and a close-up reveals her rapt expression as Erik Satie’s proto-ambient “Gnossienne: No. 1” glides over the soundtrack. Humberto, too, succumbs to the story’s spell, a spoonful of ice cream poised inches from his mouth. Just before she tells the entrepreneur how the novel ends, Lola takes a breath and Cohn and Duprat cut to an exterior shot of her house. We see her gestures through the window but hear only the eerie chords of Satie’s composition. The scene exemplifies Cohn and Duprat’s sense of humor and deployment of static camera to heighten the still-life geometries of their shot compositions. At the same time, it provides nearly the entire plot of Official Competition’s film-within-the-film, or, rather, a skeletal outline waiting to be fleshed out.

Soon, Humberto all but disappears from the film as Lola cultivates a latent rivalry between Félix and Ivàn, subjecting them to all manner of ego-lacerating exercises, such as having them read a tense scene while seated under a massive boulder suspended from a crane. The boulder, a performer in its own right, turns out to be a cardboard prop. As viewers, we’re shown none of the film-within-the-film, only the rehearsals that take place entirely in Lola’s starkly minimalist house. This invitation to us to imagine a film solely on the basis of acting inevitably recalls Lars von Trier’s Dogville (2003) and Peter Watkins’s La Commune – Paris, 1871 (2000).

The movie is stagey in the extreme and its actors are all competing for our attention. Penélope Cruz in particular strikes a captivating balance between the expressive and the inscrutable, as her character all-too-expertly manipulates the self-obsessed Félix and Ivàn, even at the expense of her adaptation. By the end of Cohn and Duprat’s film, real and fictional rivalries violently collide. Official Competition co-directors Gastón Duprat and Mariano Cohn would rather offer viewers a no-concept, light and breezy big-screen hangout, betting that audiences will turn out to watch a pair of beloved celebs cut loose, and that the actors’ megawatt charisma will be enough to carry the show.

At least for a certain amount of time, the bet pays off. With that bit of throat-clearing good and done, we arrive in the tycoon’s architecturally expressive locale with his chosen team: brilliant but neurotic director Lola Cuevas (Cruz), cocky Hollywood bigshot Félix Rivero (Banderas) and highbrow method man Iván Torres (Oscar Martínez).

Soon we’re off to the races as the two bickering leads take an instant dislike to another, giving the film’s test title another kind of resonance. Over the weeks rehearsing for the upcoming shoot – an overwrought melodrama about two warring brothers, named, naturally, “Rivalry” – they start competing for their director’s attention and for bragging rights as to who is the better performer.

Stage and screen actor Martínez and recent Oscar nominee Banderas both play with comically exaggerated versions of their public personas, with Banderas strutting around as the swarthy Hollywood lothario (asked whether his many children were all with the same woman, he points to his crotch. “Yup, this guy”) and Martinez as the Argentine theater actor living a life of self-serious disdain for the lower arts.

“I don’t want to be the token Latino that puts a bit of color into an industry for numbskulls,” he answers when asked if he’d go Hollywood. It might not come as a surprise that the next scene finds him practicing his Oscar speech in the bathroom when he thinks no one is looking. Such is the simple set-up/payoff style of the film, which leaves nothing at stake and no one the butt of the joke for too long.

Only Cruz plays a character further away from her public image, not really riffing on any one figure in particular but playing her harried film director as a composite of every unstable auteur. In order to elicit greater emotional depth from her two leads, the director comes up with a series of elaborate exercises, which make up the backbone for the narratively slight shenanigans. In one perfectly illustrative example, Cruz’s character has her two actors perform their lines as a crane dangles a massive boulder over their heads. We know no one is really in peril – no one could be in a film this effervescent – but the scene works all the same, carried by three performers’ delightful screen presences and effortless comic timing as they find new shades of discomfort to play.