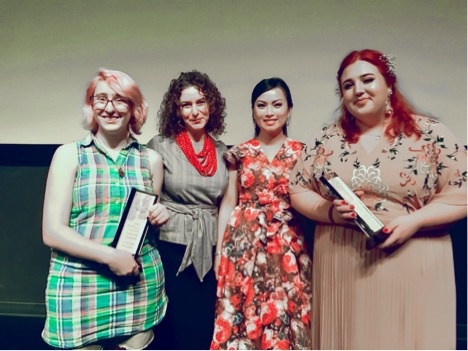 NEW YORK, NY (July 12, 2018) – New York Women in Film & Television (NYWIFT) is pleased to announce the latest recipients of NYWIFT Scholarships and Awards. With support from the Ha Phuong Foundation this year, the newly re-branded NYWIFT Ha Phuong Scholarships provide a $5,000 scholarship each year to a second-year female film student at the Brooklyn College Feirstein School of Cinema, City College of New York, Columbia University, New York University, and the Stony Brook/Killer Films MFA in Film program. Prizes for $2500 each are also given to two undergraduate students from the School of Visual Arts. On May 8th, 2018, Ha Phuong was joined by NYWIFT Board President Simone Pero to present the prizes onstage at the Dusty Awards. The Dusty Awards are the culmination of the SVA’s Dusty Film and Animation Festival, an industry showcase of the work of BFA Film and BFA Animation students. Emilie Simonini (BFA Film) and Kira Clines (BFA Animation) received the awards.

“I am both incredibly honored and humbled to receive this award alongside my dear friend Emilie Simonini,” said SVA scholarship recipient Kira Clines. “It is my hope that I will continue to uphold the values [NYWIFT and Ha Phuong] stand for as I go forth into my career in this male-dominated industry. I hope to inspire and empower women and non-gender conforming people as [NYWIFT and Ha Phuong] have already inspired me.”

Students are nominated by faculty at their respective institutions. The 2018 NYWIFT graduate scholarship recipients are: 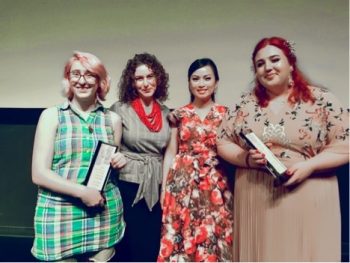 “New York Women in Film & Television is committed to supporting women at all levels of their film, television and digital media careers, including these bright, talented young women who we are glad to welcome into the NYWIFT community,” said NYWIFT Executive Director Terry Lawler. “We are also grateful to Ha Phuong for her added support this year, which allowed us to expand the scholarship at SVA to a second student for the first time.”

The Ha Phuong Foundation is one of the largest of its kind and was founded by Vietnamese actor, singer, writer, philanthropist and NYWIFT member Ha Phuong (HP), as a result of her passion for music and her fierce devotion to supporting young people’s causes.

“I am proud to nurture and elevate these successful young women as they begin their professional lives,” Ha Phuong said. “NYWIFT’s scholarship program provides vital support to the next generation of our industry, part of its continued efforts to level the playing field for women.”

The financial assistance provided by these scholarships allows these future media makers to pursue their own projects, while also giving them access to the one-of-a-kind networking and professional development opportunities for which NYWIFT, the preeminent entertainment industry association for women in New York, is known. Past scholarship recipients have gone on to diverse and illustrious careers. Since its inception, the Scholarship Fund has provided assistance to nearly 60 students.

In addition to the NYWIFT Ha Phuong Scholarships, the NYWIFT Sabrina Wright-Gilliar Scholarship, named for the legendary props master, is awarded to a female high school senior graduating from the Academy for Careers in Television and Film (TvF). This year’s scholarship was presented to Giselle Arellana at the school’s graduation ceremony at Symphony Space on June 26th, 2018.

Read more about the Scholarship Fund and watch interviews with past recipients at: http://www.nywift.org/article.aspx?id=SCHOL

New York Women in Film & Television (NYWIFT) advocates for equality in the moving image industry and supports women in every stage of their careers. As the preeminent entertainment industry association for women in New York, NYWIFT energizes women by illuminating their achievements, presenting training and professional development programs, awarding scholarships and grants, and providing access to a supportive community of peers. NYWIFT brings together nearly 2,500 women and men working both above and below the line. NYWIFT is part of a network of 50 women in film chapters worldwide, representing more than 15,000 members. NYWIFT is a nonprofit 501c3 public charity.

More information can be found online at: www.NYWIFT.org