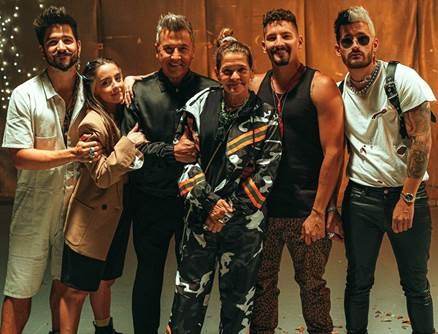 Miami, Fl. (April 19, 2021) – NTERTAIN, the recently launched powerhouse multimedia company from NEON16’s Lex Borrero, music mogul Tommy Mottola and Range Media Partners, announced today the start of the development and production for its first original series, Los Montaner. The unscripted docu-series will give fans an exclusive look inside the most viral and influential family in Latin music, the Montaners.

In addition to captivating the attention of the world with chart topping music, The Montaner family have become household sensations through their social media audience of over 150 million and over eight billion video content views. Borrero will executive produce the series, with Range Media Partners co-financing the project, handling global sales of the series. Production will shoot globally, as the crew follows the daily life of the Montaner family.

Los Montaner will follow the iconic family’s evolving love stories, professional careers and conflicts as they balance maintaining their Christian values and their rock & roll family dynamic. After four decades of success, iconic artist and singer-songwriter, Ricardo Montaner has five children, Alejandro and Hector from his previous marriage and Mau, Ricky and Evaluna with his wife, filmmaker Marlene Rodriguez. The couple have been married for 31 years.

In 2019, Evaluna Montaner, star of Nickelodeon’s “Club 57” married Latin Grammy® winner and global pop sensation Camilo. After a fairytale romance, their love led them to the altar to declare their “I do’s”. The young and bohemian-like pair, who met in 2015, are documented navigating through life as newlyweds, budding careers and managing becoming one of Latin music’s most famous couples.

Their sons, Mau and Ricky’s work has proven to be a hit making machine crafting some of Latin music’s biggest songs as artists, songwriters and producers.  Mau Montaner and his wife, creative director Sara Escobar, who have been together for about 7 years bring their share of funny antics and their inseparable love as the “grown ups” of the Family.  Ricky Montaner and his actress, model & TV personality fiance, Stefi Roitman are the “rebels” in the family and now are heading to the altar on what’s sure to be the wedding of the year.

“This last year that passed, among other things, served as a way to spend more time together, more than ever and to partake in profound dialogue about all that is going on, with our careers, personally and everything really,” expressed the family patriarch. “Within these conversations we discussed our thoughts on us wanting to possibly do a show together and in this form convey to the world what family unity means to us…to communicate that together we can be happy amidst the circumstances, no matter what comes at us.”

“We are excited to announce our first production under NTERTAIN with the iconic MONTANER family. In a cross-generational series, viewers will get to witness for the first time the intimate, raw aspects and relationships of one of Latin entertainment’s most famous families. Being the first show of its kind in the Latin space, this series brings together different generations to watch and live this unique experience along with the family,” said Ntertain.

The series will feature:

NTERTAIN was founded earlier this month by NEON16 co-founder and industry veteran, Lex Borrero, legendary music mogul Tommy Mottola and top representation firm Range Media Partners as a new entertainment and media company focusing on the creation, development, and production of premier content across all mediums. With decades of collective expertise, the 360° company and online broadcaster will bring Latin stories to the forefront by representing the global power and success of Latin talent, brands and culture.