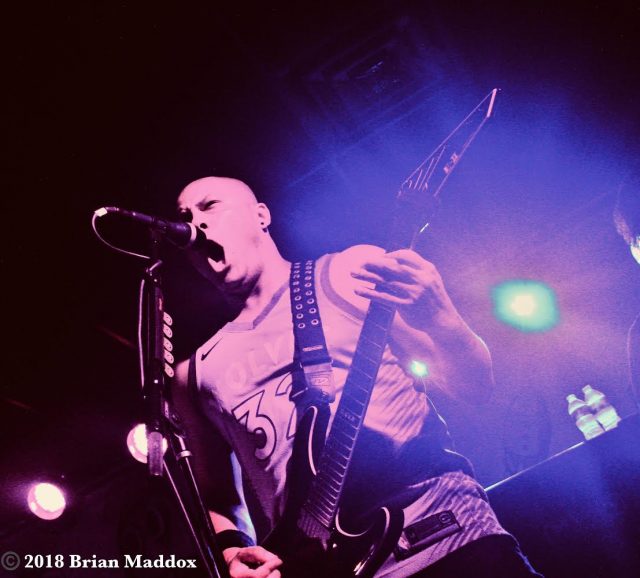 Alpharetta, GA (The Hollywood Times) 08/12/2018 – For music fans during the dog days of summer, nothing beats catching a live outdoor concert. Scores of fans young and old sporting their favorite bands t-shirts, high priced refreshments, eye catching merch tents and the sweet sound of live music permeating the balmy summer air, thereby exuding a feeling of equality in the world for just a few brief hours. Watching parents introduce their teenage sons and daughters to their first concert experience and catching looks of profound satisfaction on their faces during an electrifying set is truly gratifying. Make that 4 electrifying sets.

The Verizon Wireless Amphitheatre in Alpharetta, GA was host to a U.S. headlining tour with Five Finger Death Punch and Breaking Benjamin, with special guests, Nothing More and Bad Wolves. Each band has had their fair share of success throughout the course of their respective careers, and has amassed legions of fans along the way.

Los Angeles metal unit, Bad Wolves, began as a supergroup of sorts with the formation of guitarist Doc Coyle (ex-God Forbid), drummer John Boecklin (ex-DevilDriver), vocalist Tommy Vext (ex-Divine Heresy, Snot), bassist Kyle Konkiel (ex-In This Moment) and guitarist Chris Cain (ex-Bury Your Dead), and has now become the band to watch for in 2018 with the success of their debut album, Disobey. Steadily ascending the charts with their superlative rendering of the Cranberries 90’s classic, Zombie, and garnering a secure fanbase in the process with their dynamic live shows, it’s safe to say that Bad Wolves are just getting started.

From San Antonio, Texas, Nothing More has quickly established itself as something special in the metal community. Earning spots on the Billboard Mainstream Rock Chart with singles, This Is The Time (Ballast), and “Jenny,” Nothing More continues to prove itself a worthy entity, with no signs of stopping anytime soon. Their latest album, The Stories We Tell Ourselves, yielded a #1 hit single on Rock Radio with Just Say When, clearly demonstrating that Nothing More can adequately deliver the goods.

Formed in 1999, Wilkes-Barre, Pennsylvania rockers, Breaking Benjamin, exploded onto the scene with their 2002 debut album, Saturate, and has since accomplished accolades in the way of three RIAA-certified platinum records, numerous gold and platinum singles and their 2015 album, Dark Before Dawn peaking at #1 on the Billboard 200. As the central songwriter, vocalist Benjamin Burnley enjoys keeping his writing vague in order for the fans to draw their own conclusions, the way music is intended to be.

As for Las Vegas’ Five Finger Death Punch, their 13 year career has taken the band to every corner of the globe, connect with their ever expanding fanbase, and generate hit after hit with their broad catalogue. Founded in 2005 by guitarist Zoltan Bathory and vocalist Ivan Moody, the band made its mark with their 2007 debut album, The Way of the Fist, introducing their own pronounced brand of muscular thrash. Hits like Under and Over It, Wrong Side of Heaven and a groove heavy cover of Bad Company are just the tip of the iceberg when it comes to the diversity that Five Finger Death Punch offer to the masses.

With the purchase of a ticket, each co-headliner will donate $0.50 towards charity organizations chosen by each band. Breaking Benjamin’s contributions will go towards Prevent Child Abuse America, while Five Finger Death Punch will donate to C.O.P.S – Concerns Of Police Survivors, an organization that strives to reshape the lives of survivors affected by deaths in the line of duty.

Four great bands, plus one massive U.S. tour with a great cause equals a perfect cap to the summer of 2018.