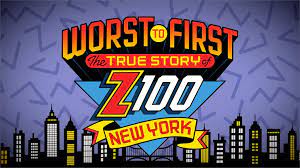 From worst to first, this documentary ignites audiences with the legend behind Z100 radio.

New York City, NY (The Hollywood Times) 2/9/2022- “Anything is possible” was the tagline of Mitchell Stuart’s business card as he climbed the ladder to success.

It’s a sentence we often hear but few believe.  If you can get past the skeptical eye rolls of the majority, you might just find a group of people willing to make it happen.  This is the spirit of entertainment—turning dreams into reality.  So if you are reading this feeling starry-eyed maybe you’re one of the few ready to become someone great.

It’s a “David and Goliath” story and according to Stuart, “the story is everything.”  So if the musician turned producer and director is ready to dig up the truth, it’s wise to tune into the details of this documentary, Worst to First: The True Story of Z100 New York.

Stuart has for us the story of a man who came from nowhere and proclaimed himself a giant of the music industry, waving to the majority from the top of the Empire State Building like a powerful and (maybe manic) figure.  It’s the man, Scott Shannon, and he made the famous Z100 radio station what it is today, breaking the sound barrier with a wild transition from worst to first.  In just 74 days, DJ legend Scott Shannon trumped radio greats everywhere by landing top of the charts in 1983.

“There’s not enough against all odds stories,” says the director.

So, if you’d like a 101 (or in this case Z100) on how to go viral, maybe Stuart and Shannon have some worthwhile tips.  Shannon, after all, invented “viral” before the internet was cool.  Shannon came from a Midwestern suburb and after watching a disc jockey roll out the tunes, he was hooked.  He wanted to do exactly that and quickly made his presence known by creative rough-housing in the industry.  He called his show  “The Morning Zoo” and included a wild assortment of personalities and aggressive tactics.  After his success in Florida, he was asked to move to Secaucus, New Jersey.  There, Shannon took on the mammoth of New York City with what would be a “flame thrower.”

The Z100 station started off at the bottom of the charts.  Shannon’s response to the dreaded results was described as a vein-bulging, red-faced fury.  “We suck!” he declared to his team.  From then on Shannon and his team were out to wage a war with the giants.  “Get out of our way,” stated the radio station as it introduced itself, challenging every popular station to look out.  From there, Shannon called upon the audience to engage in what was the equivalent of social media “sharing” before it went digital, telling listeners to make bumper stickers and bring along their friends with contagious energy.  His successor, Elvis Duran, observes, “he wasn’t frightened by the city and intimidated.”

In what would be a colossal victory, Shannon plowed through and ended up as the number one radio station in New York City and ultimately the world—a renown the radio station has maintained under the charge of Elvis Duran.

“He has the closet thing to x-ray vision of anyone I’ve ever met,” the director describes of Shannon, explaining that he sees the intention of people and understands the message they are trying to convey.

“He understood that I was a music person,” Stuart elaborates.

It’s obvious that Scott Shannon has a passion and drive for music itself.  And just like the disc jockey, director Mitchell Stuart is a kindred spirit.  During my interview with him, I’m given a firsthand view of Stuart and his wide array of guitars (all of which he can play).  More importantly, his tone and demeanor project a soulfulness of belief.  His back story might in some ways parallel Shannon’s.  He grew up in Brooklyn and his father worked two jobs.  He didn’t have much but he had a passion for music.

“I was five years old and my sister said to me, ‘close your eyes and what do you see?’ I said, ‘I hear music and I see myself on stage.’”

With a 3D immersion in the creative experience, Mitchell Stuart found himself venturing from music to filming, scoring, creative branding and more.  He the creator of the music-centric digital series “Stripped.”  He also is a NY Emmy Award winner for his incendiary show “The Road to MSG,” cataloguing the journey of well-known artists to Madison Square Garden.  “Music really elevated me,” he explains.  It’s with that elevation that both Stuart and Shannon came to know success through passion and artistic fervor.

In Stuart’s words, “documentaries give you the unique opportunity to tell either big stories or small stories.  I’d like to find the small story in the big story and make it personal.”

Documentaries have been making their entrance into the streaming world.  We went from fantasy to reality and now we land on a hybrid of the two.  Not only do documentaries satiate our craving for truth, but they speak it out in a way that tells story.  Worst to First achieves that and imitates the lightning pace of our modern world.  The editing is quick and the effects are engaging.  It features major players in the music industry like Elvis Duran, Jon Bon Jovi, and Joan Jett.  It’s a documentary that offers real life story telling with personality as big as the man it features.

“The story will find itself if I look hard enough,” says the music doc guru.  “I’m going to tell the truth of what I find.”

He’s sitting in his living room as he says this to me on a typical cold Tuesday in February, but the encounter feels anything but.  There’s something familiar and electric about Mitchell Stuart that starts with his attitude and goes on with his well thought remarks.  He seems to have both the introspection and zeal of all creatives that capture us.  “I lived in my head,” he remarks in an all too familiar statement.

Worst to First: The True Story of Z100 New York is available for preorder on AppleTV and will be released to all cable and streaming networks this February 11, 2022.

What might it take to conquer giants and slay enemies?

It could be the thrilling energy that led David to unleash his fatal blow.  It’s a phenomenon that happens first inwardly—maybe to a boy in Brooklyn, or a fanatic in the Midwest—and then shoots out from there with electric force that ignites millions.  That’s the narrative of Z100 and Scott Shannon.  And that as well is the narrative of Mitchell Stuart’s story.