Pasadena, CA (The Hollywood Times) 1/18/20 – Icon in the making and Crazy, Rich Asians star Awkwafina- government name: Nora Lum- is back on the small screens with a hugely hysterical role: Awkwafina is Nora from Queens! The 30-something actress ironically dives into character ‘Nora’, hilariously capturing some aspects or the rap stars own life, and how ridiculous and relentless adulthood can be! Viewers follow the shenanigans of Nora through the city of New York while the woman longs to get, and keep her sh*t together! 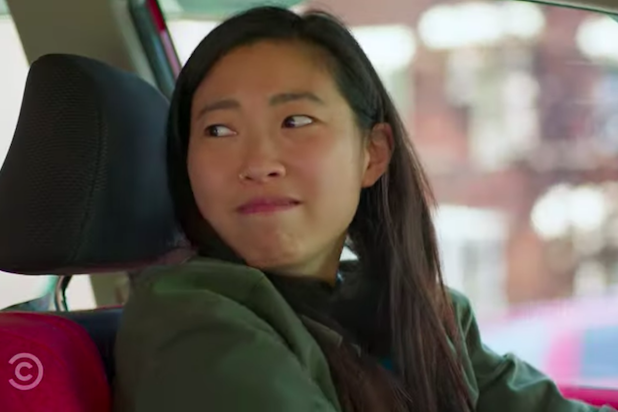 Some hesitation might surface from critics around Nora from Queens being a storyline that has been explored in depth in other TV shows. However true, the writers and producers made sure that storylines and arch’s exist in this show in a way that has never been seen before. Executive producer Lucia Aniello proclaims, “ I think that inevitably we’re looking at a show that is about a 20-something woman in New York figuring it out, and so inevitably there’s gonna be a little bit of crossover. But I think that — crossover because we’re dealing with a lot of universal themes, like what do I wanna do, who am I in life, and what do I wanna be and how do I get there. But I think what’s great about this show is it kind of takes, okay well here’s this kind of existential question, and then — you know those little exercise balls, that have little nubs on them, and then you throw them, and then it goes in a different direction, then you don’t know which way it’s gonna go.” Whether the show is comparable to what we have since experienced or not, this is the first time ever that audiences will be exposed to a young Asian-American woman being the focal point in an existential crises; for that fact alone this series is ramping up to be significantly original.

With the increasing representation in media of the Asian American experience, shows like Nora from Queens seems that much more important and necessary. Nora Lum declares, “I remember the first Asian-American sitcom that premiered.  It was Margaret Cho’s “All-American Girl” and I remember that being an event. And I was probably already in grade school about to go to middle school and that was the representation that I had and it was a big moment. When you look at the progress that we’ve made since then it’s been incredible, but I think that these shows still kind of stick out as very genre-specific Asian-American shows.  But I think that slowly and slowly as these shows become more ingrained as American as we are, they’ll start to flow into the genre I think a little bit more broadly.”

We are definitely so excited for the premier of the highly anticipated Awkwafina is Nora from Queens -only on Comedy Central on January 22nd; 10:30 PST!