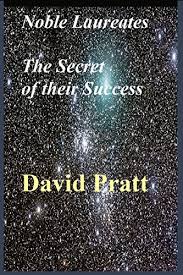 By Dr. Laura Wilhelm, LauraWil Intercultural
West Hollywood, CA (The Hollywood Times) 11/2/16 – This reporter started to reflect upon the rise and fall of the best and the brightest when a family friend passed away on August 24th, 2016. This was Dr. Roger Tsien, winner of the 2008 Nobel Prize in Chemistry. Her father, Dr. William B. Kristan, Jr., a Distinguished Professor Emeritus at UC San Diego, was proud to call Dr. Tsien his colleague along with many other Nobelists.
Roger’s health was never robust, and the stress of the media circus surrounding his Nobel win may have hastened his demise. He is likely to win other Nobel and major scientific awards posthumously. Tsien’s classic work on following the progress of Alzheimer’s and tracking cancer cells will leave an indelible legacy.
UCSD was founded in 1960. The college immediately started to attract top science talents like Tsien and Kristan from world class Ivy League institutions such as Harvard and the University of Pennsylvania to fill its faculty positions. Few could resist UCSD’s cool Southern California vibe and fun in the sun approach to science.

But UCSD proved to be much more than a party school despite its annual Watermelon Queen competitions! In the space of 50 short but scintillating years it was starting to take its place as a research institution of choice, sometimes edging out the competition back East as well as better established California institutions such as Stanford and UC Berkeley.

During these same 50 years UCSD racked up 20 Nobel Laureates (including Dr. Tsien) at the rate of four per decade. National Geographic recently named San Diego a World Smart City thanks to standout institutions like UCSD.
How could all of this have happened so quickly? What power do Nobelists possess that allows them to exercise so much impact?
Dr. David Pratt attempts to answer questions like these and many more in his new 197-page book NOBEL LAUREATES: THE SECRET OF THEIR SUCCESS (www.davidpratt.ca). A longtime teacher and freelance writer for scholarly and literary publications, Dr. Pratt has published eight books.

Advertisement
No doubt Nobelists have much to teach students, scientists, writers, world leaders, and proponents of peace. And perhaps they can also motivate us ordinary citizens who want to break out of the box and become much bigger!
This reporter was presciently named Laura, meaning “crowned with laurels” in Latin. She has wanted to win a Nobel Prize ever since she could remember! What should she do?
According to Pratt, it didn’t hurt that she was born in the United States to a well-educated middle-class family with one ultra high achiever in science. During the period 1901-2014, 339 Nobel Prizes were awarded in the USA. Compare this with 110 in the UK, 82 in Germany, 59 in France, and 30 in Sweden where the prizes originated with Alfred Nobel. (page 24)

But alas, she was born female instead of male! This makes a Nobel win for her orders of magnitude less likely. By 2014 only 47 women had been awarded Nobel Prizes in the six categories of Physics, Economics, Chemistry, Physiology/Medicine, Literature, and Peace with only two in Physics, two in Economics, and five in Chemistry. Compare this with 817 men! (page 34)

Like Roger Tsien, numerous Nobel recipients in the United States have been foreign born. Many have fled catastrophes in other parts of the world such as wars and genocides. Pratt quotes Dr. Eric Kandel, another old Kristan family friend who won the Nobel Prize for Physiology or Medicine in 2000 after escaping from Austria during Hitler’s reign and the Nazi Holocaust.
Nobel Peace Prize recipients in particular have often suffered extremes of imprisonment, torture, starvation, exile, and social ostracism following the dictates of conscience. Well-known examples are Martin Luther King, Jr. (1964), Elie Wiesel (1968), and Nelson Mandela (1993). In 2014 seventeen-year-old Malala Yousafzai became the youngest Nobel Peace Prize recipient to date after she was shot in the head and nearly killed by the Taliban defending the rights of girls to become educated in her native Pakistan. 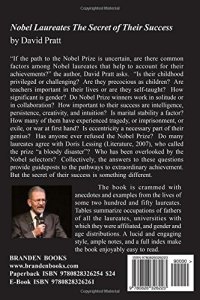 Nobel Literature Prize recipients come from all across the board. The decisions for the Literature prizes sometimes seem capricious.
Count Leo Tolstoy of Russia is still one of the most renowned non-recipients of the Nobel, with the prize going to many lesser writers during his lifetime. Songwriter Bob Dylan is 2016’s surprise winner of the Nobel Prize for Literature “for having created new poetic expressions within the great American song tradition.”
So Nobels can go to the children of privilege and the children of poverty. They are awarded in good times and bad. And they reward innovation and creativity above all. So can we predict who will win one?
Many Nobelists show high intelligence from early childhood. Dr. Pratt does not mention one of this reporter’s favorite Nobelists, Dr. John Nash, recipient of the 1994 Nobel Prize in Economics.
Nash was a child prodigy whose typewritten 28-page doctoral thesis composed at Princeton in 1950 put him on the road to Nobel glory despite disabling bouts of paranoid schizophrenia throughout life. At the age of 86 his life ended tragically in a car crash as he and his wife were returning home to New Jersey from Oslo, Norway following Nash’s receipt of the prestigious Abel Prize in Mathematics with a cash award of $800,000. He was still teaching math at Princeton!

Associations with elite schools like Princeton are common for Nobelists, as are high longevity and sustained productivity throughout life. Many Nobelists shun retirement and become busier than ever with age.

Advertisement
It is of course this commitment to their talents and causes that puts Nobelists in a class by themselves. The extraordinary courage in their hearts is at least as important as the exceptional capabilities in their heads.
As David Pratt concludes, “All Nobel laureates. . .are universally marked by a passion for their work that cones close to obsession, a level of industry and application that are extraordinary, a near-total immersion in their field of endeavor, and a dedication that makes their work supremely fulfilling. And this is the secret of their success.” (page 163)

There are NO shortcuts to success! Read NOBEL LAUREATES: THE SECRET OF THEIR SUCCESS if you wish to be inspired by the ones who have worked harder to reap rewards than most others in this world.