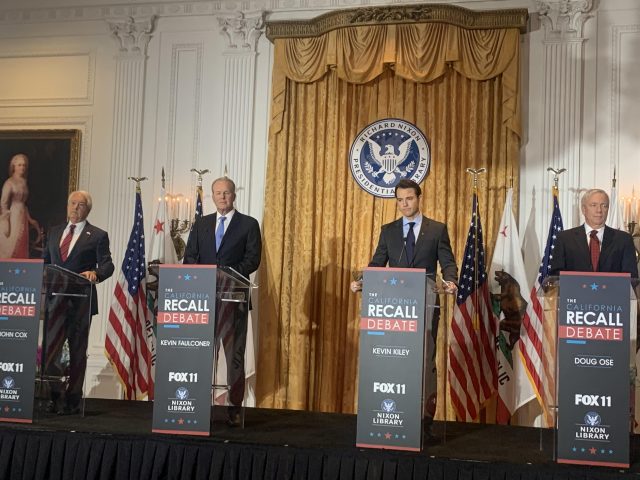 Los Angeles, CA (The Hollywood Times) 8/5/21 – On the heels of a just-released KABC/Survey USA poll, the first to show “Yes on Recall” leading by double digits (51-40), Fox 11 and the Nixon Library hosted the first debate of the short recall season. I had the honor of being one of the select audience to watch the live event, which Spectrum News covered, just a few feet away from John Cox, Kevin Faulconer, Kevin Kiley and Doug Ose. Noticeably absent were the sitting Governor Gavin Newsom, frontrunner Larry Elder and media sensation Caitlyn Jenner. 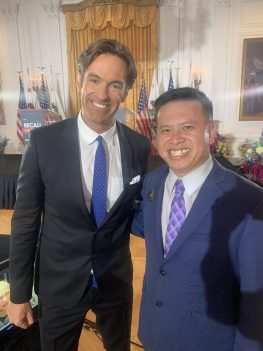 From a “Yes on Recall” gathering thrown outside the Nixon Library featuring many Elder signs before the debate, to AM870 The Answer’s table inside the Nixon Library full of Elder gear, to a direct question in the actual debate to John Cox asking about his support for Larry Elder’s stance about minimum wage, it was clear Elder was the frontrunner.

Initially, I, and many other armchair quarterbacks, said, “Why isn’t Elder here? He should be making his case known to the audience and the people watching TV.”  After the debate, I saw the wisdom of the Sage of South Central not being there. The other four candidates deserved all the time they could to get their message out, as partners to getting this recall through, and that they did. They also showed the public the most important things for the recall effort: unity and actual solutions. 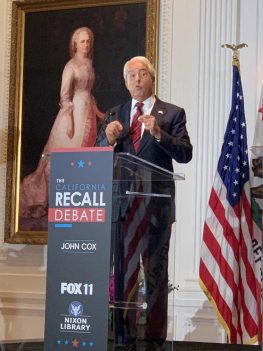 California is fortunate and blessed to have these candidates running.  For decades, we have had weak candidates running on the Republican side, lacking energy and seen as out of touch, from Meg Whitman to Neel Kashkari. Even John Cox, in the last election, which was seen by people on the ground as having a low visibility campaign, has now come to life in his second try. Establishment favorite Kevin Faulconer took some bold stances at the debate, including accepting the support of President Trump in a hypothetical scenario, though his position on vaccinations was not as strong. However, Republicans playing prevent defense have become such a norm, that the bold stances taken were a breath of fresh air. Generally, everyone was in consensus around the issues.

Caitlyn Jenner and to a lesser extent, Larry Elder were smart to get out of the way, as their bigger than life brands would have overshadowed the debate. We all know Elder’s positions and a simple Google or YouTube search will reveal in depth monologues on Elder’s pontifications about public policy. As a community leader, from the lens on the betterment of the people getting the most information out there, I felt today’s talk on actual issues from the water crisis, the environment, law and order, shutdowns, mask mandates to partisanship and working with Democrats, were a long time coming and all candidates addressed them with substantial answers. 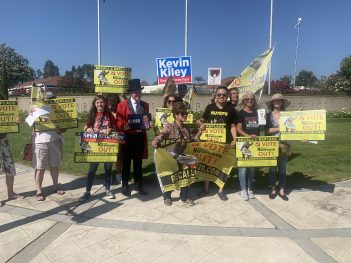 Not a second was wasted, thanks to moderator Hugh Hewitt. Hewitt gave us a potpourri of questions that focused on the true pulse of where Californians are at. Californians have real problems like cities burning down, rising water and electricity costs, increased crime, gas prices shooting up and restrictions on basic freedom and mobility. I was thankful these debates didn’t devolve into tired and divisive social issues.

John Cox 2.0, second or third place, in most polls, showed exuberance and answered questions, especially the tricky “minimum wage” question, with strength, clarity and humor, highlighting his own growth as a candidate. Just two years ago, with unemployment at a record low, it would have been shocking to answer “zero” minimum wage and to let the free market decide, but today, when so many restaurants and businesses were shuttered due to COVID lockdowns, people understand the reality that many are lucky to have a job and that businesses are truly struggling just to make it and simply cannot be crippled by regulations. Let the free market decide, and stop preventing business owners from getting the help they need, because $15 an hour is more than many small businesses can afford. Similarly, AB5 and the government overreach prevent people from having the flexibility to work part time, which was discussed eloquently by both Kevin Kiley and Doug Ose.

Kiley’s bright and thoughtful answers, especially on rejecting premises of partisanship when asked who he would appoint as governor if Senator Feinstein was to retire, were refreshing to hear. Ose took a more populist bent, highlighting his farmer roots. All candidates were respectful to each other and thus, were able to shine. Ultimately, this also showed to the public a Republican Party that may finally be awakening from decades on life support, with clear positions and solutions, collaboration and unity that, because of the special rules around recall elections, need to work together apart to create a “bottom up” energy for “Yes on Recall”.

It is this unity and confidence in a common platform but diversity in candidate backgrounds that will draw out more supporters for each candidate to add to the overall effort, as the GOP lacks any top-down power in this state. At the debate, the overall vision was such a clear and stark contrast to the status quo, that it is not a surprise, 1 out of 4 Democrats are supporting this recall and an overwhelming majority of Independents. The right needs to convince people through strength, not bend to the left in weakness.  Kudos to Fox 11, Hugh Hewitt, Cox, Faulconer, Kiley and Ose for accomplishing this at the Nixon Library.

Marc Ang (marc@aib2b.org) is the President of the Chinese American Citizens Alliance in Orange County, co-chair of “Recall Gascon Now”, was the Director of Outreach for the “No on 16” campaign, a community organizer in Southern California and the founder of AsianIndustryB2B who specializes in race relations and the minority conservative experience. His book “Minority Retort” will be released in late 2021.